172@29@17@138!~!172@29@0@53!~!|news|business|economy|discoms-to-have-zero-losses-2019-onwards-piyush-goyal-1464647.html!~!news|moneycontrol|com!~!|controller|infinite_scroll_article.php!~!is_mobile=false
Upcoming Webinar: Analyse the security landscape of digital payments at 11 am on October 20. Register now!
you are here: HomeNewsBusinessEconomy

Sources tell CNBC-TV18 the Cabinet will take up a proposal to restructure their debt this Thursday.

India's power distribution companies (discoms) could get a lifeline as early as this week.

Sources tell CNBC-TV18 the Cabinet will take up a proposal to restructure their debt this Thursday, adding that the headroom under the  Fiscal Responsibility and Budget Management (FRBM) scheme will be put to use and old loans will be converted into bonds.

This move could reduce interest costs by alteast 3 to 5 percent and interest outgo will come down by as much as Rs 15,000 crore per annum.

Below is the verbatim transcript of Piyush Goyal's interview with Anshu Sharma on CNBC-TV18. 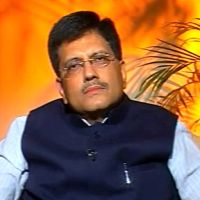 Q: How different will the discom resolution will be this time from 2012?

A: The final resolution is a collective effort of all stakeholders. The states are on board, the coal companies, the power generating units, transmission companies, all have worked together to find a permanent resolution. The big difference between the past and now is that (a) it is not foisted on the states on the top (b) it is not driven by subsidies.

It is not as if we are doling out or promising to dole out money but it is about handholding the states, it is about empowering them to be able to give electricity to everybody in their state 24/7. It is about helping them with technology, helping them to upgrade their transmission and distribution systems. So this time around it's a completely new programme. We are also looking at it in the long run to make sure that in the future there is no incentive to keep these discoms in losses and I am confident that given the bipartisan support of all parties towards this programme, it strengthens my resolve to be able to give 24/7 power to everybody in this country.

Q: You have spoken that tariff increase is not the only way out for Discom resolution. You have spoken about monitoring all the centrally bad schemes. So how soon, how much time will it take for all the seven-eight states to come out of their debts?

A: Some of them will get out of annual losses in 12 to 18 months. It will depend from state to state. However, from the Centre, some of our officials are sitting down with the state government team in a partnership model. We are not micro managing their work but we are helping them evolve their own project plans for the next three-four years. Come 2019, I feel India will have zero loss of the discoms on an annual basis.

Q: In October 2012, the fair and remunerative price (FRP) was approved. The Cabinet is yet to take a nod on this discom resolution. How soon can we expect Cabinet to meet on this?

A: Let's leave some of those decisions for the Cabinet Secretary to decide.

Q: What do you have to say about the national solar mission plan? We understand that the bid is around Rs 4.8. Is that viable and how much interest do you see coming in future?

A: I am delighted that the solar prices are coming down to levels which are very reasonable, in fact very close to grid parity now. I had always believed in that and I said it to you on your channel so many times and I believe that with economies of scale and with transparent and honest process of procuring this power, just like the light-emitting diode (LED) programme was a resounding success and we were able to bring down prices to Rs 72 against Rs 310 one year ago, similarly in solar power we have been able to substantially bring down prices.