172@29@17@140!~!172@29@0@53!~!|news|business|companies|new-banks-wont-posethreat-to-existing-ones-pros-976761.html!~!news|moneycontrol|com!~!|controller|infinite_scroll_article.php!~!is_mobile=false
Watch experts decode 'The rise of ESG investing' on October 29 at 4pm. Register Now!
you are here: HomeNewsBusinessCompanies

New banks won't pose a threat to existing ones: Pros

Rajiv Lall, MD & CEO of IDFC Bank said that about 45 percent of the outstanding credit of banking system is only to 300 corporates. About 60 percent of household savings are not in banks and hence there is a lot of opportunity to reach out to customers.

Speaking to CNBC-TV18 Rajiv Lall, MD & CEO of IDFC Bank said that since the company were awarded a universal banking licence under a different scheme than this one, they will have to go through a formal process to see how they can take advantage of the evolving view of the RBI.

"Our current banking system is concentrated on the asset side of the balance sheet and borrowing side of the balance sheet," he said, adding that about 45 percent of the outstanding credit of banking system is only to 300 corporates. About 60 percent of household savings are not in banks and hence there is a lot of opportunity to reach out to customers.

With more competition, life will become more interesting, he said, referring to new entrants in the banking space. “Banks can’t be lazy anymore,” he said.

Industry expert AK Purwar said that it a welcome move and that now organsations are ready. 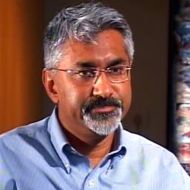 Nirmal Jain of IIFL said that they are in no hurry to apply for a banking licence. “We do have a wide branch network and can deliver on the agenda of financial inclusion. One good thing is there is no scramble; we can plan and take our time,” he said.

Regarding competition he said the new set of banks won’t pose a threat to existing ones.

Latha: What is this new change? Now you do not have to set up a non-operating holding company. If you have a single line of business, like you have, you can just convert yourself into a bank. So, do we get a reverse merger from IDFC merging into IDFC Bank?

Lall: This is a welcome development from the Reserve Bank of India (RBI). It gives us greater clarity about what could be the resolution of our rather complex structure. The technicality in of all of this is that since we were awarded a universal banking licence under a different scheme from this one, we will have to go through some formal process with the RBI to see and explore how we can take advantage of this evolving view of the RBI with respect to the need for our Non-Operative Financial Holding Company (NOFHC). So, we are quite optimistic that we will be able to resolve our situation with the RBI, particularly in light of these new regulations.

Sonia: Have you taken any internal decision on the kind of timeline on when you would go ahead and apply for this special exemption?

Lall: We are already in informal conversations with the RBI, those discussions will now gather pace. So, we hope that in the coming quarters, this will be addressed.

Sonia: Give us some timeline when this reverse merger might get completed. Will that happen in this calendar year itself? And what is the gain to the bank and to the finance company?

Lall: I cannot answer the question with respect to timing because regulatory issues are really beyond our control, but as I am signalling to you, we are engaged and we expect it to be addressed in the coming quarters.

Sonia: What have you made of the final on-tap guidelines and do you think there will be a rush for aspirants to apply or do you think that some of these non-banking finance companies (NBFC) because they are in a cyclical sweet spot, could take some time?

Purwar: I think it is an extremely welcome move. Earlier, what used to happen, they will invite applications for a certain period, work on those applications and give the results. Today, it is on tap. So, whenever an organisation is ready with the liquidity, with the policies, with the branch network and so, they would be able to apply whenever they require and get the licences if the RBI is comfortable with that.

I think it is an extremely welcome move and the way in which the NBFC landscape is there today, accepting deposit taking, some of the NBFCs have built up huge balance sheet, a branch network which is almost parallel to the small banks. In terms of asset side, they hold a high diversified asset base. So, barring deposit taking they are almost there. And so, now, since there is no urgency, they will take their own sweet time to prepare the organisation for the bank and then they will go to the RBI to get the licence. It is an extremely welcome situation, particularly from many NBFCs who have been preparing themselves for the last one decade for this position.

Jain: In fact, as Mr Purwar has pointed out very correctly, these licences are on tap and there is no hurry as such. These are once in a lifetime decisions, so why would you rush it? Maybe the earlier policy when it was open and shut and you would have to apply for a licence within a certain time period, two or three months, then you do not have a choice but, take a jump into it.

As far as IIFL is concerned, we will take it to the board and Mr Purwar is also one of our very senior and respected members, he has a lot of experience of banking. So, we will take it with all the board members, discuss pros and cons and discuss the fitment. However, a lot of things have changed. We have applied two years ago, since then, the mobile and digital technology has changed the banking landscape and more importantly, it has changed the future of banking very significantly. So, we need to consider all the facts. But on the positive side, we do have a very wide branch network; we reach out in underserved segments as an NBFC. So, we can deliver on the agenda of financial inclusion, but we need to evaluate this.

And in fact, one very good thing about this policy is that it is on tap, so there is no rush, there is no scramble and there is no time limit. We can think, we can plan, take our time and then if it is appropriate and if the board approves then we apply for it.

Latha: Is there so much of an advantage for Nirmal to even apply for a licence or is he better-off staying NBFC?

Lall: That is for shareholders to decide. There is a short-term and a long-term. I will make one macro observation in this regard and this is also where the RBI is coming from. I was doing some numbers the other day, just to put our own strategy in context and what I found is that our current banking system is actually hugely concentrated, both on the asset side of the balance sheet as well as on the borrowing side of the balance sheet.

Did you know I am sure you have some sense that 45 percent of the outstanding credit of the banking system is only to 300 corporate and on the liabilities side 89 percent of all the current and savings account (CASA) mobilised by the entire banking system comes only from the top-50 cities in the country whereas 60 percent of the country’s household savings are not even in the banks. So, what this says is that there is a lot of work still to be done. There is a lot of opportunity to reach out to customer segments that are not covered either on the asset side or the liability side of the balance sheet. And if new players that are entering the banking industry, focus resolutely on this segment, it will do the country a great service and create value for all stakeholders.

Lall: I think life will only become interesting. I think life will become really tough for those who are not willing to change and adjust themselves to the new reality. A term has been used for bankers in this country by several people. We are known to have very many lazy bankers, so there is no room for bankers to be lazy anymore. Competition and high quality of service to new customer segments is the name of the game. It should be exciting.

Sonia: There will be a lot of competition, newer business models, higher costs how do you think one should approach it?

Jain: Maybe I will add a point to your question to Mr Lall, all the payment banks and small banks, if you look at their capital, it adds up to maybe Rs 5,000 crore or even less than that, which for a USD 2 trillion economy is not even a drop in the ocean, so I don’t think that the new set of banks that are coming in will pose any significant threat to the existing players at this point in time. If they grow very well for five years, ten years or even longer then at least you can say that there is some competition, but market is growing faster and there is opportunity for everybody.

However, competition, I don’t think will be an issue. There are not too many new entrants. A country like US has got 8,500 banks and India has hardly about 100 banks or less than that. So I don’t think competition is an issue at this point in time and also almost 70 percent of our banking system is with public sector banks. They will find it difficult to raise capital at least in the foreseeable or at least in the near future, unless government does some major restructuring in terms of consolidation and recapitalising them. So the incremental credit or the market share of private sector banks existing as well as new will be from the market growth that is happening.

I think there is huge opportunity and even if you look at the payment bank and small bank, a lot of microfinance companies that are converted so they were lending in any case, so their business model remains same. It is not that they are taking away somebody else’s lunch. Therefore, I have a feeling that competition is not an issue at all at this point in time. Even the new banks that come will take their own time, after you get in principle approval it is 18 months before you set it up and then you scale up at a slow and steady pace. This is not a business that one can ramp up overnight.