It is about the coming together of two companies who have huge synergies in terms of assets that they own, says Kumar Mangalam Birla, Chairman of Aditya Birla Group.

Industry number two and three players Vodafone and Idea Cellular and Vodafone today announced a mega merger, capping off a round of consolidation in the telecom sector that has set in since Reliance Jio announced plans to enter the market. 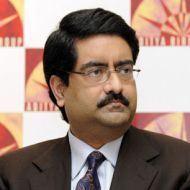 In the same interview, Vittorio Colao, CEO of Vodafone Group Plc, said the key driver for the merger was the "vision for the future" and said it was in line with government’s Digital India plan.

"The merged entity will be one of the strongest competitors in the telecom space in India," he said.

Below is the transcript of Kumar Mangalam Birla and Vittorio Colao's interview to Nisha Poddar on CNBC-TV18.

Q: My first question, is consolidation really the need of the hour in the telecom sector? Why this big move?

Birla: The primary reason and the fundamental reason is the fact that there is great industrial logic and business sense to both of these businesses coming together. If you look at the combined company, we are talking about leadership in 22-23 circles. We are talking about market share across the country, about 40 percent. Customer market share of about 35 percent. 1,850 megahertz which is a very large bank of capacity and so on and so forth.

So, basically, it is about the coming together of two companies who have huge complementarity especially in terms of the assets that they own. That comparative intensity is always an important dynamic, it is always a trigger and that is the reality. That is how the real world works.

Q: Competition is the biggest driver?

Colao: As Kumar has said, the real driver is the vision for the future. India is digitising. Digital India is a priority of the government. If you think about what will be enabled by broadband, you want it everywhere, you want it in the urban areas, but you also want it in rural areas. You want it in metros, but you want it in every single village.

And if you start thinking entertainment, new services, and payments, and financial inclusion, having a player in this country that can give all of that to all of the Indians, ensuring choice, ensuring that there are five big competitors and that Indians can choose from all of them and there will be no difference whether you live in a village or whether you live in a city, I think this is the logic.

Of course, we need to preserve competition and we intend to be one of the strongest competitors in this country.

Q: Idea Cellular is listed in India and the three numbers that come out of the transaction as stated in your press release is that 21.1 percent that you gain by way of the merger is at the implied valuation of Rs 72.50 per share. Rs 108 is what you have paid for acquiring the additional 7.9 percent and you have come to 26 percent by way of which you have 26 percent-26 percent equal voting rights in the company, even though 45 percent is held by Vodafone.

So, my question is at Rs 108 per share, the implied enterprise valuation of the company comes to about USD 27 billion and its pre-synergy earnings before interest, taxes, depreciation and amortisation (EBITDA) of the company together is UISD 3.6 billion. So at USD 27 billion, you have a 7.5x or multiple of EBITDA at which you have done this kind of a valuation. While on the other hand, the debt remains at USD 16 billion which is 4.4 times of EBITDA which you have stated will come down by synergies as well as asset sale. Now, give us a sense of why these rich valuations when we also compare it with other competitors in the telecom sector.

Birla: I do not have the nitty-gritty right off the top of my head. I do not know, Vittorio, if you do, but this is too much of detail for us to talk about right as of now. One fact that I would like to correct, the EBITDA, the valuation, the multiple on EBITDA is about 6.3-6.4, not the number that you mentioned. You talked about 7 plus. So, there is a slight correction there.

Both the valuations, there has been a joint valuation done by independent valuers who are reputed firms. We have an independent fairness opinion again, by a very reputed investment banking outfit. I believe that Rs 108, which is the price at which we are committed to buy from Vodafone to take our stake to 26 percent is the price at which the script closed on Friday. So, it reflects the current market position.

I believe Rs 72 is the price just before the information based on the leak that had happened which I am told, you cannot take me up on this later because it is nitty-gritty, but I am told that that is what the valuers have taken, we assume as being the real value because there has been a run-up post the lead and therefore, the price in some way is artificial. But, more importantly, the valuation puts the relative merger at 50-50 which means they have valued both the companies equally and that is the basis going forward.

Q: But why such a mark-up from Rs 72.50 where the implied valuation has happened to Rs 108. Are you minority shareholders, they are diluted at a price of Rs 72.50 per share?

Birla: Actually, as promoters, we are always very concerned about our minority shareholders and the fact that their interests need to be protected. Like I said, this is an artificial price. The run-up in the last few weeks is on account of information leak consequent to which we had to put out a communication. But we, as promoters felt that to err on the side of caution, we wanted to buy at the latest, the current market price as of Friday closing. We did not really need to, this is always an art more than a science, but we felt that that is something we wanted to do.

Q: Looking for then, synergy is USD 2.1 billion per year. Take us through how confident you are in terms of synergies gaining that component of spectrum that is coming out from this number. And also, your plans for the tower asset sale which is also going to be playing an important part in your overall valuation dynamics.

Colao: We are very confident about the synergies and we are very confident for two reasons. First, the large majority of the synergies come, of course, from the towers and if you think about two companies that are going together and as I said, typically, Idea is stronger where Vodafone is weaker and Vodafone is stronger where Idea is weaker. We had some circles where we had single digit market share and maybe they have double digit market share and vice-versa.

So by putting together the towers, very easily, you can see the numbers. Total number of towers will be at least 20, but probably more percent less than what it is today and that means less electricity, less transmission, lower leases. This is relative quick and relatively easy to achieve. Plus of course, we have whatever the choice of IT systems and you can reduce some duplication and redundancy. So, we have experience as Vodafone of mergers. As you know, we have done a number of mergers in the recent years and we always systematically have hit the synergies, either earlier or higher than what we set. So, I am confident.

Your question on Indus, we have an interest, now completely aligned to maximise the value of the 11 percent that Idea owned, but also the 42 percent that Vodafone owns and in this, we will work together with a third partner in Indus to find the possible best allocation of that money.

Q: So, Idea's stake really makes for a king-maker in the overall Indus stake because now both combined have a majority in Indus. So, what is the plan there?

Colao: That is not the way to look at it because Indus has an agreement between shareholders to allow everybody to have a fair voice at the table and never any of the three has been dominating the other two. This is a healthy mechanism and we are now more aligned on this side, but we have never been dis-aligned with Airtel. So, I will see this as a joint effort to maximise the value of an extraordinary asset that this country has.

Q: You are going to be the Chairman of the combined, merged entity. How are you going to also form the top-management team? You have Co-CEOs, Co-COOs and a CFO appointed by Vodafone. How will this really work?

Birla: This is a company that is going to be jointly managed and with equal rights. That is the underlying objective or the overlying philosophy of the whole combination and for the new company. I will be the Chairman, that is a privilege for me. The CFO is going to be a nominee of Vodafone. The CEO and the COO, we have said that we will choose the best person for the job. That is only fair that any such appointment is merit based.

Birla: We will be talking about a CEO and a COO and I think, across the organisation for the all the key management personnel, what we have clearly agreed after some discussion is that it has to be merit that has to take precedence. And it has to be the best man or woman for the job.

Q: As far as your shedding the spectrum is concerned, have you had pre-consultations with the regulators on whether you are going to get any money out of it and also, the regulatory approvals because this is a complex deal?

Colao: No, we have not, but keep in mind that let us put things in context the amount of extra spectrum that we have is few tens of megahertz out of 1,800. So, it is really relatively tiny. Of course, we are trying to sell it and there might be other operators who here and there need it in which case we would be very happy to take some money, otherwise, we will just hand it over. But it is not a big thing. It is a small thing.

Q: Of course, but regulatory approvals because that delays the deal a lot.

Birla: That is an important question. I believe that the merger and acquisition (M&A) guidelines set up by the Department of Telecommunications are very clear about M&A. I believe that that would go a long way in facilitating this process from moving smoothly.

Q: And the brand name? Idea? Vodafone? What will it be? What will be the name of the merged entity?

Colao: Both, Vodafone and Idea are amazing brands in this country with a loyalty and a lot of affinity created in their customers. We will definitely leverage on both. Now, of course, we will develop professionally an identity in the marketing and the communication strategy. But what we can say today is it is our intention to continue to have the presence of both of them in the market. Whoever is today, working with Vodafone or with Idea should be reassured, they should continue to invest because these two brands together will become a power brand.