Based on the open interest future percentage, as many as 67 stocks including Bank Nifty, Gujarat Gas, REC, Britannia Industries, and Bosch witnessed long unwinding

The market seemed to have given a false upside breakout on July 5 as the Nifty50 surpassed 15,900 in the opening and then 16,000 as well but failed to hold on to both levels due to profit booking in the latter part of the session, registering a bearish candle on the daily charts as the closing was lower than opening levels.

The BSE Sensex fell 100 points to 53,134, and the Nifty50 declined 25 points to 15,811, while the broader space reported a flat closing with negative bias amid mixed market breadth.

"A reasonable negative candle was formed on the daily chart with a long upper shadow. Technically, this pattern signals a false upside breakout of the strong resistance as well as the upper range at 15,950 levels (high low range of 15,700-15,900 levels)," Nagaraj Shetti, Technical Research Analyst at HDFC Securities said.

Hence, he feels the short-term trend of the Nifty seems to have reversed down from the highs and the current chart pattern indicates the possibility of further weakness in the short term. "One may expect Nifty to slide down to 15,600-15,500 levels again in the near term."

Maximum Call open interest of 23.68 lakh contracts was seen at 16,500 strike, which will act as a crucial resistance level in the July series.

Maximum Put open interest of 34.11 lakh contracts was seen at 15,000 strike, which will act as a crucial support level in the July series.

A high delivery percentage suggests that investors are showing interest in these stocks. The highest delivery was seen in Ipca Laboratories, Oracle Financial, Infosys, Gujarat State Petronet, and Ambuja Cements, among others. 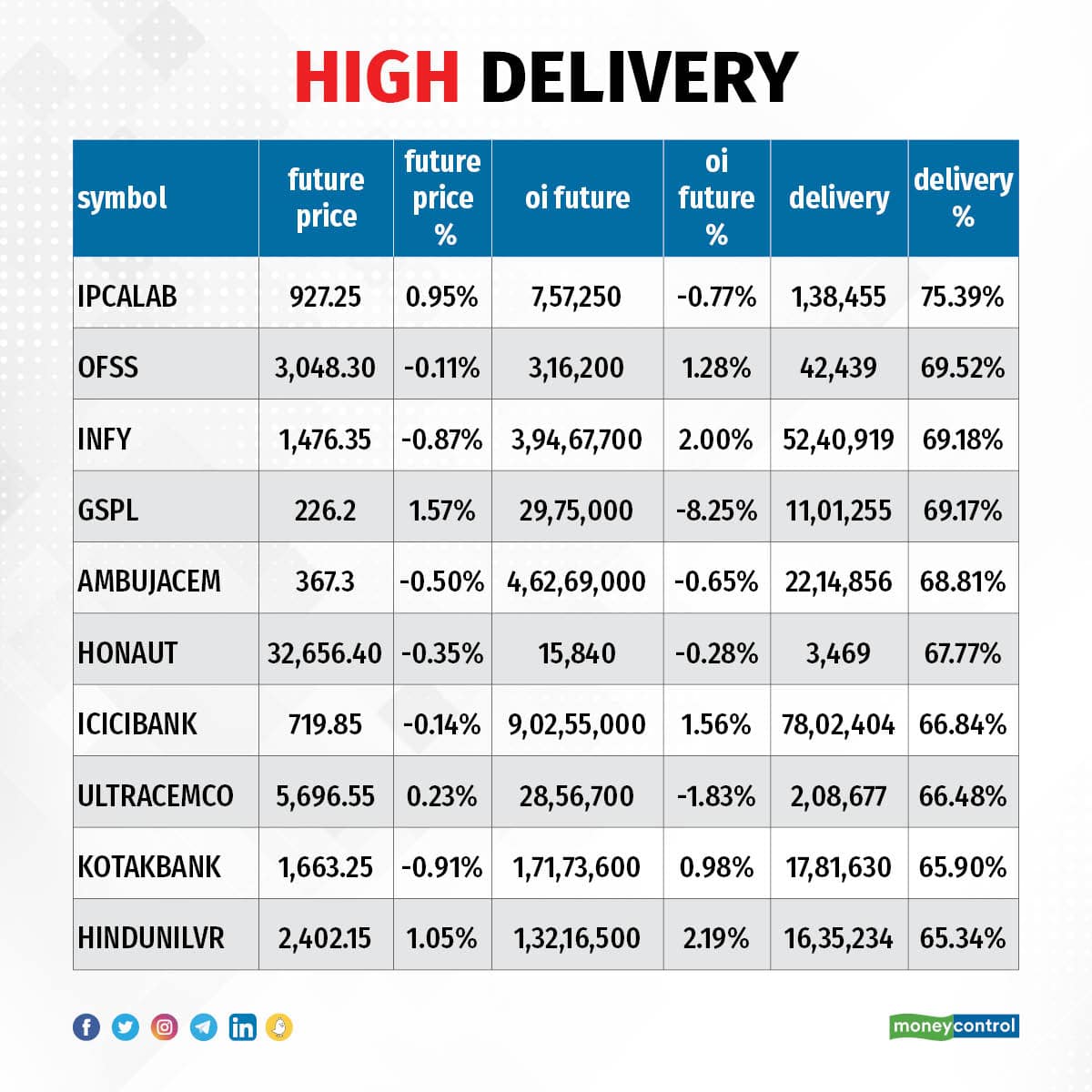 An increase in open interest, along with an increase in price, mostly indicates a build-up of long positions. Based on the open interest future percentage, here are the top 10 stocks including Crompton Greaves Consumer Electricals, ONGC, Shriram Transport Finance, Dr Reddy's Laboratories, and Cipla, in which a long build-up was seen. 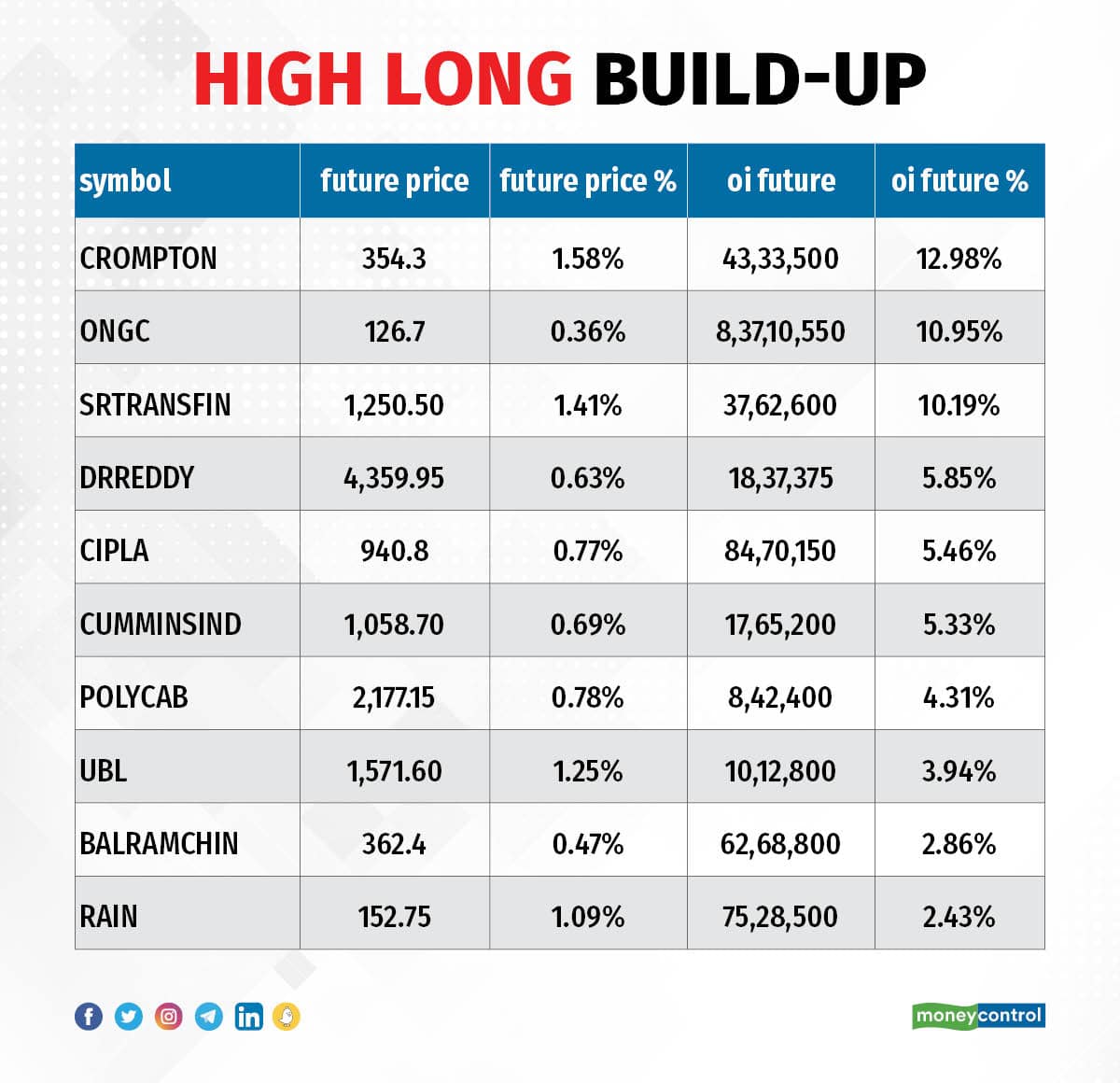 A decline in open interest, along with a decrease in price, mostly indicates a long unwinding. Based on the open interest future percentage, here are the top 10 stocks including Bank Nifty, Gujarat Gas, REC, Britannia Industries, and Bosch, in which long unwinding was seen. 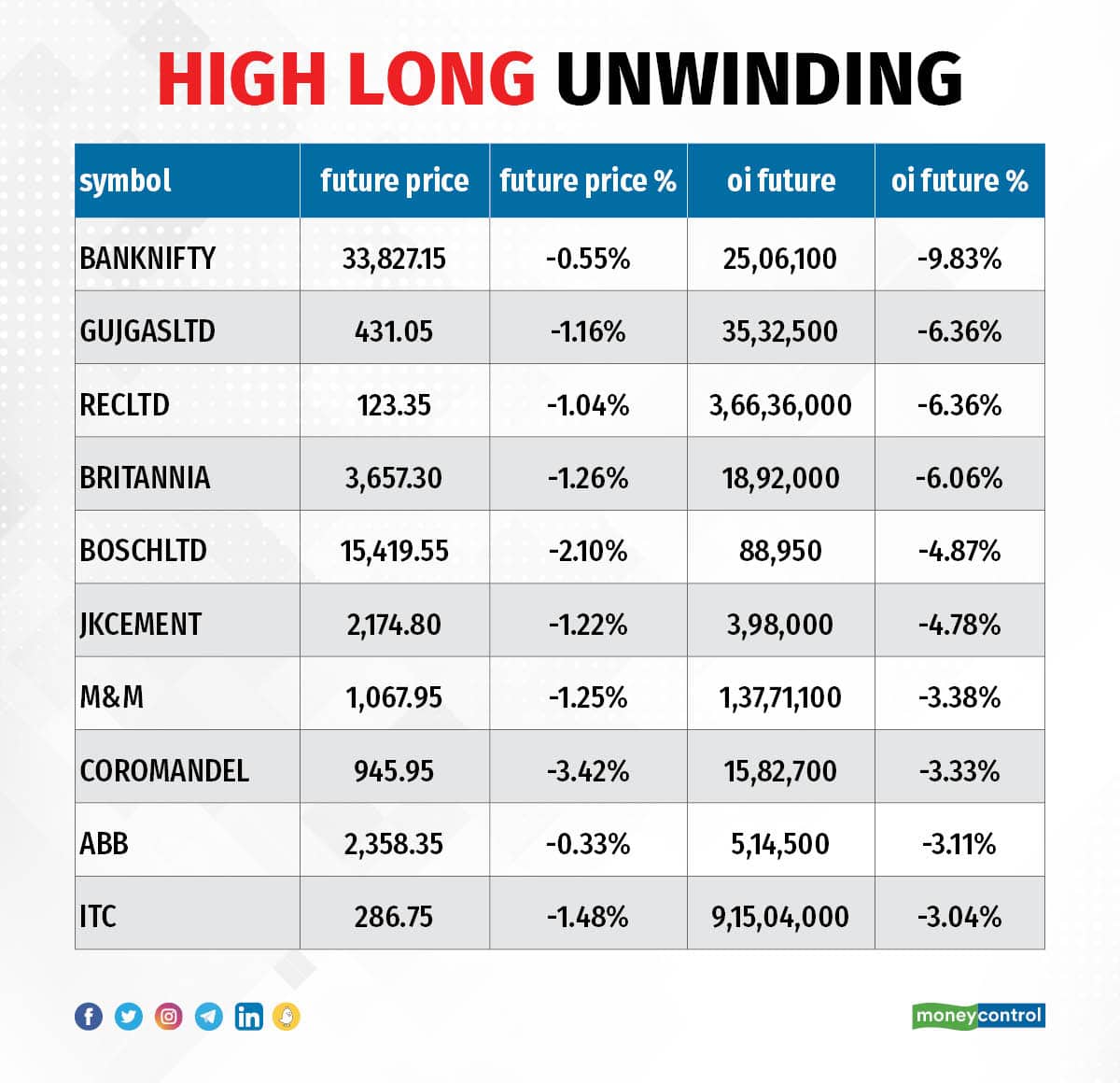 An increase in open interest, along with a decrease in price, mostly indicates a build-up of short positions. Based on the open interest future percentage, here are the 10 stocks including Nifty Financial, SRF, Syngene International, Aarti Industries, and Voltas, in which a short build-up was seen. A decrease in open interest, along with an increase in price, mostly indicates a short-covering. Based on the open interest future percentage, here are the top 10 stocks including SBI Card, Coforge, Chambal Fertilizers, Gujarat State Petronet, and City Union Bank, in which short-covering was seen. 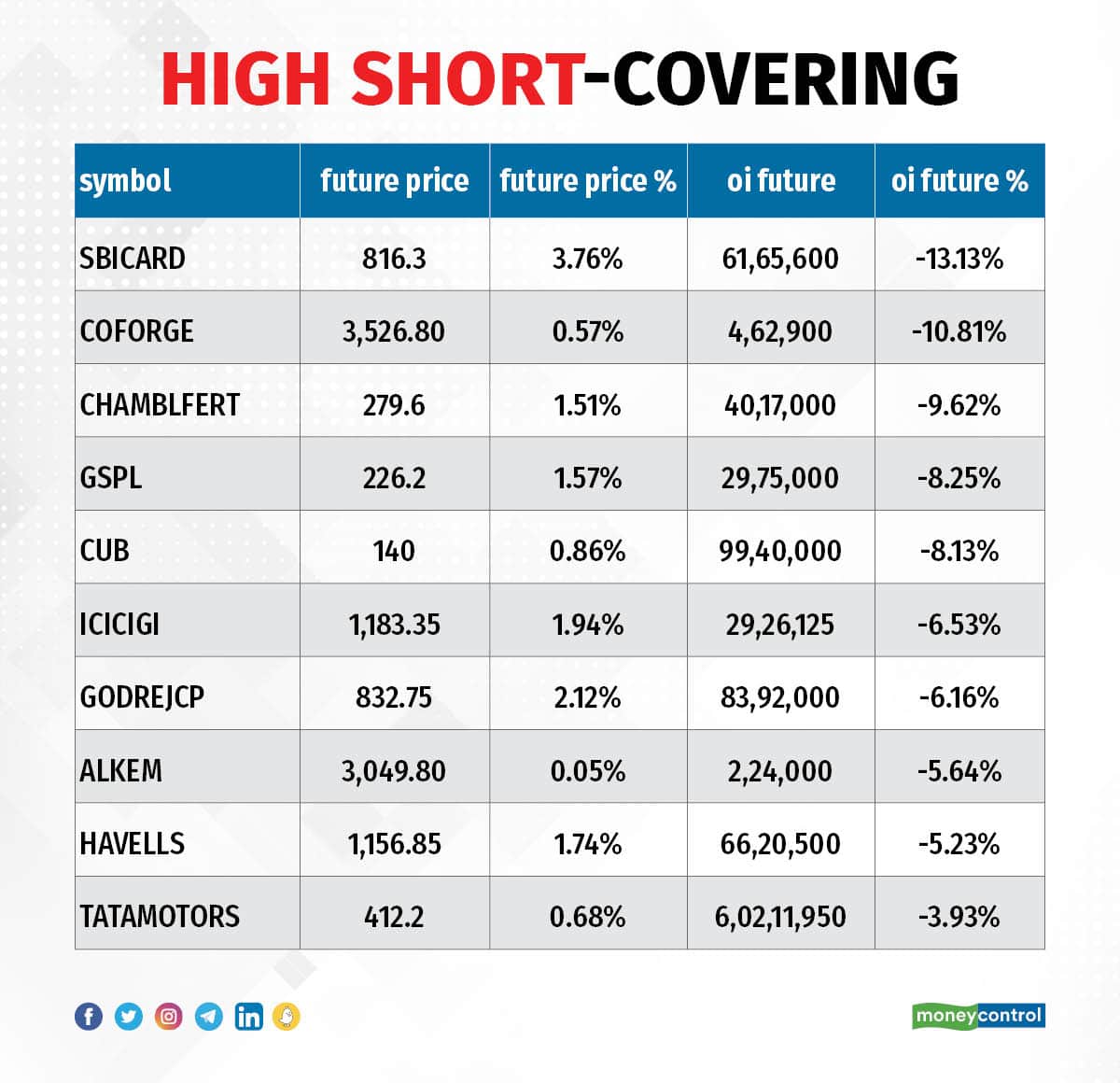 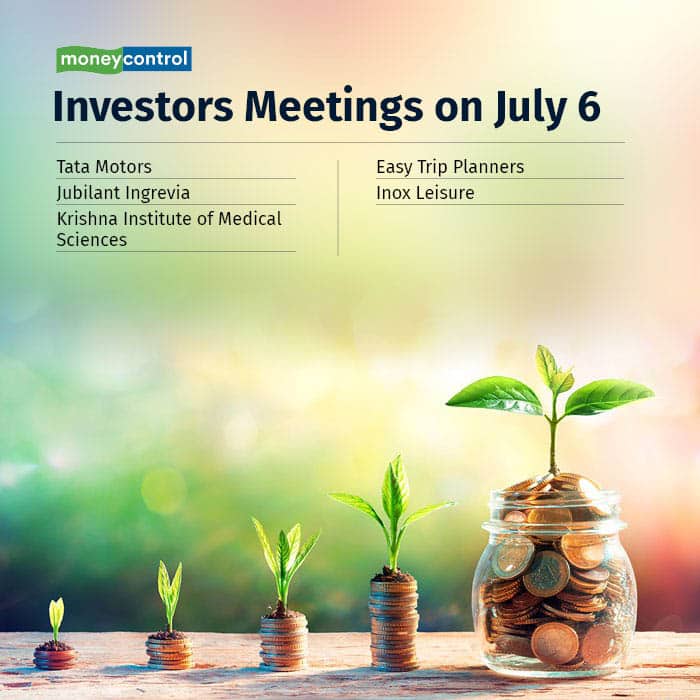 Tata Motors: Officials of the company will interact with ICICI Prudential Asset Management.

Krishna Institute of Medical Sciences: Officials of the company will interact with various investors in Singapore.

Easy Trip Planners: Officials of the company will interact with institutional investors.

Tejas Networks: The company has acquired 60,81,946 equity shares or 62.65% stake in Saankhya at a price of Rs 454.19 per equity share. The transaction cost is Rs 276.24 crore. After the said acquisition, Saankhya has become a subsidiary of the company.

Satia Industries: The company has received an order worth over Rs 105 crore from National Council of Educational Research and Training (NCERT). The company will supply 11,000 tons of Maplitho paper of 80 GSM in sheets and reels for printing of text books.

Equitas Holdings: The company has completed the sale of its entire shareholding in its subsidiary, Equitas Technologies (ETPL). With this, the company complied with the condition stated by RBI as part of its no objection letter for amalgamation of Equitas Holdings with Equitas Small Finance Bank.. Consequently, ETPL has ceased to be the subsidiary of the company.

J Kumar Infraprojects: The company has received Letter of Acceptance from Brihanmumbai Municipal Corporation, for design, build and commissioning of priority sewer tunnel-Phase I from Don Bosco to New Malad IPS with segment lining method in Mumbai. The project cost is Rs 571.01 crore. J Kumar lnfraprojects in joint venture with Michigan Engineers bagged this project with 60:40 proportion.

The National Stock Exchange has not added any stock under its F&O ban list for July 6 as well. Securities in the ban period under the F&O segment include companies in which the security has crossed 95 percent of the market-wide position limit.

Disclaimer: The views and investment tips expressed by investment experts on Moneycontrol.com are their own and not those of the website or its management. Moneycontrol.com advises users to check with certified experts before taking any investment decisions.
Sunil Shankar Matkar
Tags: #Market Cues #Market Edge #Nifty #Sensex #Trade Setup #video
first published: Jul 5, 2022 10:01 pm