Based on the open interest future percentage, short-covering was seen in 30 stocks including HPCL, Petronet LNG, Laurus Labs, Tata Power Company, and Whirlpool of India.

The recovery in late trade helped the market curtail significant losses on May 2. Buying in HDFC after quarterly earnings and HDFC Bank supported the market, while technology and auto stocks were under pressure.

The BSE Sensex declined 85 points to 56,976, while the Nifty50 fell 33 points to 17,069 and formed a bullish candle on the daily charts. The index strongly defended 16,900 levels, which is expected to act as a support for the market going forward, experts said.

"The Nifty is currently placed at the valuation support and also 200 days' EMA (exponential moving average) around 16,900 levels. Previously, reasonable buying has emerged from this support and the market has witnessed minor upside bounce for 1-2 sessions. Hence, there is a possibility of another round of small upside bounce in the short term," Nagaraj Shetti, Technical Research Analyst at HDFC Securities said.

But, "the long term charts remain weak and the repeated testing of lower support and lack of strength to sustain the bounce could eventually result in a decisive downside breakout of the 17,000-16,800 levels in the near term," he added.

The broader markets were also under pressure with the Nifty Midcap 100 index falling 0.6 percent and Smallcap 100 index declining 1.3 percent.

The market was shut on May 3 on account of Eid al-Fitr.

The buying in HDFC Bank and IndusInd Bank supported the banking index as Bank Nifty gained 76 points to close at 36,164 on Monday. The important pivot level, which will act as crucial support for the index, is placed at 35,776, followed by 35,389. On the upside, key resistance levels are placed at 36,393 and 36,623 levels.

Maximum Call open interest of 21.45 lakh contracts was seen at 18,000 strike, which will act as a crucial resistance level in the May series.

Maximum Put open interest of 38.32 lakh contracts was seen at 16,000 strike, which will act as a crucial support level in the May series.

A high delivery percentage suggests that investors are showing interest in these stocks. The highest delivery was seen in Escorts, Infosys, Crompton Greaves Consumer Electricals, Page Industries, and Siemens, among others. An increase in open interest, along with an increase in price, mostly indicates a build-up of long positions. Based on the open interest future percentage, here are the top 10 stocks including Tata Chemicals, MCX India, Can Fin Homes, Alkem Laboratories, and GNFC, in which a long build-up was seen. A decline in open interest, along with a decrease in price, mostly indicates a long unwinding. Based on the open interest future percentage, here are the top 10 stocks including Astral, Ashok Leyland, Havells India, Hero MotoCorp, and Persistent Systems, in which long unwinding was seen. An increase in open interest, along with a decrease in price, mostly indicates a build-up of short positions. Based on the open interest future percentage, here are the top 10 stocks including Dixon Technologies, Escorts, Aarti Industries, Metropolis Healthcare, and Bajaj Auto, in which a short build-up was seen. 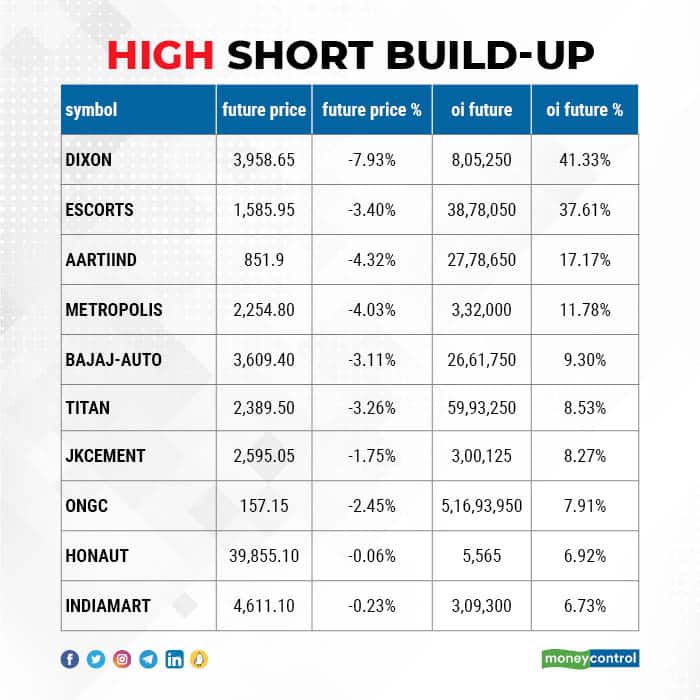 A decrease in open interest, along with an increase in price, mostly indicates a short-covering. Based on the open interest future percentage, here are the top 10 stocks including HPCL, Petronet LNG, Laurus Labs, Tata Power Company, and Whirlpool of India, in which short-covering was seen. 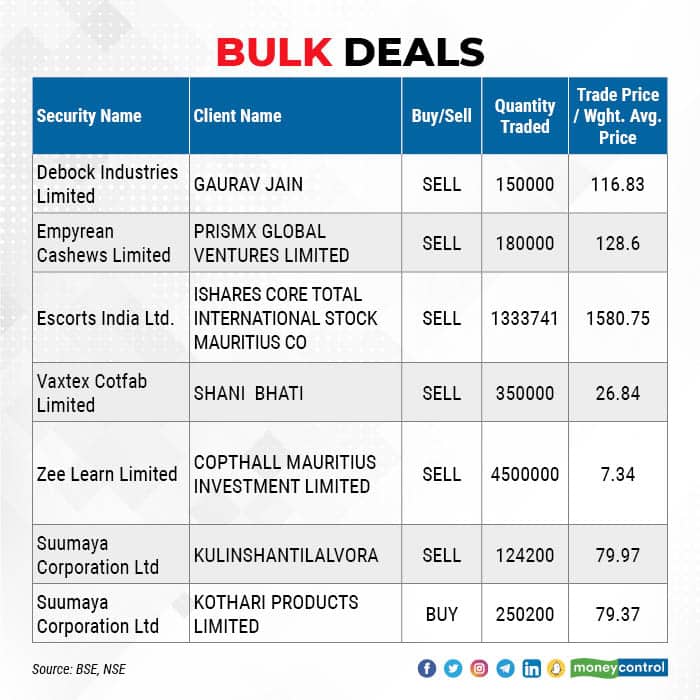 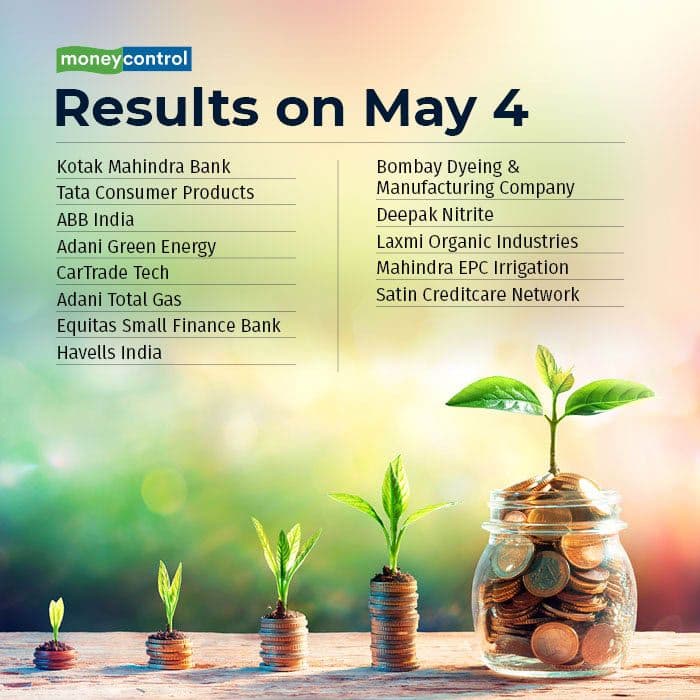 RailTel Corporation of India: The state-owned telecom infrastructure provider has received a work order from Madhya Pradesh State Electronics Development Corporation. The company will act as a system integrator for the expansion of SDC and the establishment of a disaster recovery centre. The work order is worth Rs 97.64 crore.

Voltas: The home appliances company has executed the joint venture agreement with Hong Kong-based Highly International, a wholly owned subsidiary of Shanghai Highly (Group) Company. The company will do a design, manufacturing, sale and service of inverter compressors for room air-conditioners, motors for inverter compressors, and their associated parts.

Britannia Industries: The Wadia group food company registered a 5 percent year-on-year growth in consolidated profit at Rs 378 crore for the quarter ended March 2022. Revenue from operations rose 13.4 percent to Rs 3,550.5 crore and EBITDA increased by 8.8 percent to Rs 550 crore compared to the corresponding period last fiscal. It delivered a mid-single-digit volume growth during the quarter.

Jindal Stainless: The company clocked a 156 percent year-on-year growth in Q4FY22 profit at Rs 750 crore with EBITDA rising 55 percent to Rs 842 crore and revenue climbing 68 percent to Rs 6,564 crore compared to the year-ago period. The domestic business contributed 68 percent to sales volumes, and exports' contribution stood at 32 percent in March 2022 quarter doubled from 16 percent in the same period last year.

JSW Energy: The power generation company recorded a massive 8 times year-on-year growth in consolidated profit at Rs 864.3 crore in Q4FY22, with EBITDA climbing 79 percent YoY to Rs 1,131.8 crore led by a one-time reversal of provision due to tariff true-up order of the Karcham Wangtoo plant. Revenue during the quarter increased by 55.5 percent to Rs 2,440.7 crore compared to the corresponding period last fiscal, with generation higher by 15 percent on higher long term sales.

Adani Wilmar: The packaged food FMCG company has acquired the Kohinoor brand from McCormick Switzerland GMBH for an undisclosed amount. The acquisition would give Adani Wilmar exclusive rights over the brand 'Kohinoor’ basmati rice along with ‘Ready to Cook’, ‘Ready to Eat’ curries and meals portfolio in India. Also, it will strengthen the company's position in the basmati rice business.

Titan Company: The jewellery-to-watch major clocked a 7.2 percent year-on-year decline in standalone profit at Rs 491 crore in the quarter ended March 2022 with revenue rising 2 percent to Rs 7,276 crore during the same period amid partial lockdowns, volatility in gold prices and uncertainty in a fragile geopolitical situation. At the operating level, EBITDA dropped 1.6 percent to Rs 782 crore and margin fell by 40 bps to 10.7 percent compared to the year-ago period.

As we are at the beginning of the May series, the NSE has not put any stock under the F&O ban for May 4. Securities in the ban period under the F&O segment include companies in which the security has crossed 95 percent of the market-wide position limit.

Disclaimer: The views and investment tips expressed by investment experts on Moneycontrol.com are their own and not those of the website or its management. Moneycontrol.com advises users to check with certified experts before taking any investment decisions.
Sunil Shankar Matkar
Tags: #Market Cues #Market Edge #Nifty #Sensex #Trade Setup #video
first published: May 3, 2022 09:12 pm