Rajesh Palviya of Axis Securities expects the index to consolidate within a broad range from 17,600 to 16,800 levels in the coming sessions with mixed bias and high volatility.

The bulls were back in action. The market snapped a two-day losing streak, with the benchmark indices rising 1.56 percent on the back of support from all sectors on December 7, ahead of RBI monetary policy and after easing of Omicron concerns.

"The daily price action has formed a sizable bullish candle forming higher high-low compared to the previous session indicating positive bias. This buying was observed from the past 3-4 sessions with multiple support zones of 16,800-16,900 levels, which remains a crucial support zone in the near term," says Rajesh Palviya, VP - Technical and Derivative Research at Axis Securities.

Rajesh Palviya expects the index to consolidate within a broad range from 17,600 to 16,800 levels in the coming sessions with mixed bias, along with high volatility.

The broader markets also joined the bulls' party as the Nifty Midcap 100 and Smallcap 100 indices climbed over 1 percent each. 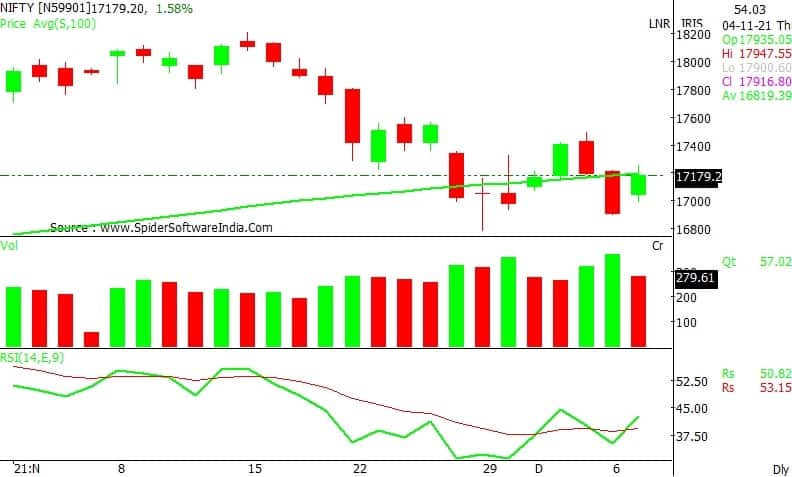 Maximum Call open interest of 34.40 lakh contracts was seen at 18000 strike, which will act as a crucial resistance level in the December series.

Maximum Put open interest of 49.36 lakh contracts was seen at 17000 strike, which will act as a crucial support level in the December series.

Xelpmoc Design and Tech: The company's officials will meet several investors via virtual conference on December 8.

GMM Pfaudler: The company's officials will interact with analysts and investors on December 8 and 9.

Garment Mantra Lifestyle: The company's officials will meet analysts and investors on December 8.

Can Fin Homes: The company's officials will attend Emerging Ideas Conference 2021 on December 8.

Tube Investments of India: The company's officials will meet IIFL Capital and WhiteOak Capital on December 8.

California Software: The company has signed a Memorandum of Understanding (MoU) to acquire a majority stake in Pratsware Technologies which owns botbaba, which is a WhatsApp Chatbot Platform. This acquisition will make Calsoft a global leadership in the sphere of e-commerce and Point of Sale (PoS) solutions.

NHPC: The company has approved a proposal for monetisation by securitisation through a bidding process of return on equity (RoE) of Chamera-I power station (3 X 180 MW), Himachal Pradesh and further to monetise the RoE of one or more power stations for 05/10/15 years in one go or rollover.

Hindustan Zinc: The company approved an interim dividend of Rs 18 per equity share on a face value of Rs 2 per share for FY22.

Brightcom Group: The company has entered into a definitive agreement to acquire 100 percent of Vuchi Media, operating under the brand name of MediaMint.

One stock - Indiabulls Housing Finance - is under the F&O ban for December 8. Securities in the ban period under the F&O segment include companies in which the security has crossed 95 percent of the market-wide position limit.