Any intra-week dips down to the support of 14,500-14,400 levels could be a buying opportunity, Nagaraj Shetti of HDFC Securities advised.

"A long bull candle was formed, which signal an emergence of strong buying in the market. After showing higher levels weakness at the immediate hurdles for few occasions, Nifty finally showed initial sign of strength today by closing above the hurdle of previous opening downside gap around 14,600 levels (April 19). This is positive indication and signal more upside in the near term," Nagaraj Shetti, Technical Research Analyst at HDFC Securities told Moneycontrol.

He feels the bearish pattern of sell on rise has been negated and a sustainable upside bounce was seen from the lower range of 14,200. This is positive indication and one may expect Nifty to test the upper range of 14,900-15,000 levels in the next one week, he said.

The Nifty Midcap 100 index gained 1.57 per cent and Smallcap 100 index rose 1.74 per cent, outshining the frontliners.

Maximum Call open interest of 52.20 lakh contracts was seen at 15,000 strike, which will act as a crucial resistance level in the April series.

Maximum Put open interest of 59.87 lakh contracts was seen at 14,000 strike, which will act as a crucial support level in the April series. 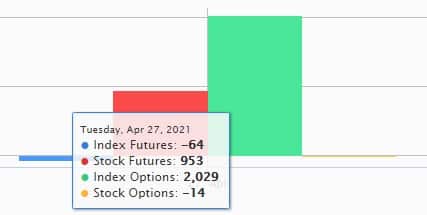 One stock - SAIL - is under the F&O ban for April 28. Securities in the ban period under the F&O segment include companies in which the security has crossed 95 percent of the market-wide position limit.
Sunil Shankar Matkar
Tags: #Market Cues #Market Edge #Nifty #Sensex #Trade Setup #video
first published: Apr 27, 2021 09:40 pm