Based on the open interest future percentage, long unwinding was seen in 95 stocks including ONGC, Birlasoft, Bajaj Finserv, Whirlpool of India and Hindustan Aeronautics.

"A long negative candle was formed on the daily chart at the lows with a long lower shadow. Technically, this pattern reflects an ongoing downtrend in the market and an attempt at a downside breakout of the support of around 16,700 levels. Formation of long lower shadow signals an emergence of minor buying interest from the lows," Nagaraj Shetti, Technical Research Analyst at HDFC Securities said, adding the Nifty is now placed at the edge of crucial support at 15,650-15,700 levels.

The short-term trend of the Nifty continues to be negative, the market expert feels.

Having reached crucial lower support of 15,700 levels and a formation of unfilled weekly opening downside gap, there is a possibility of an upside bounce from the lows of around 15,500-15,400 levels in the next 1-2 sessions, Shetti said.

The selling pressure was also seen in broader space as the Nifty Midcap 100 index declined 2.9 percent and Smallcap 100 index fell 3.9 percent. India VIX, which measures the expected volatility in the market, increased by 14.25 percent to 22.37 levels, which was a discomfort for bulls.

Maximum Call open interest of 25.66 lakh contracts was seen at 17,000 strike, which will act as a crucial resistance level in the June series.

A high delivery percentage suggests that investors are showing interest in these stocks. The highest delivery was seen in United Breweries, TCS, HDFC, ICICI Lombard General Insurance, and Infosys, among others. An increase in open interest, along with an increase in price, mostly indicates a build-up of long positions. Based on the open interest future percentage, here are the four stocks - Honeywell Automation, Siemens, Pidilite Industries, and PI Industries - in which a long build-up was seen. A decline in open interest, along with a decrease in price, mostly indicates a long unwinding. Based on the open interest future percentage, here are the top 10 stocks including ONGC, Birlasoft, Bajaj Finserv, Whirlpool of India, and Hindustan Aeronautics, in which long unwinding was seen. An increase in open interest, along with a decrease in price, mostly indicates a build-up of short positions. Based on the open interest future percentage, here are the top 10 stocks including RBL Bank, Bharat Forge, Bank Nifty, Ramco Cements, and Crompton Greaves Consumer Electricals, in which a short build-up was seen. A decrease in open interest, along with an increase in price, mostly indicates a short-covering. Based on the open interest future percentage, here are the six stocks - Bajaj Auto, Marico, Nestle India, Syngene International, Ipca Laboratories, and Britannia Industries - in which short-covering was seen. 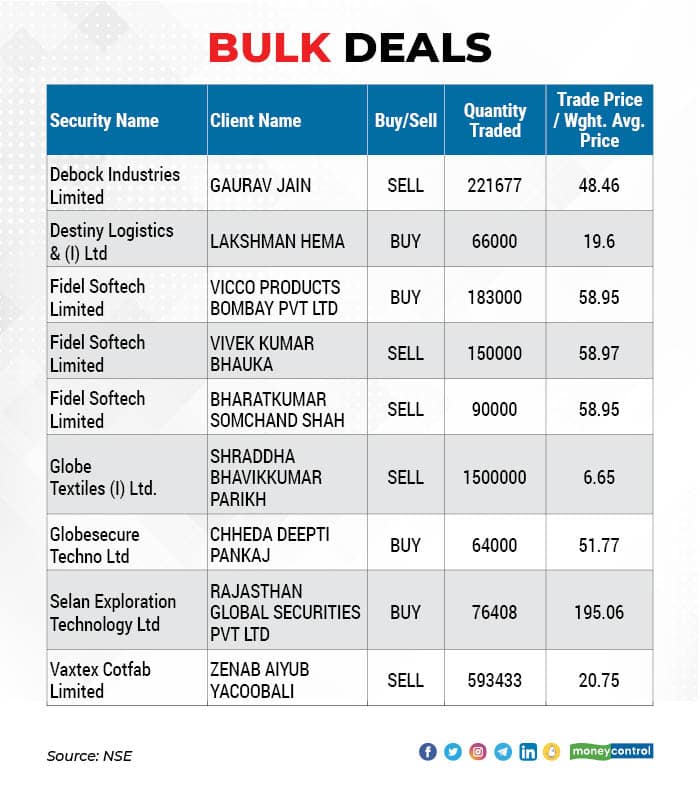 Tata Communications: The company will be holding an Investor Day 2022.

Escorts: Officials of the company will meet various investors through CLSA.

Century Enka: Officials of the company will meet Guardian Capital. Vedanta: Officials of the company will meet BlackRock.

Delta Corp: HDFC Mutual Fund acquired an additional 2.15 percent equity stake in the company via open market transactions on June 10. With this, its shareholding in the company stands increased to 9.21 percent, up from 7.06 percent earlier.

Torrent Power: The company has completed the acquisition of a 50 MW solar power plant from SkyPower Group in Telangana. The enterprise value for this acquisition is Rs 416 crore. The long-term power purchase agreement (PPA) for the project is with Northern Power Distribution Company of Telangana (NPDCTL) for a period of 25 years at a fixed tariff of approximately Rs 5.35 per kWh, with remaining useful life of approximately 20 years.

Capri Global Capital: Life Insurance Corporation of India bought additional 35.41 lakh equity shares in the company via open market transactions. With this, LIC's shareholding in the company stands increased to 7.059 percent, up from 5.043 percent earlier.

Dynamatic Technologies: The company has won the contract to manufacture the escape hatch door for Airbus A220 aircraft. The contract was placed by Stelia Aeronautique Canada Inc., a subsidiary of Airbus Atlantic SAS.

WPIL: The company has received an order from the Government of West Bengal for the execution of a turnkey project comprising commissioning of a clear water reservoir and a ground-level reservoir. The contract is valued at Rs 430.87 crore and the same will be completed over a period of 24 months.

Aether Industries: SBI Mutual Fund acquired additional 3.23 lakh equity shares in the company via open market transactions. With this, its shareholding in the company stands increased to 5.1775 percent, up from 4.9180 percent earlier.

Two stocks - RBL Bank, and Delta Corp - are under the NSE F&O ban for June 14. Securities in the ban period under the F&O segment include companies in which the security has crossed 95 percent of the market-wide position limit.

Disclaimer: The views and investment tips expressed by investment experts on Moneycontrol.com are their own and not those of the website or its management. Moneycontrol.com advises users to check with certified experts before taking any investment decisions.
Sunil Shankar Matkar
Tags: #Market Cues #Market Edge #Nifty #Sensex #Trade Setup #video
first published: Jun 13, 2022 08:36 pm