The market reversed all its gains in the previous week with the Nifty50 losing more than 100 points on April 11, weighed by weak global cues. The fall in technology stocks ahead of TCS earnings, and correction in select banking and financial services and FMCG stocks dragged the market down.

"The index opened with a downward gap and remained lacklustre throughout the session. The daily price action has formed a small bearish candle and remained subdued within the last three sessions of the High-Low (17,850-17,600) range, indicating the absence of strength," Rajesh Palviya, VP - Technical and Derivative Research at Axis Securities said. 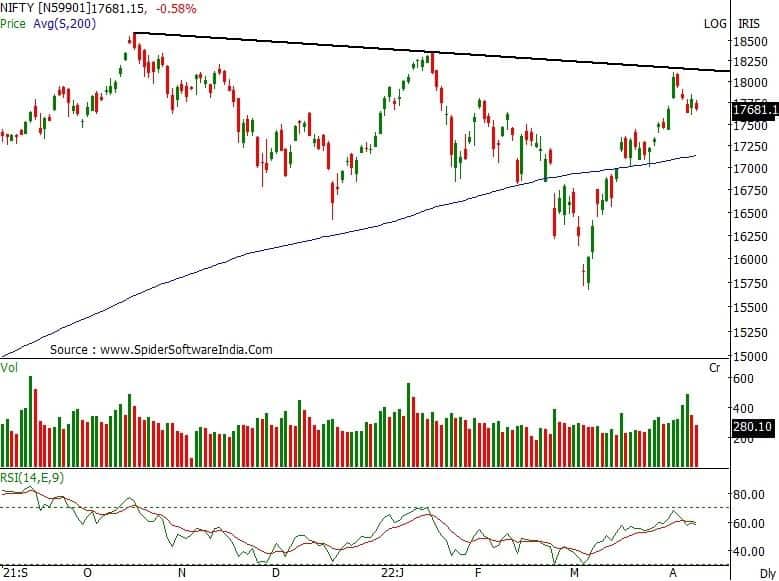 Maximum Call open interest of 24.10 lakh contracts was seen at 18,000 strike, which will act as a crucial resistance level in the April series.

Maximum Put open interest of 29.57 lakh contracts was seen at 17,500 strike, which will act as a crucial support level in the April series.

A high delivery percentage suggests that investors are showing interest in these stocks. The highest delivery was seen in Honeywell Automation, Bharti Airtel, Indus Towers, Petronet LNG, and Ipca Laboratories, among others. An increase in open interest, along with an increase in price, mostly indicates a build-up of long positions. Based on the open interest future percentage, here are the top 10 stocks including ACC, Syngene International, Whirlpool of India, Ambuja Cements, and Chambal Fertilizers, in which a long build-up was seen. A decline in open interest, along with a decrease in price, mostly indicates a long unwinding. Based on the open interest future percentage, here are the top 10 stocks including Nifty Financial, Godrej Consumer Products, Escorts, Container Corporation, and Nifty, in which long unwinding was seen. An increase in open interest, along with a decrease in price, mostly indicates a build-up of short positions. Based on the open interest future percentage, here are the top 10 stocks including Persistent Systems, GNFC, Delta Corp, L&T Technology Services, and Infosys, in which a short build-up was seen. A decrease in open interest, along with an increase in price, mostly indicates a short-covering. Based on the open interest future percentage, here are the top 10 stocks including Torrent Power, RBL Bank, Bharat Electronics, Apollo Hospitals, and Info Edge, in which short-covering was seen. Veranda Learning Solutions: Nomura Singapore sold 9,78,581 equity shares in the company via open market transactions at an average price of Rs 160.97 per share on the BSE. 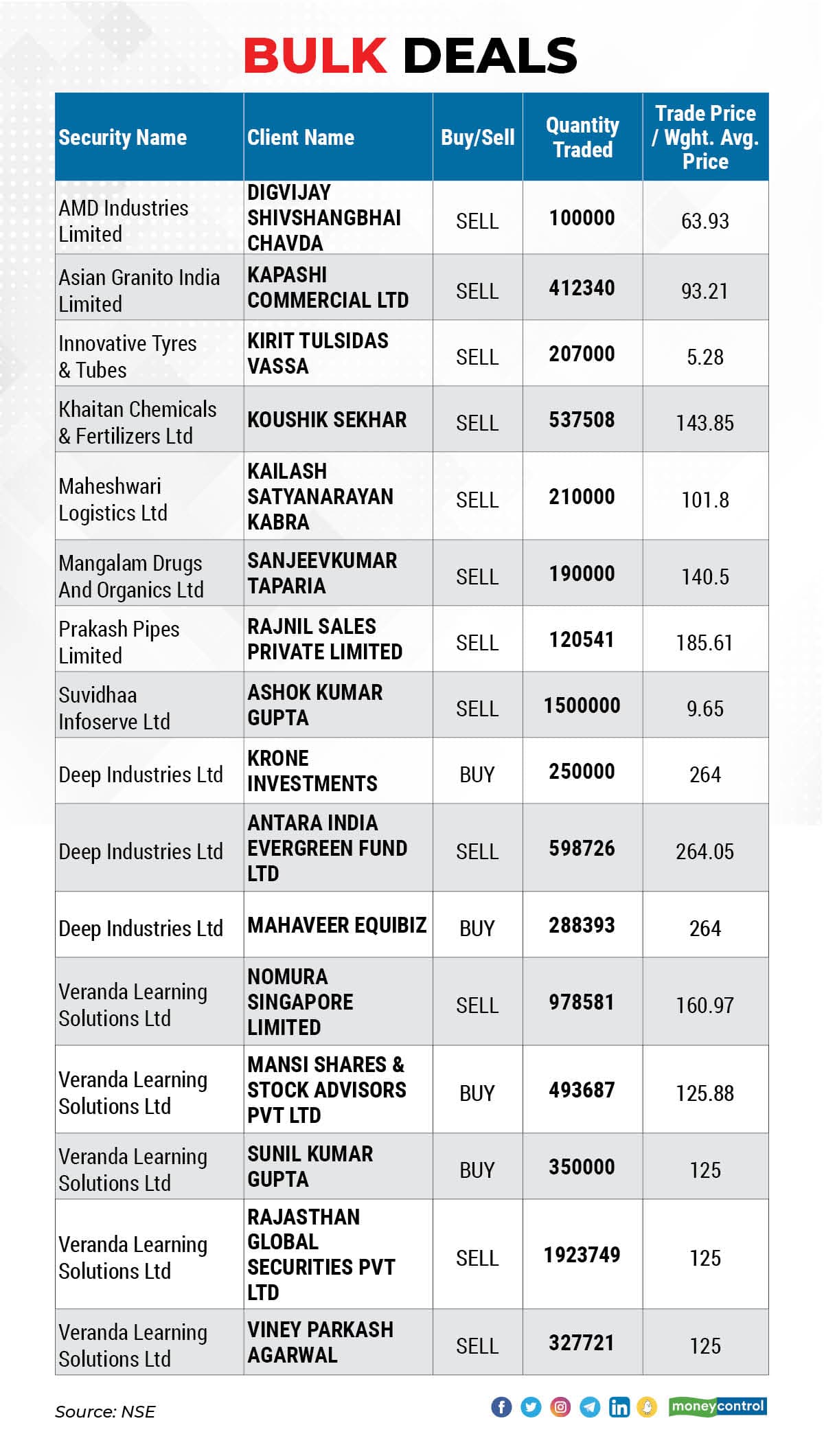 TCS: The IT services provider recorded a profit of Rs 9,926 crore for the quarter ended March 2022, a 7.4 percent growth over a year-ago period, while revenue during the March 2022 quarter increased by 15.8 percent year-on-year to Rs 50,591 crore. Revenue growth in constant currency terms was 14.3 percent YoY. The company recorded the highest ever order book TCV (total contract value) of $11.3 billion in Q4FY22 and the full year order book stood at $34.6 billion.

Kesoram Industries: The company posted a loss of Rs 46.14 crore for the March 2022 quarter, which widened from Rs 31.97 crore loss in the previous quarter. It had recorded a profit of Rs 96.41 crore in the year-ago period. An increase in power, fuel and finance costs impacted the bottom line to a major extent. Revenue increased by 20 percent to Rs 1,031.78 crore compared to the year-ago period and the sequential growth was 18 percent.

UltraTech Cement: The cement major has been declared as a preferred bidder for Diggaon limestone block. The company participated in the e-auction conducted by the Karnataka government. The block is adjacent to the company's Rajashree unit and has total cement grade geological resources of 530 million tonnes of limestone over an area of 7.86 square km.

JSW Steel: JSW Utkal Steel, a subsidiary of JSW Steel, has received the environmental clearance for setting up a greenfield integrated steel plant (ISP) with a capacity of 13.2 million tonnes per annum (MTPA) crude steel, from the government. The capital expenditure for the said steel plant project is expected to be Rs 65,000 crore.

Gufic Biosciences: The company has received permission from the Central Drugs Standard Control Organisation (CDSCO), Ministry of Health and Family Welfare to manufacture Isavuconazonium Sulfate API and finished formulation Isavuconazole for injection 200 mg/vial. Isavuconazole is indicated for the treatment of invasive aspergillosis and invasive mucormycosis.

Delta Corp: The gaming and hospitality company has reported a lower profit at Rs 48.11 crore for the quarter ended March 2022, compared to profit of Rs 57.77 crore in the year-ago period, while revenue for the quarter has seen a moderate growth at Rs 218.32 crore, up from Rs 211.34 crore YoY. The company also approved amalgamation of Daman Entertainment, and Daman Hospitality with itself.

Two stocks - Delta Corp and RBL Bank - are under the F&O ban for April 12. Securities in the ban period under the F&O segment include companies in which the security has crossed 95 percent of the market-wide position limit.

Disclaimer: The views and investment tips expressed by investment experts on Moneycontrol.com are their own and not those of the website or its management. Moneycontrol.com advises users to check with certified experts before taking any investment decisions.
Sunil Shankar Matkar
Tags: #Market Cues #Market Edge #Nifty #Sensex #Trade Setup #video
first published: Apr 11, 2022 09:59 pm