"As long as the prices do not breach the 16,800 or the 17,300-mark, one can expect the prices to remain in a range and move between the above mentioned levels," says Karan Pai of GEPL Capital.

The market recouped previous day's losses on December 27 as the Nifty50 hit 17,100-mark intraday before closing with half a percent gains . The broader markets also gained some strength with the Nifty Midcap 100 and Smallcap 100 indices rising 0.44 percent and 0.2 percent, respectively.

The BSE Sensex jumped 296 points to 57,420, while the Nifty50 recovered 253 points from day's low and settled with 82.50 points gains at 17,086, forming bullish candle on the daily charts. Earlier, the benchmark indices had seen a gap down opening.

"Looking at price action we believe that the index is witnessing some buying pressure near the 16,800 mark, thereby indicating that this level might act as demand zone in the sessions to come," says Karan Pai, Technical Analyst at GEPL Capital. 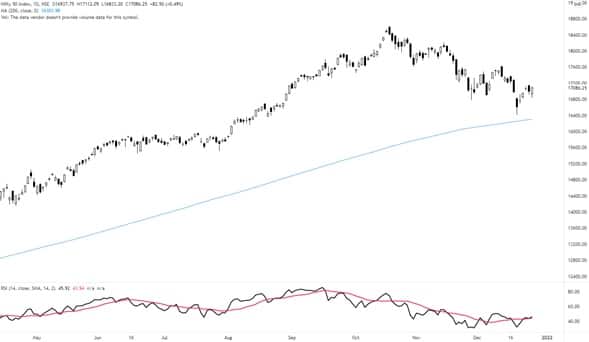 Maximum Call open interest of 80.12 lakh contracts was seen at 18,000 strike, which will act as a crucial resistance level in the December series.

Maximum Put open interest of 92.78 lakh contracts was seen at 17,000 strike, which will act as a crucial support level in the December series.

An increase in open interest, along with a decrease in price, mostly indicates a build-up of short positions. Based on the open interest future percentage, here are the top 10 stocks in which a short build-up was seen. RBL Bank witnessed the maximum short build-up, followed by UBL and IndusInd Bank.

Bliss GVS Pharma: Prarthana Enterprises bought 7,52,570 equity shares in the company at Rs 112.12 per share on the NSE, the bulk deal data showed.

Supriya Lifescience: The company will make its debut on the bourses on December 28. The final issue price is fixed at Rs 274 per share.

Maharashtra Seamless: The company has successfully bagged Rs 150.70 crore orders from PSU companies for supply of ERW and seamless pipes.

GR Infraprojects: The Provisional Completion certificate has been issued by the Independent Engineer for "development of Purvanchal Expressway (Package-VII) from Mojrapur to Bijaura (Ghazipur) in Uttar Pradesh on EPC basis, and has declared the project fit for entry into commercial operation.

Four stocks - Escorts, Indiabulls Housing Finance, Vodafone Idea, and RBL Bank - are under the F&O ban for December 28. Securities in the ban period under the F&O segment include companies in which the security has crossed 95 percent of the market-wide position limit.