Based on the open interest future percentage, there were 56 stocks in which a short build-up was seen including Nifty Financial, Honeywell Automation, Kotak Mahindra Bank, Sun Pharma, and Bank Nifty.

The market reversed some of the previous day's gains due to selling pressure in the second half of the session and closed around half a percent down on March 23, dragged by banks, auto, and select FMCG and IT stocks.

"A long negative candle was formed on the daily chart after opening higher. Technically this indicates a presence of strong resistance around 17,500 levels. However, the pattern of the last four sessions signals formation of alternative candle pattern of positive and negative, which ideally indicates a broader range movement around 17,400-17,000 levels," says Nagaraj Shetti, Technical Research Analyst at HDFC Securities.

According to Shetti, the short term uptrend status of the Nifty remains intact and the positive chart pattern like higher highs and lows is active as per daily timeframe chart.

Further, "weakness from here on could find strong support around 17,100-17,000 levels for the short term. A sustainable upmove above the immediate hurdle of 17,500 levels could pull the Nifty towards the next resistance of 17,650 and 17,800 levels respectively," he says.

Maximum Call open interest of 37 lakh contracts was seen at 18,000 strike, which will act as a crucial resistance level in the March series.

Maximum Put open interest of 50.56 lakh contracts was seen at 16,000 strike, which will act as a crucial support level in the March series.

A high delivery percentage suggests that investors are showing interest in these stocks. The highest delivery was seen in HDFC Bank, Godrej Consumer Products, Coromandel International, Marico, and Power Grid Corporation of India among others on Wednesday. 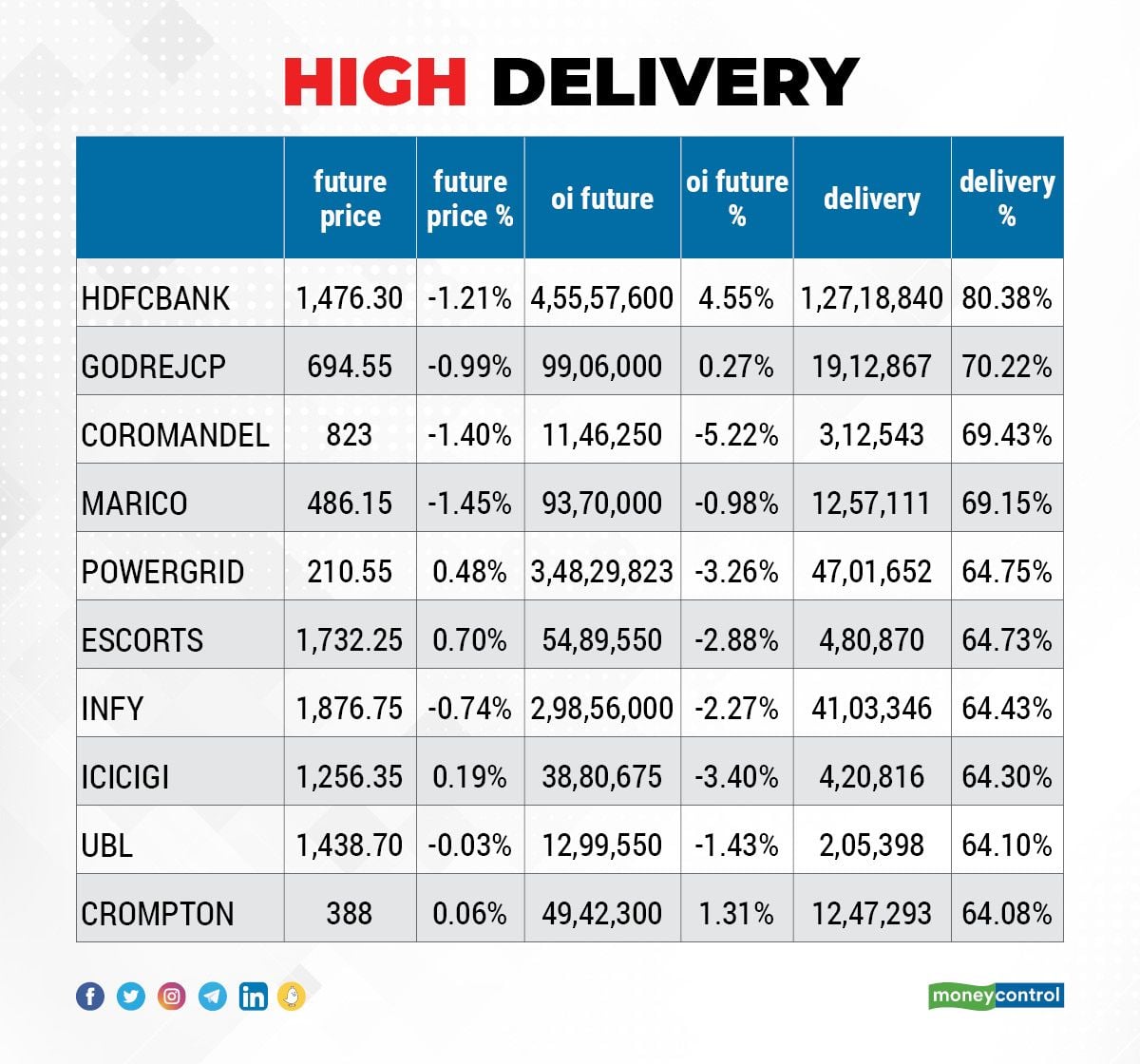 An increase in open interest, along with an increase in price, mostly indicates a build-up of long positions. Based on the open interest future percentage, here are the top 10 stocks in which a long build-up was seen including L&T Finance Holdings, IDFC First Bank, Oberoi Realty, Syngene International, and Nippon Life. A decline in open interest, along with a decrease in price, mostly indicates a long unwinding. Based on the open interest future percentage, here are the top 10 stocks in which long unwinding was seen including GNFC, Pfizer, Coromandel International, Persistent Systems, and Oracle Financial Services Software. An increase in open interest, along with a decrease in price, mostly indicates a build-up of short positions. Based on the open interest future percentage, here are the top 10 stocks in which a short build-up was seen including Nifty Financial, Honeywell Automation, Kotak Mahindra Bank, Sun Pharma, and Bank Nifty. L&T Finance Holdings: Larsen & Toubro acquired 2,12,17,957 equity shares in the company via open market transactions, at an average price of Rs 83.52 per share. 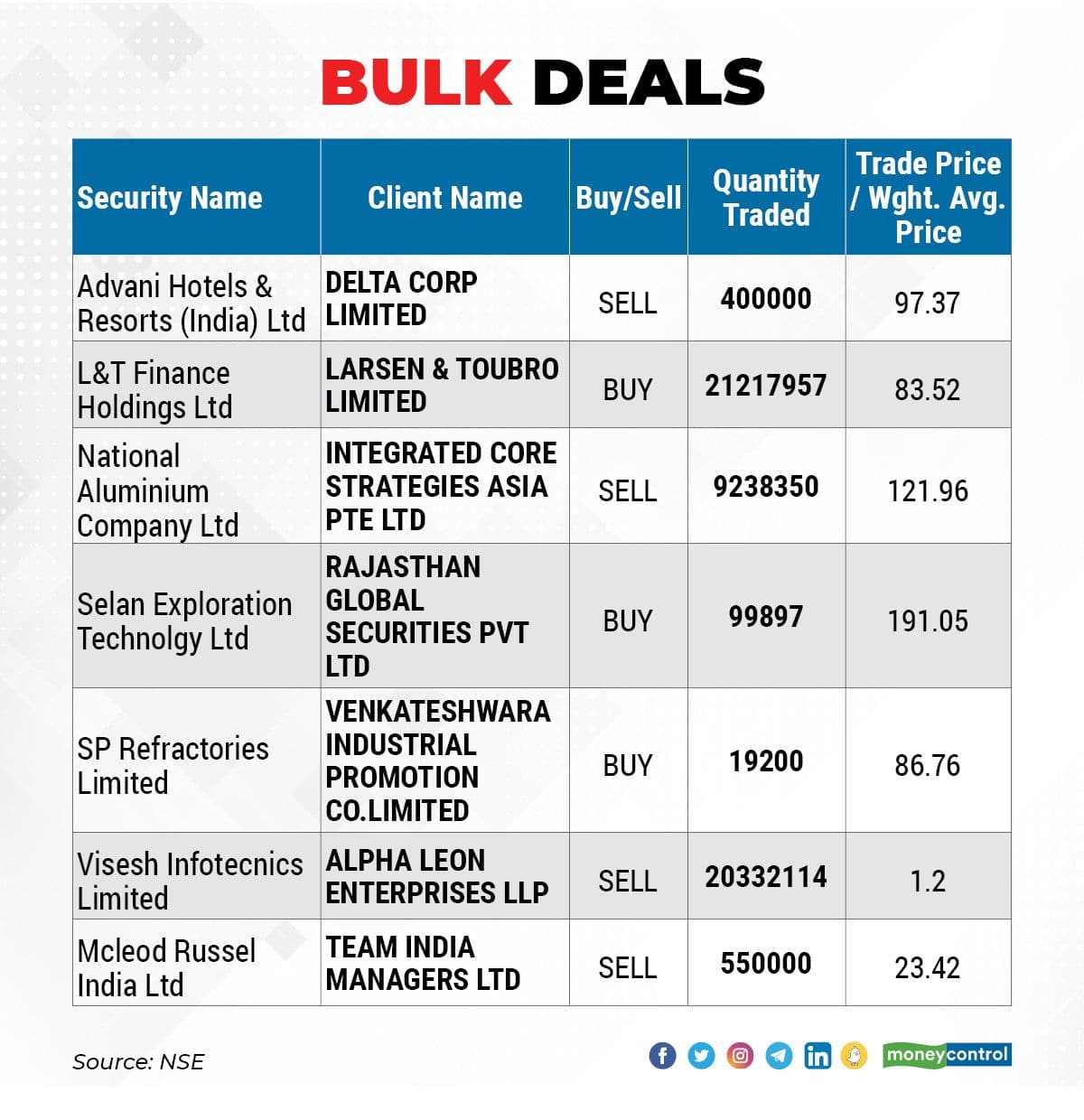 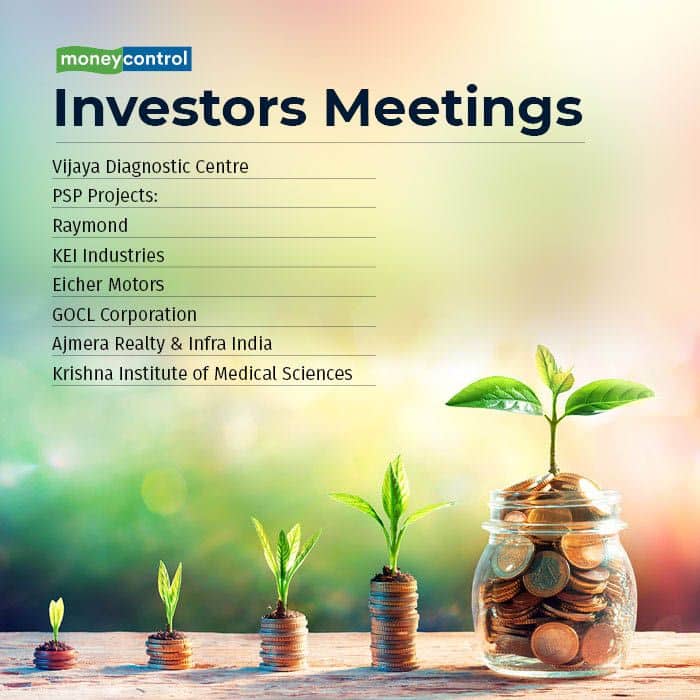 Filatex India: The board on March 29 will consider the proposal for the buyback of fully paid-up equity shares of the company.

GPT Infraprojects: The company has bagged an order valued at Rs 118 crore. This contract is a joint venture of which GPT's share is 51 percent.

Triveni Turbine: Subsidiary Triveni Turbines DMCC has signed an agreement for the acquisition of 70 percent equity shares of TSE Engineering Pty Ltd (TSE). TSE is registered under the laws of South Africa and is engaged in high precision engineering repairs and servicing of machinery in sugar and other industrial plants in the South African Development Community (SADC) region. Six stocks - Balrampur Chini Mills, Delta Corp, GNFC, Indiabulls Housing Finance, SAIL, and Sun TV Network - are under the F&O ban for March 24. Securities in the ban period under the F&O segment include companies in which the security has crossed 95 percent of the market-wide position limit.

Disclaimer: The views and investment tips expressed by investment experts on Moneycontrol.com are their own and not those of the website or its management. Moneycontrol.com advises users to check with certified experts before taking any investment decisions.
Sunil Shankar Matkar
Tags: #Market Cues #Market Edge #Nifty #Sensex #Trade Setup #video
first published: Mar 23, 2022 10:08 pm