As many as 83 stocks saw a long build-up on March 9. They include GSPL, Alembic Pharmaceuticals, JK Cement, Whirlpool, and Balrampur Chini Mills.

The market extended a sharp rally for the second consecutive session and registered more than 2 percent gains on March 9, supported by positive European cues and buying across sectors barring metal.

The BSE Sensex jumped 1,223 points to 54,647, while the Nifty50 rose 332 points to 16,345 and formed a bullish candle on the daily charts after a Bullish Engulfing pattern formation in the previous session.

According to Thakkar, Wednesday's up move was backed by good action seen in the broader markets as well, as they moved in sync with the benchmark. "This up move should be seen as a short-term pullback which has potential to take the index to 16,480 followed by 16,780 mark," he noted.

However, he says the mid-term trend for the index remains weak till the index trades below the 16,850-16,950 zone which is a cluster of 20 and 200-day moving averages as well as the gap resistance. Maximum Call open interest of 21.36 lakh contracts was seen at 17,000 strike, which will act as a crucial resistance level in the March series.

Maximum Put open interest of 37.81 lakh contracts was seen at 16,000 strike, which will act as a crucial support level in the March series.

A high delivery percentage suggests that investors are showing interest in these stocks. The highest delivery was seen in Marico, Pfizer, ABB India, Colgate Palmolive, and Alembic Pharmaceuticals among others on Wednesday. An increase in open interest, along with an increase in price, mostly indicates a build-up of long positions. Based on the open interest future percentage, here are the top 10 stocks in which a long build-up was seen, including GSPL, Alembic Pharmaceuticals, JK Cement, Whirlpool, and Balrampur Chini Mills. 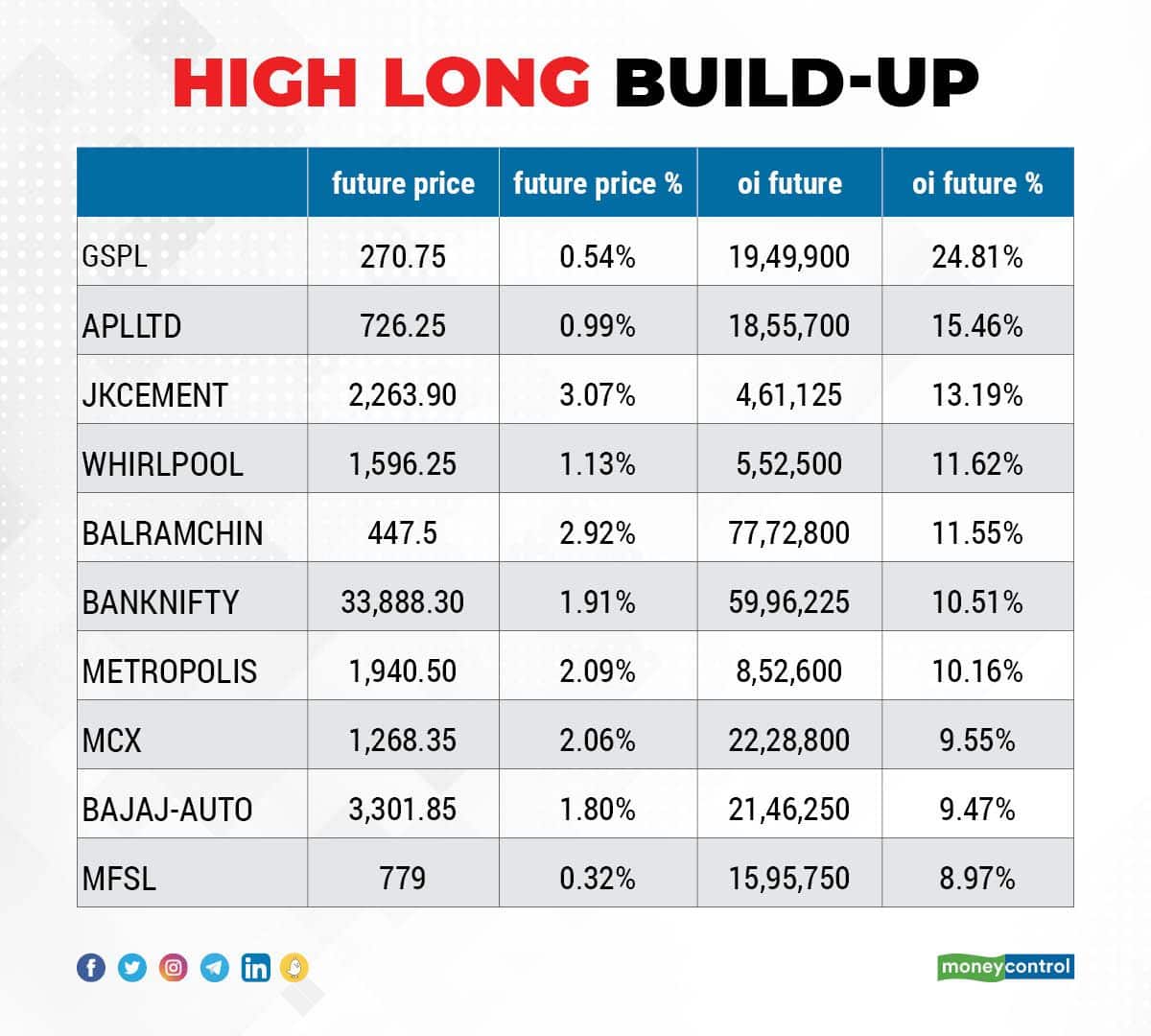 A decline in open interest, along with a decrease in price, mostly indicates a long unwinding. Based on the open interest future percentage, here are the 8 stocks in which long unwinding was seen, including L&T Technology Services, Hindustan Copper, Coromandel International, Mahanagar Gas, and NMDC. An increase in open interest, along with a decrease in price, mostly indicates a build-up of short positions. Based on the open interest future percentage, here are the top 10 stocks in which a short build-up was seen, including Atul, Coforge, GAIL India, Bosch, and HPCL. A decrease in open interest, along with an increase in price, mostly indicates a short-covering. Based on the open interest future percentage, here are the top 10 stocks in which short-covering was seen, including Dalmia Bharat, Polycab India, City Union Bank, Alkem Laboratories, and ABB India. Multi Commodity Exchange of India: Small Cap World Fund Inc sold 3,06,587 equity shares in the company via open market transactions. These shares were sold at an average price of Rs 1,249.37 per share.

Stove Kraft: SCI Growth Investments II has offloaded 7,75,194 equity shares in the company via open market transactions. However, promoter Rajendra Gandhi was the buyer for those shares. These shares were bought and sold at an average price of Rs 645 per share. 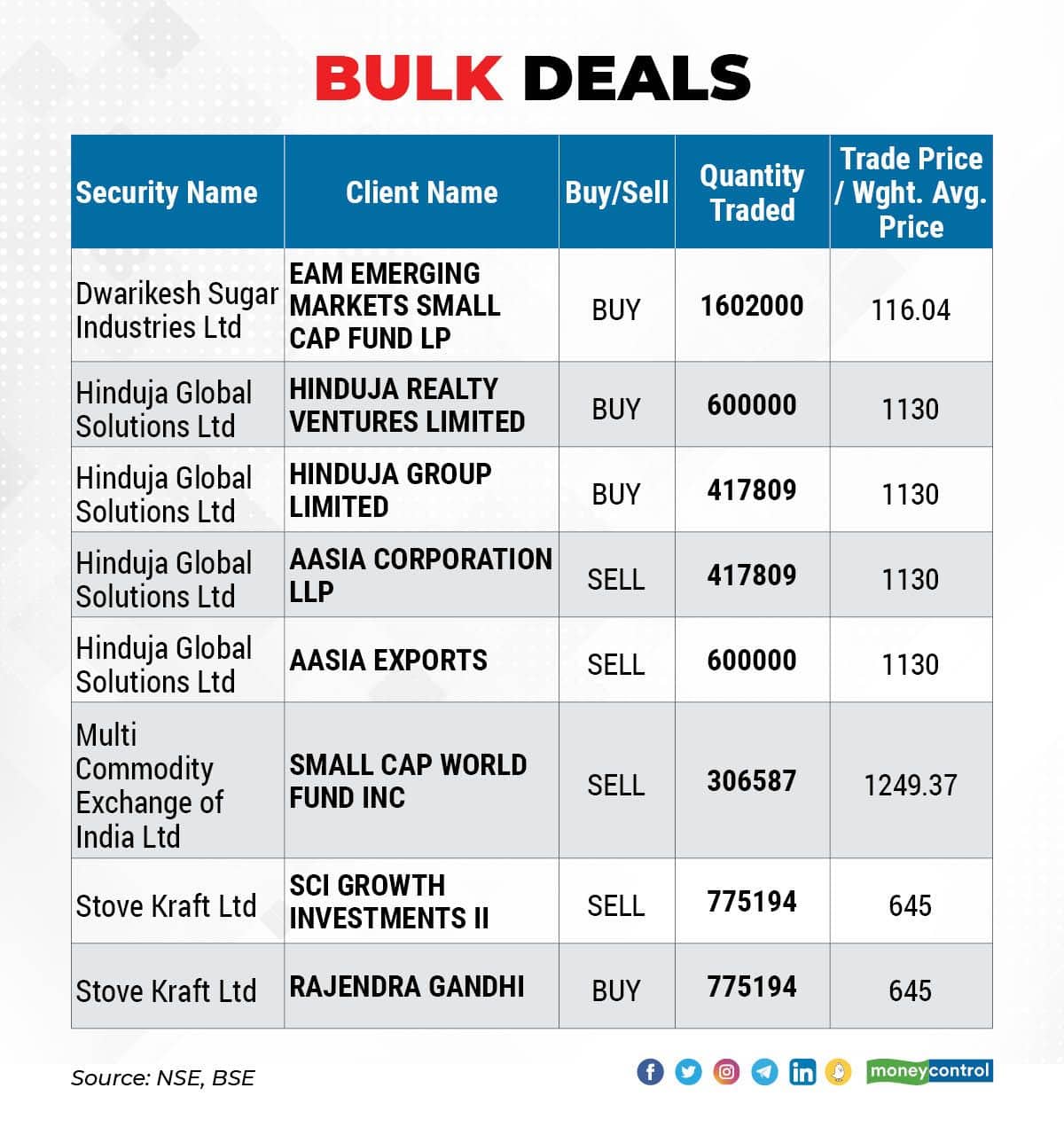 Polycab India: The company's officials will attend the AMSEC connect conference on March 15.

PNB Housing Finance: The housing finance company has approved fundraising of up to Rs 2,500 crore through a rights issue.

NTPC: The state-owned power generation company said 660 MW unit-3 of its subsidiary Nabinagar Power Generating Company has successfully completed trial operation. And consequently the same has been included in the installed capacity of NTPC Group. With this, the total installed capacity of Nabinagar Power Generating Company and NTPC group has become 1,980 MW and 68,567.18 MW, respectively.

Arvind: The company said its operations have fully resumed at the Ankur unit. Operations at the Ankur unit had been disrupted due to disconnection of the effluent discharge connection. As a result, its revenue and EBIDTA have been reduced by approximately Rs 40 crore and Rs 10 crore respectively. The unit had contributed 5 percent of the consolidated revenue and 6 percent of the consolidated EBIDTA of the company for FY21.

Bharti Airtel: The telecom operator has entered into an agreement to acquire a 9 percent equity stake in Avaada CleanTN Project Private Limited, a special purpose vehicle. This SPV is formed for owning and operating the captive power plant.

Not a single stock is under the F&O ban for March 10. Securities in the ban period under the F&O segment include companies in which the security has crossed 95 percent of the market-wide position limit.

Disclaimer: The views and investment tips expressed by investment experts on Moneycontrol.com are their own and not those of the website or its management. Moneycontrol.com advises users to check with certified experts before taking any investment decisions.
Sunil Shankar Matkar
Tags: #Market Cues #Market Edge #Nifty #Sensex #Trade Setup #video
first published: Mar 9, 2022 09:38 pm