Top 15 things you should know before the opening bell today

The daily strength indicator RSI (relative strength index) has witnessed a negative crossover from the overbought zone which signals weakness on short-term charts, he says. 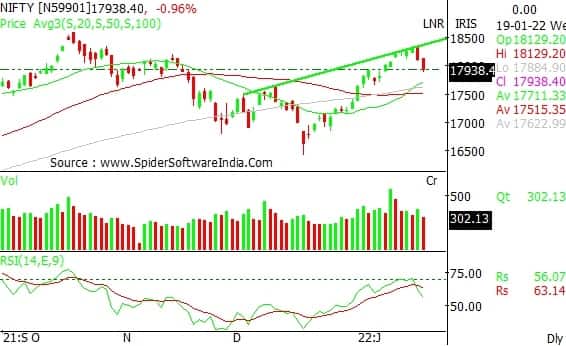 Maximum Call open interest of 31.42 lakh contracts was seen at 18000 strike, which will act as a crucial resistance level in the January series.

Analysts/Investors Meeting; and Results on January 20

Rallis India: The company's officials will meet analysts and investors on January 20.

Sterling and Wilson Renewable Energy: The company's officials will meet investors and analysts on January 20.

Sobha: The company's officials will meet institutional investor/analyst on January 20.

Nandan Denim: ICRA has upgraded the long term rating to BBB/positive from BBB-/stable and short term rating has been upgraded to A3+ from A3. Six stocks - BHEL, Escorts, Granules India, Indiabulls Housing Finance, Vodafone Idea, and SAIL - are under the F&O ban for January 20. Securities in the ban period under the F&O segment include companies in which the security has crossed 95 percent of the market-wide position limit.