The short term trend of Nifty continues to be weak, says Nagaraj Shetti of HDFC Securities. The overall negative chart pattern as per daily and weekly chart shows that the present key support of 17,700 could be broken in the short term, he adds.

The market nosedived further with the BSE Sensex falling way below the 60,000 mark, dragged by selling in all sectors with Auto, IT, Metal and Pharma being the prominent losers on November 18.

The BSE Sensex plunged 433.05 points to close at 59,575.28, while the Nifty50 fell 133.90 points to 17,764.80 and formed a bearish candle on the daily charts, continuing the downtrend for the third consecutive session. The index also saw bearish candle formation on the weekly charts as it was down 1.87 percent during the week.

"A long negative candle was formed on the daily chart with upper and lower shadow. This reflects the extent of decline with high volatility on the day of weekly F&O expiry of Thursday," said Nagaraj Shetti, Technical Research Analyst at HDFC Securities.

"Nifty is now placed at the edge of the support of ascending trend line, which is connected through previous swing lows at 17,750 levels. This is not a good sign and signals chances of downside breakout of the trend line support in the short term," he pointed out.

Shetti feels that the short term trend of Nifty continues to be weak. "The overall negative chart pattern as per daily and weekly chart shows that the present key support of 17,700 could be broken in the short term and that could open a larger downward correction down to 17,200-17,100 levels in the next few weeks. Any attempt of upside bounce from here could find resistance around 17,850-17,900 levels," he noted.

Maximum Call open interest of 57.60 lakh contracts was seen at 18000 strike, which will act as a crucial resistance level in the November series.

Maximum Put open interest of 30.35 lakh contracts was seen at 17500 strike, which will act as a crucial support level in the November series.

Cipla: The company's officials will meet Stewart Investors on November 22, and Aikya Investment Management on November 23.

Symphony: The company's officials will participate in Motilal Oswal Ideation Conference, 2021, on December 3.

IRCTC: The Ministry of Railways has withdrawn its decision to terminate all existing contracts of mobile catering (currently kept in abeyance) involving the scope of work of providing cooked food to passengers prepared from base kitchens as per the existing terms and conditions. In a separate release, the ministry has conveyed the decision to resume the services of cooked food in trains.

Cadila Healthcare: Zydus Cadila has received final approval from the USFDA to market Decitabine for injection in the strength of 50 mg/vial single-dose vial. Decitabine is used to treat myelodysplastic syndromes, certain types of blood or bone marrow cancer.

Kesoram Industries: Board approved to raise funds up to Rs 2,500 crore by way of equity, bond, FCCB, ADR, GDR, commercial paper and/or other debt instruments. This fundraising is primarily to retire the company's existing debt and bring down the cost of borrowing.

India Grid Trust: Consortium of IndiGrid 1 and IndiGrid 2 participated in the tariff-based competitive bidding to establish 'Transmission system for evacuation of power from Renewable (RE) projects in Osmanabad area (1 GW) in Maharashtra' on build, own, operate and maintain (BOOM) basis by REC Power Development and Consultancy. The estimated cost for the same is around Rs 170 crore. The company awaits receipt of Letter of Intent.

Amber Enterprises India: The company and its subsidiary IL JIN Electronics India have received approval from the Ministry of Commerce & Industry under the Production-Linked Incentive scheme for white goods (air conditioners). 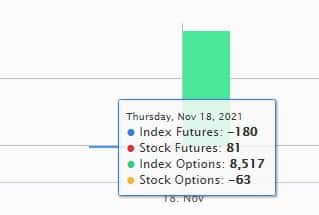 Six stocks - BHEL, Escorts, Vodafone Idea, NALCO, SAIL and Sun TV Network - are under the F&O ban for November 22. Securities in the ban period under the F&O segment include companies in which the security has crossed 95 percent of the market-wide position limit.