Nifty declined 2.4 percent for the week, forming a long bear candle on the weekly chart and placing at the edge of moving below the significant trend line support at 11,600 levels, as per change in polarity.

The market closed lower for a second consecutive session on October 30, the first day of the November series. Traders now keenly await direction from the US elections slated next week and clarity on the looming threat from the second wave of coronavirus cases across the US and Europe.

"We observe back to back weakness in the last two sessions, post the formation of a long bear candle of October 28. After the downside range breakout recently, the Nifty struggled to sustain above the hurdle of the range breakout area at 11,750 levels, as per the concept of change in polarity. The formation of lower highs of a smaller swing on the daily chart could signal a possibility of further weakness below 11,600 levels again," Nagaraj Shetti, Technical Research Analyst at HDFC Securities told Moneycontrol.

Nifty declined 2.4 percent for the week, forming a long bear candle on the weekly chart and placing at the edge of moving below the significant trend line support at 11,600 levels, as per change in polarity.

"After the upside breakout of this trend line in the early part of October, the Nifty failed to show any meaningful follow-through an upmove later, as it moved in a broader sideways range with weak bias. Hence, this pattern could signal a chance of Nifty showing further weakness in the next week, before showing any meaningful upside bounce," Shetti said.

The broader markets closed mixed. The Nifty Midcap index was up half a percent while the Nifty Smallcap declined third of a percent.

Maximum Call open interest of 15.70 lakh contracts was seen at 12,000 strike, which will act as crucial resistance in the November series.

There was hardly any Call unwinding seen on October 30.

Maximum Put open interest of 21.73 lakh contracts was seen at 11,000 strike, which will act as crucial support in the November series.

An increase in open interest, along with a decrease in price, mostly indicates a build-up of short positions. Based on the open interest future percentage, here are top 10 stocks in which short build-up was seen. 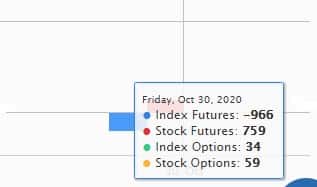 Not a single stock is under the F&O ban for November 2. Securities in the ban period under the F&O segment include companies in which the security has crossed 95 percent of the market-wide position limit.