Based on the open interest future percentage, here are the 147 stocks including Sun TV Network, Coromandel International, Vodafone Idea, ONGC, and Mahindra & Mahindra, in which long unwinding was seen.

The market closed its rangebound session on a negative note, extending losses for the second straight day on June 30, a monthly expiry day for June futures & options contracts. The correction in global counterparts also weighed on the sentiment.

The BSE Sensex dropped eight points to 53,019, while the Nifty50 declined 19 points to 15,780 and formed Doji kind of pattern on the daily charts, which indicates indecisiveness among bulls and bears.

He further said that after the formation of false upside breakout at 15,800 levels on June 27, the absence of any sharp weakness from near the hurdle in the last three sessions could be in favour of bulls to make a comeback from the lows. But, any decisive move below 15,600 levels is likely to negate the bullish bet and could result in sharp weakness down to 15,200 levels, the market expert added.

The broader space underperformed frontliners with the Nifty Midcap 100 falling 0.8 percent and Smallcap declining half a percent on weak market breadth. About two shares declined for every rising share on the NSE.

Maximum Call open interest of 98.88 lakh contracts was seen at 16,000 strike, which will act as a crucial resistance level in the July series.

Maximum Put open interest of 73.42 lakh contracts was seen at 15,400 strike, which will act as a crucial support level in the July series.

A high delivery percentage suggests that investors are showing interest in these stocks. The highest delivery was seen in Bharat Forge, Page Industries, Ambuja Cements, Voltas, and Atul, among others. 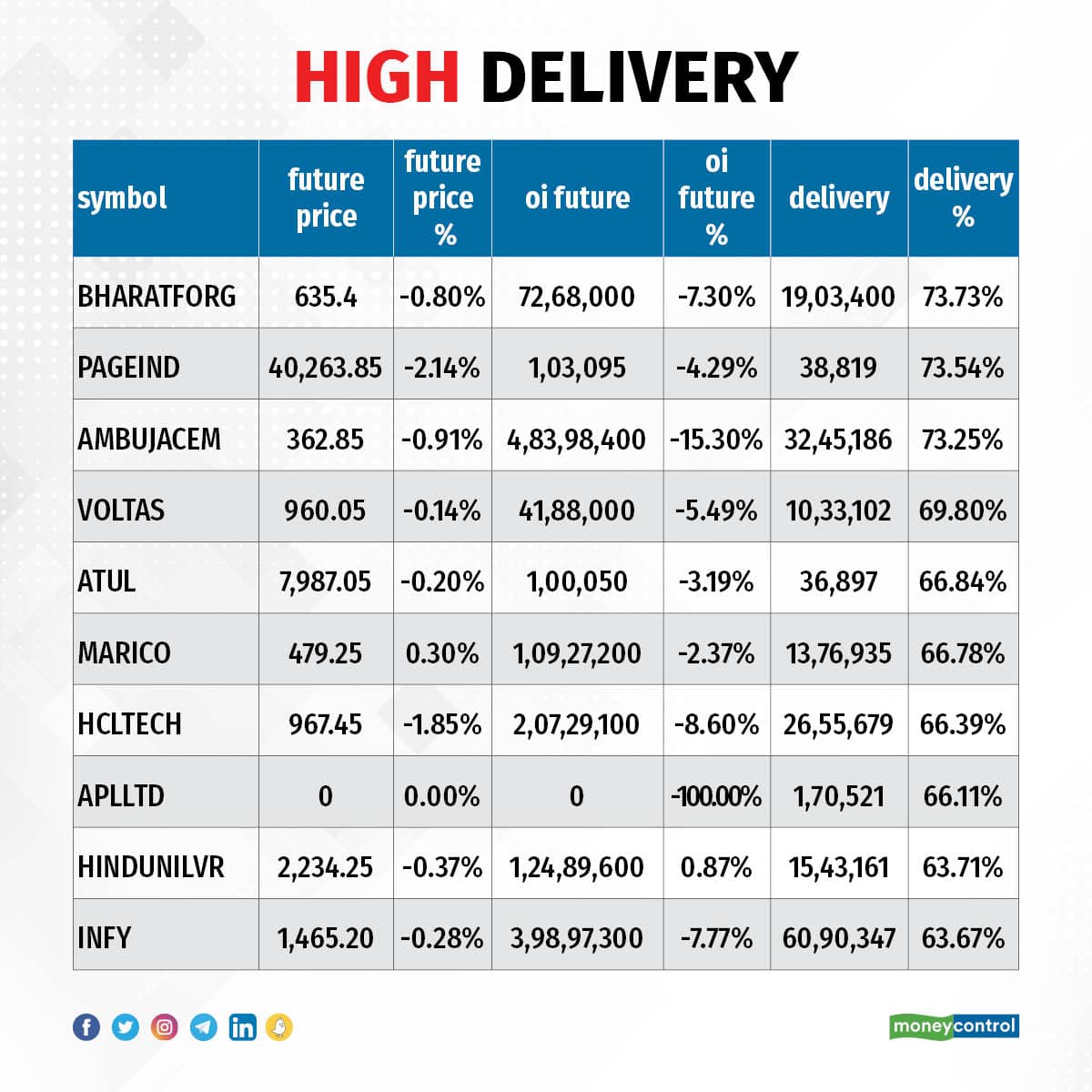 An increase in open interest, along with an increase in price, mostly indicates a build-up of long positions. Based on the open interest future percentage, here are the three stocks - MCX India, Ramco Cements and Honeywell Automation, in which a long build-up was seen.

A decline in open interest, along with a decrease in price, mostly indicates a long unwinding. Based on the open interest future percentage, here are the top 10 stocks including Sun TV Network, Coromandel International, Vodafone Idea, ONGC, and Mahindra & Mahindra, in which long unwinding was seen. 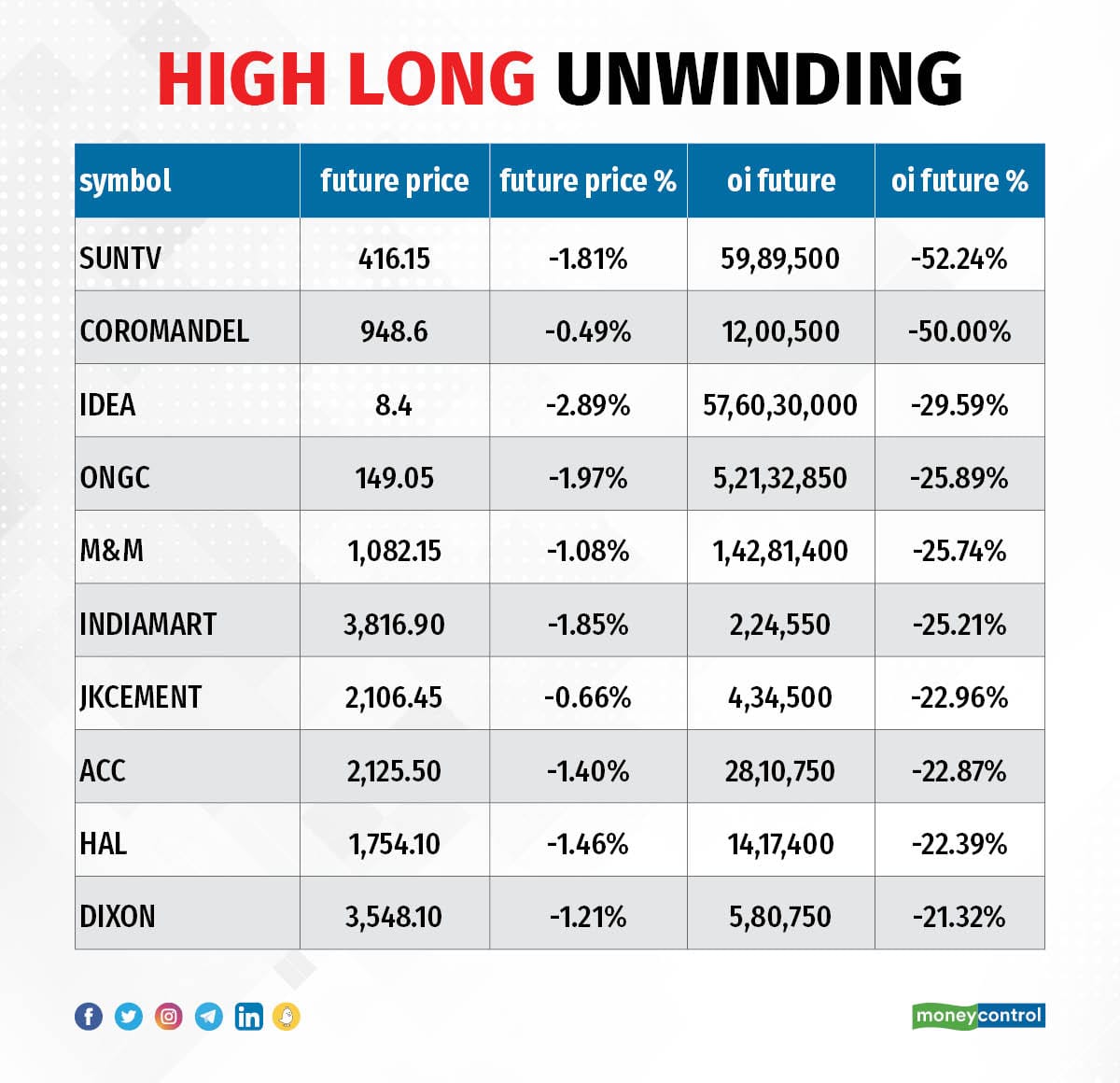 An increase in open interest, along with a decrease in price, mostly indicates a build-up of short positions. Based on the open interest future percentage, here are the 10 stocks including Indian Oil Corporation, Delta Corp, Deepak Nitrite, Indiabulls Housing Finance, and Oberoi Realty, in which a short build-up was seen. 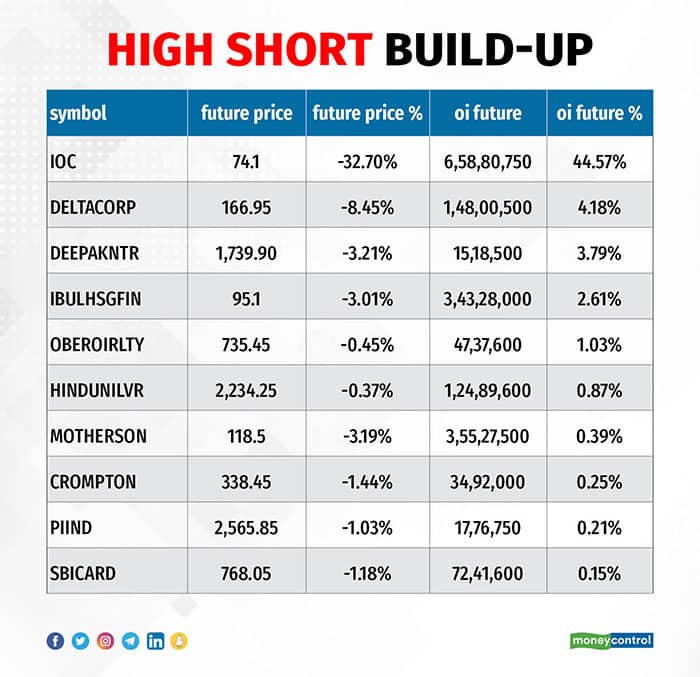 A decrease in open interest, along with an increase in price, mostly indicates a short-covering. Based on the open interest future percentage, here are the top 10 stocks including ABB India, NTPC, REC, Max Financial Services, and United Breweries, in which short-covering was seen. 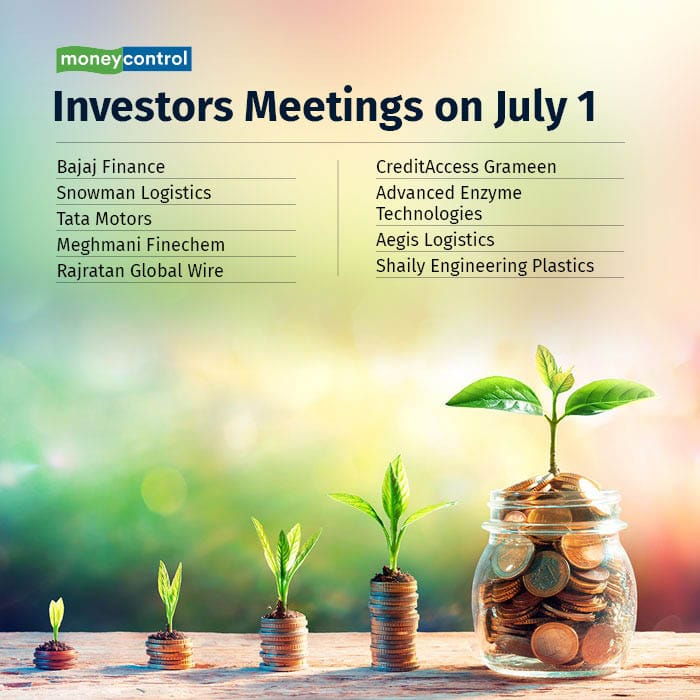 Bajaj Finance: Officials of the company will interact with a group of institutional investors and funds at San Francisco.

Snowman Logistics: Officials of the company will meet Oldbridge Capital.

Meghmani Finechem: Officials of the company will meet Jefferies India.

Rajratan Global Wire: Officials of the company will meet B & K Securities.

CreditAccess Grameen: Officials of the company will meet Girik Capital.

Aegis Logistics: Officials of the company will meet analysts and investors.

Shaily Engineering Plastics: Officials of the company will meet analysts and investors.

The Phoenix Mills: The company, RZPL and each of PML subsidiaries (viz. Offbeat Developers-ODPL, Graceworks Realty and Leisure-GRLPL and Vamona Developers-VDPL) have executed an additional subscription agreement. After this, Reco Zinnia (RZPL), owned by GIC (Realty), has completed its second tranche of investment of Rs 400 crore across ODPL, VDPL and GRLPL on private placement basis by subscribing to the equity shares of each of the PML subsidiaries. As a result, Phoenix Mills (PML) and RZPL hold 67.10 percent and 32.90 percent respectively, stakes in each of the PML subsidiaries.

Globus Spirits: GSL will be providing various services starting from engineering to ongoing operations, maintenance, and marketing services for distillery assets owned by Tilaknagar Industries. It has entered into an arrangement for strategic, technical, manufacturing and marketing tie-up with the aim to offer an integrated service to operate the plant at the envisaged rated capacity of 140 KLPD distillery asset owned by TIL located at Ahmednagar, Maharashtra. The company will get service fee as a share of EBIDTA generated by the distillery assets.

UPL: The company has acquired 100 percent holding in Nature Bliss Agro (NBAL) and accordingly, NBAL becomes a wholly-owned subsidiary of the company. NBAL proposes to carry out the business of manufacture and sale of crop protection and allied products, which has synergy with the existing business activities of UPL.

Lupin: The pharma company has received approval from US FDA for its Abbreviated New Drug Application (ANDA) - Paliperidone extended-release tablets. The drug is a generic equivalent of Invega extended-release tablets of Janssen Research and Development, LLC. The product will be manufactured at Lupin's facility in Goa. The drug had estimated annual sales of $152 million in the US as per IQVIA MAT March 2022 data. The drug is used in the treatment of schizophrenia, a mental disorder.

Blue Star: CARE has reaffirmed its long term, and short term rating on credit facilities and non-convertible debentures at AA+, but revised the outlook from 'Negative' to 'Stable' based on healthy recovery and demand for air-conditioning and refrigeration products post the ebbing of the second wave of the pandemic and consequent improvement in the operating and financial performance for FY22.

Kridhan Infra: Rajeshree Indradev has resigned as Chief Financial Officer of the company on June 30. The company is in the process of identifying or hiring new person for the vacant position.

Disclaimer: The views and investment tips expressed by investment experts on Moneycontrol.com are their own and not those of the website or its management. Moneycontrol.com advises users to check with certified experts before taking any investment decisions.
Sunil Shankar Matkar
Tags: #Market Cues #Market Edge #Nifty #Sensex #Trade Setup #video
first published: Jun 30, 2022 09:44 pm