Based on the open interest future percentage, here are the 155 stocks including Nifty Financial, Zydus Life, GNFC, PFC, and Tata Communications, in which short-covering was seen.

The market snapped a three-day losing streak and closed with nearly one percent gains on May 26 driven by banking & financial services, IT, metal, and select auto stocks on the last day of the futures & options (F&O) contracts for the May series.

The BSE Sensex rallied 503 points to 54,253, while the Nifty50 rose 144 points to 16,170 and formed a bullish candle on the daily charts as the closing was higher than opening levels.

The rally was also seen in broader space on positive market breadth. The Nifty Midcap 100 index rose 1.35 percent and Smallcap 100 index gained 0.77 percent as five shares advanced for every four declining shares on the NSE.

On the daily charts, the Nifty managed to sustain above the 16,000 mark for the last 5 days which shows an initial sign of short-term bottoming out.

He feels that the Nifty is in bounce-back mode. "If the Nifty sustains above 16,400 mark then it will move towards 16,800 mark in the coming days. Our positive view will be negated if it sustains below the 16,000 mark."

The volatility declined significantly, indicating comfort for bulls but experts feel unless and until it falls decisively below the 20 mark, the volatile swings can't be ruled out. India VIX, the fear index fell by 10.14 percent to 22.72 levels.

Maximum Call open interest of 97.05 lakh contracts was seen at 16,200 strike, which will act as a crucial resistance level in the June series.

Maximum Put open interest of 70.19 lakh contracts was seen at 16,000 strike, which will act as a crucial support level in the June series.

A high delivery percentage suggests that investors are showing interest in these stocks. The highest delivery was seen in Ipca Laboratories, TCS, HCL Technologies, Infosys, and Hindustan Unilever, among others. 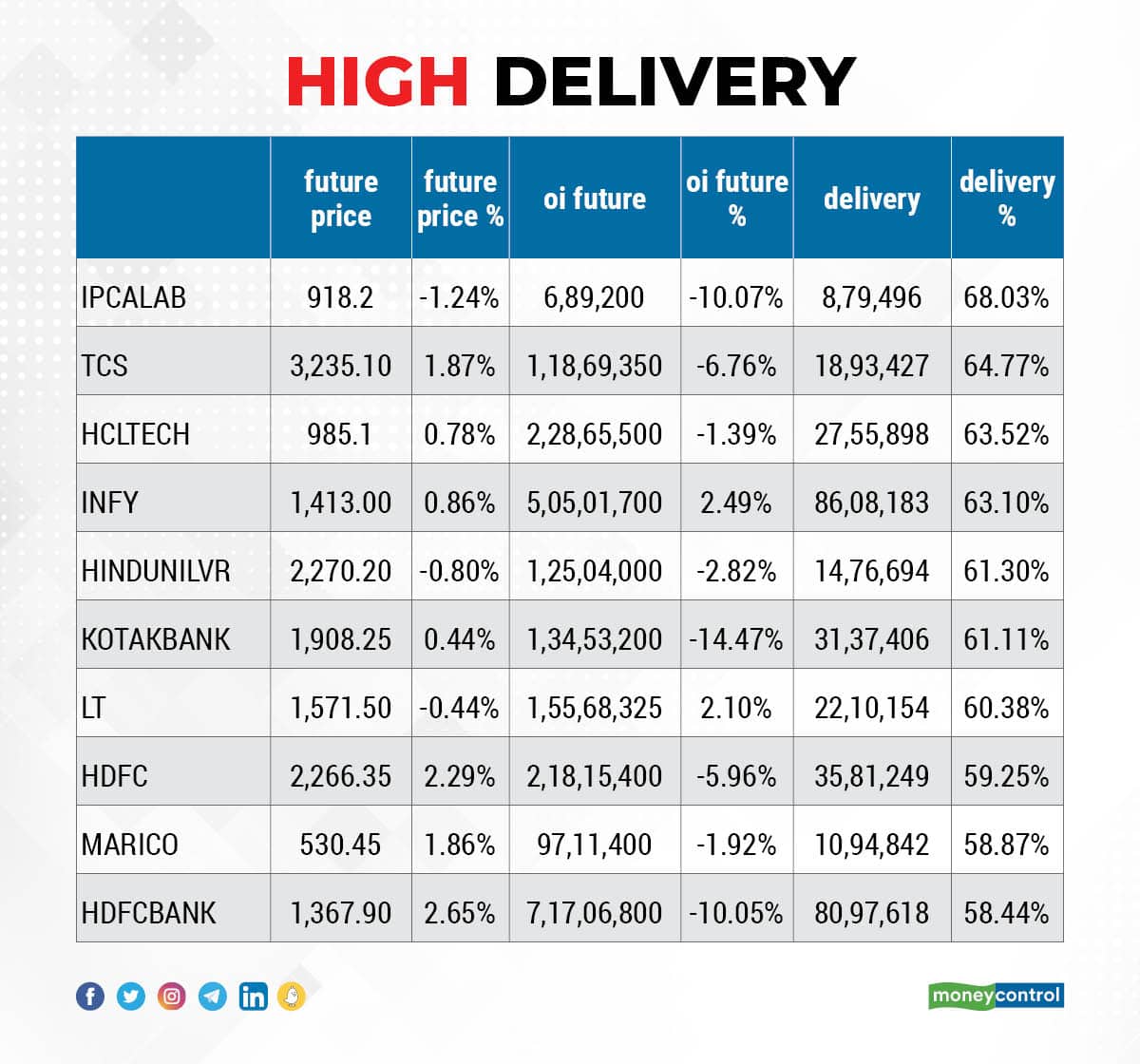 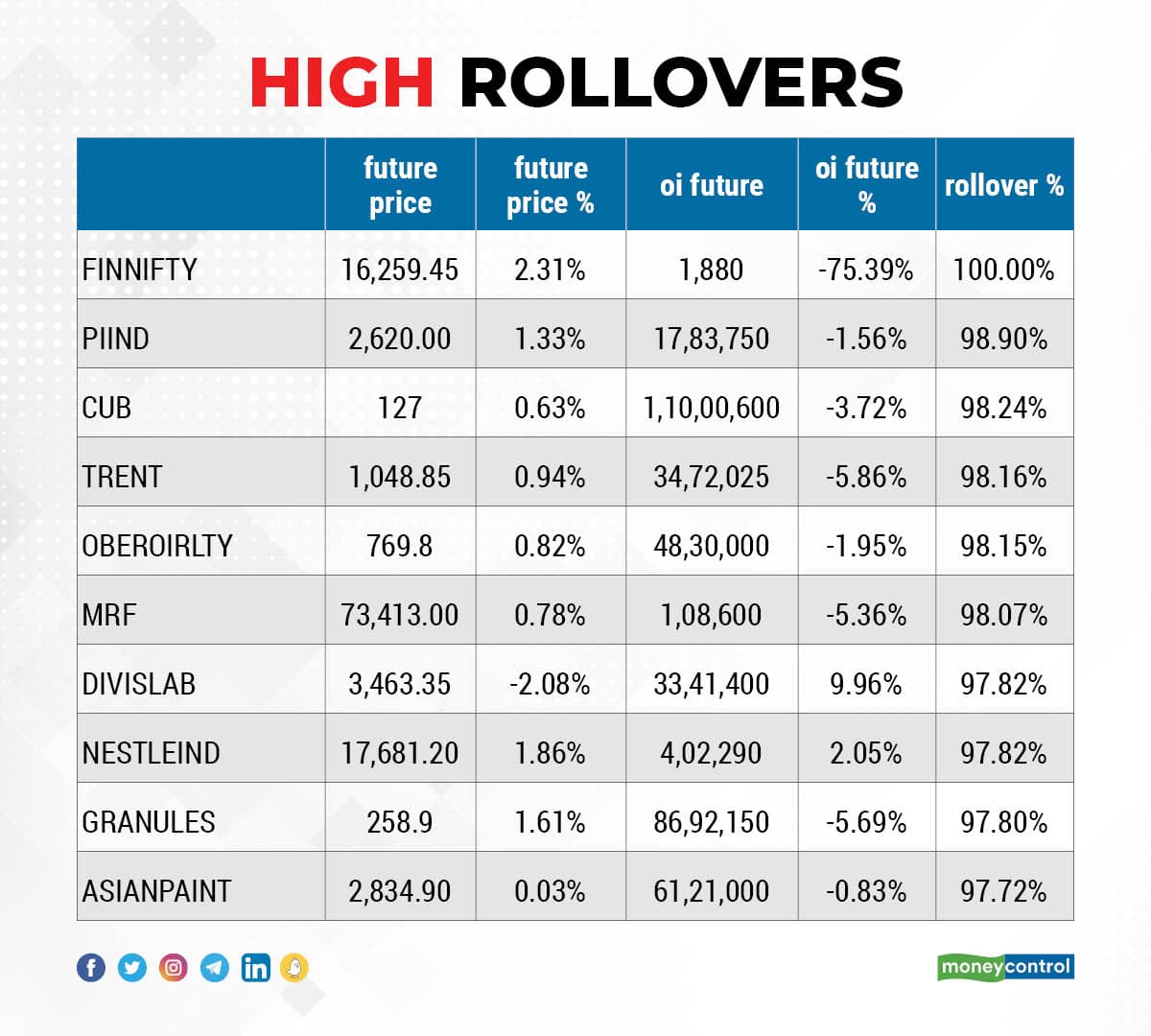 An increase in open interest, along with an increase in price, mostly indicates a build-up of long positions. Based on the open interest future percentage, here are the top 10 stocks including Apollo Tyres, Torrent Pharma, InterGlobe Aviation, Infosys, and Nestle India, in which a long build-up was seen. 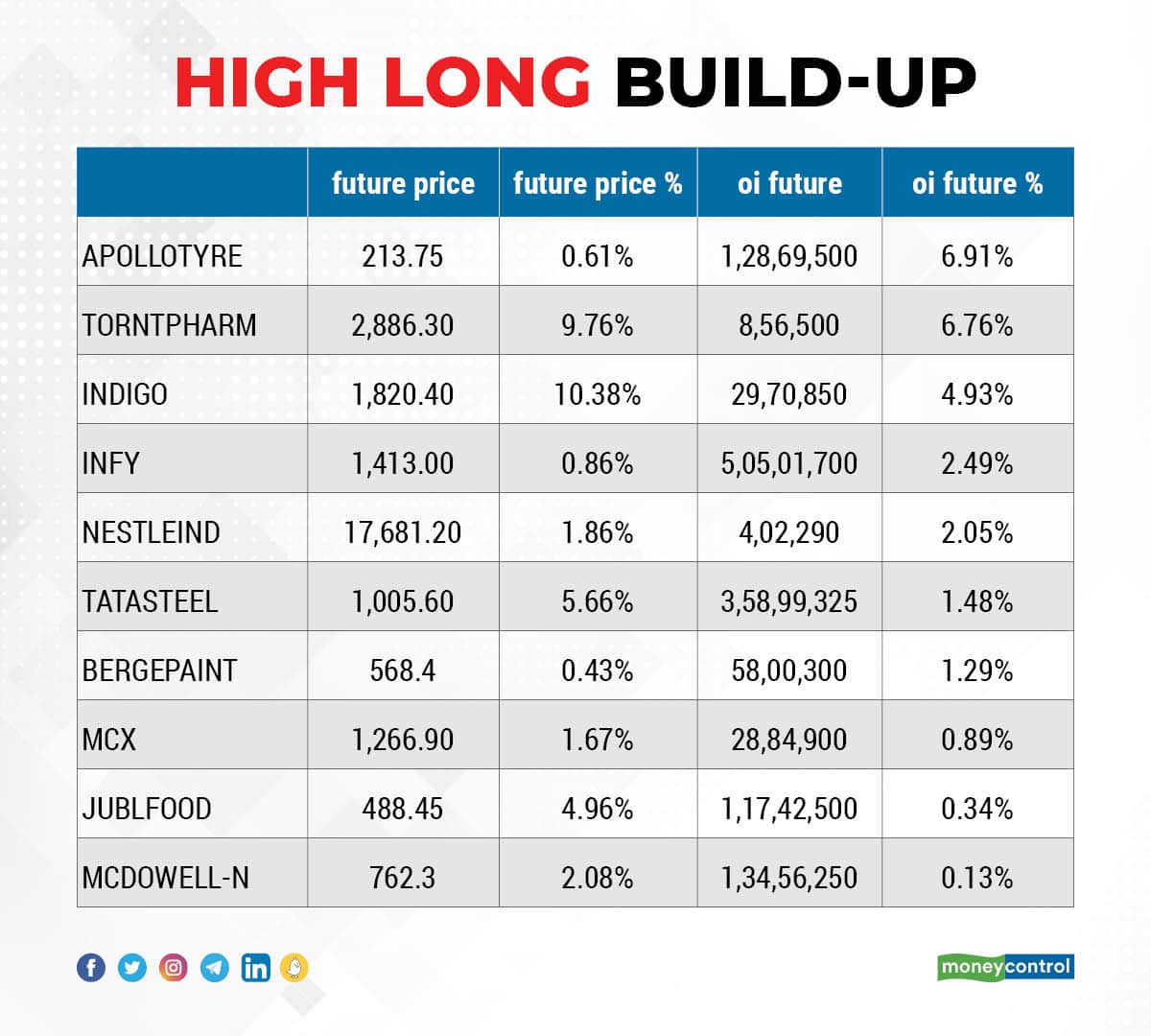 A decline in open interest, along with a decrease in price, mostly indicates a long unwinding. Based on the open interest future percentage, here are the top 10 stocks including Abbott India, IOC, Honeywell Automation, Vodafone Idea, and ONGC, in which long unwinding was seen. An increase in open interest, along with a decrease in price, mostly indicates a build-up of short positions. Based on the open interest future percentage, here are the five stocks - Divi's Laboratories, Havells India, Larsen & Toubro, Reliance Industries, and Adani Enterprises, in which a short build-up was seen. 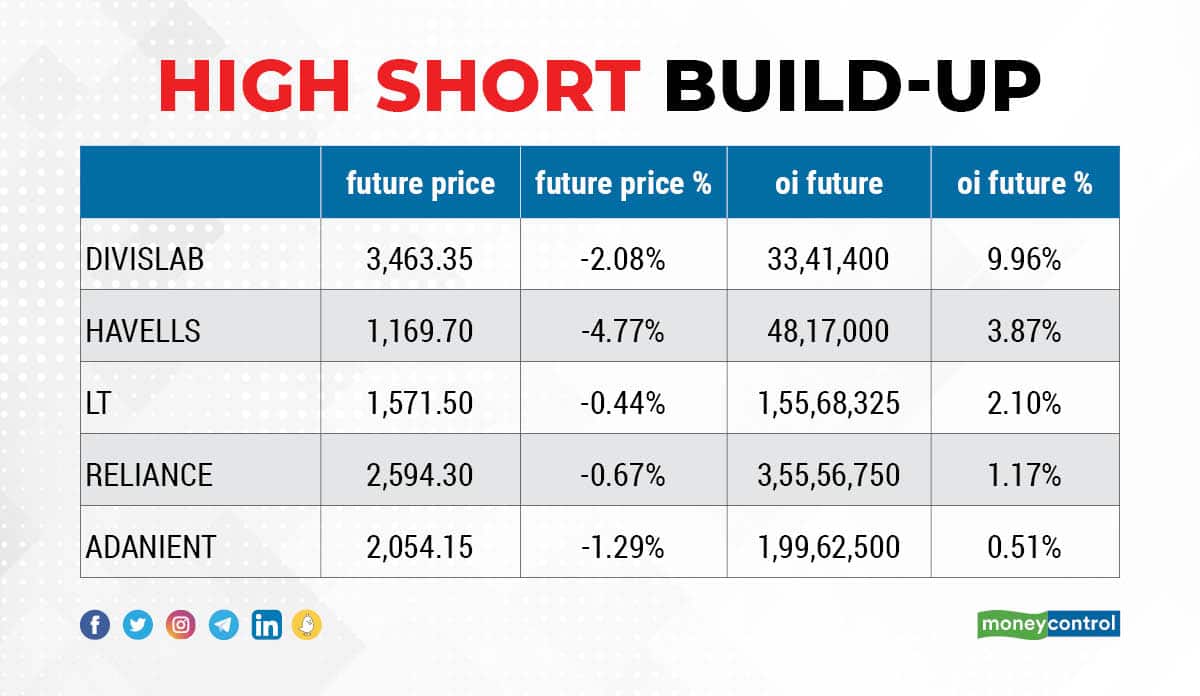 A decrease in open interest, along with an increase in price, mostly indicates a short-covering. Based on the open interest future percentage, here are the top 10 stocks including Nifty Financial, Zydus Life, GNFC, PFC, and Tata Communications, in which short-covering was seen. Muthoot Finance consolidated net dipped 2.3 percent year-on-year to Rs 997 crore for the quarter ended March 2022, as compared to a profit of Rs 1,020 crore recorded during the same period last year. The consolidated revenues also witnessed a YoY decline of 2.7 percent to Rs 3,021 crore. The dip in profit is attributable to lower revenues and higher employee costs partially negated by lower impairment on financial instruments.

Bharat Dynamics' Q4 net profit improved marginally by 1.5 percent year-on-year to Rs 2,644 crore as compared to a profit of Rs 2,604 crore during the same period last year. The dip was due to higher employee and inventory costs as well as rise in other expenses which was partially negated by an exceptional income of Rs 335 crore during the quarter. The revenues increased by 21.5 percent on year to Rs 13,811 crore.

Tata Power Renewable commissioned 100 MW project for MSEDCL in Partur, Maharashtra. The installation is comprised of over 4,11,900 numbers of monocrystalline PV modules and is expected to reduce around 234 million tonnes of CO2 annually. With this addition of 100 MW, the renewables capacity in operation for Tata Power now stands at 3,620 MW with 2,688 MW of Solar and 932 MW of Wind. Tata Power’s total Renewable capacity is 4,920 MW including 1,300 MW of Renewable projects under various stages of implementation.

Hindalco Industries Q4 consolidated net doubled YoY to Rs 3,851 crore as against Rs 1,928 crore recorded a year ago. Consolidated revenue for one of the largest metals company in India rose 37.7 percent on-year to Rs 55,764 crore as compared to a revenue of Rs 40,507 crore registered in the year-ago quarter. The growth was aided by the surge in commodity prices and higher volumes. The company recommended a dividend 400 percent (Rs 4 per share) for FY22 as against 300 percent (Rs 3 per share) for FY21.

RITES signed a memorandum of understanding (MoU) with Titagarh Wagons to synergise their efforts in their respective fields. Under this agreement, RITES will provide expertise in design, marketing, operations & maintenance, and support for tapping domestic and international markets while Titagarh Wagons will develop and manufacture suitable products and submit competitive offer as per the requirement of potential clients and customers in domestic and overseas markets.

Zee Entertainment Enterprises has reported 34 percent fall in its March quarter (Q4FY22) net profit at Rs 181.9 crore from Rs 275.7 crore in the same quarter last fiscal. The company revenue rose 18.1 percent at Rs 2,322.9 crore versus Rs 1,965.8 crore, YoY. The company board recommended for approval of the equity shareholders, equity dividend of Rs 3 per equity share of Re 1 each for the financial year 2021-22.