Rajesh Palviya of Axis Securities feels the overall short-term trend is still intact upward. One should use any pullback rally towards 17,600-17,500 levels as a buying opportunity with a stop-loss of 17,400 with an upside towards 18,000-18,200 levels, he advised.

The market snapped four-day winning streak and corrected one percent on January 6, as the selling pressure was seen banking & financials, FMCG, IT, Metals and Pharma stocks, after the correction in global peers as FOMC minutes indicated a faster-than-expected rate hikes. The rising coronavirus cases also dented sentiment.

"The index opened sharply lower with a downward gap and remained consolidated within a narrow range throughout the session. The daily price action has formed a small bearish candle forming lower High-Low compared to the previous session and has also closed below the previous session's low, indicating weakness. Hence, any breakout of Doji's high-low range may signal further direction," says Rajesh Palviya, VP - Technical and Derivative Research at Axis Securities. 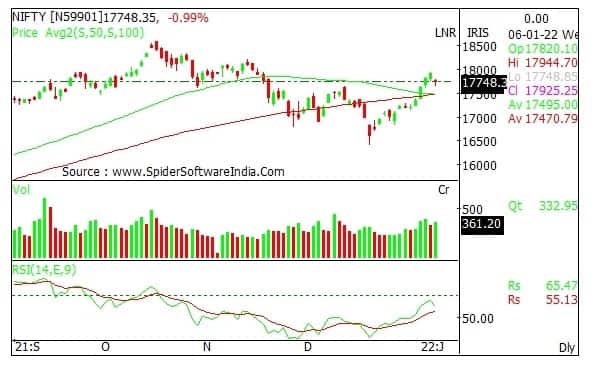 Maximum Call open interest of 20.79 lakh contracts was seen at 18000 strike, which will act as a crucial resistance level in the January series.

Maximum Put open interest of 33.51 lakh contracts was seen at 17000 strike, which will act as a crucial support level in the January series.

Analysts/Investors Meeting; and Results on January 7 and January 8

Allcargo Logistics: To meet Sell Side Analyst on January 7.

Reliance Industries: Dunzo, India’s leading quick commerce player, has raised $240 million in its latest round of funding. The investment was led by Reliance Retail Ventures, with participation from existing investors Lightbox, Lightrock, 3L Capital and Alteria Capital. With an investment of $200 million, Reliance Retail will own 25.8% stake in Dunzo on a fully diluted basis.

Godrej Consumer Products: At a consolidated level, the company expects to deliver close to high single-digit sales growth in Q3FY22. On the profitability front, it expects quality of profits to improve with sequentially expanding gross margins, however, lower on a year-over-year basis due to unprecedented cost inflation. One stock - RBL Bank - is under the F&O ban for January 7. Securities in the ban period under the F&O segment include companies in which the security has crossed 95 percent of the market-wide position limit.