Shrikant Chouhan of Kotak Securities is of the view that the intraday texture of the market is weak and is likely to continue for some time.

The selling pressure continued in the Indian equity benchmarks as well as broader markets on October 21, dragged by weak global cues. The correction in FMCG, IT, and Metals stocks pulled the market down, but banking and financials and auto stocks supported the market.

"Weak global cues triggered selling pressure for the third day in a row, while for one more time bears took the aggressive stance near the 18,350 resistance level. Technically, after a short-term price correction, the Nifty took support near the 18,050 level and reversed sharply. The index has formed a bearish candle on daily charts but at the same time, it took support near the important retracement level of 18,030," said Shrikant Chouhan, Head of Equity Research (Retail) at Kotak Securities.

Maximum Call open interest of 42.38 lakh contracts was seen at 18500 strike, which will act as a crucial resistance level in the October series.

Westlife Development: The company's officials will meet investors and analysts on October 28 to discuss the financial performance. 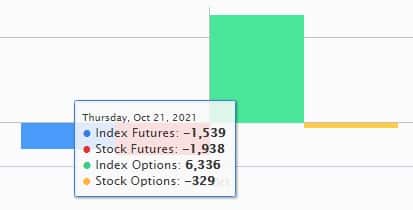 Ten stocks - Amara Raja Batteries, Escorts, Vodafone Idea, IRCTC, L&T Finance Holdings, NALCO, Punjab National Bank, SAIL, Sun TV Network and Tata Power - are under the F&O ban for October 22. Securities in the ban period under the F&O segment include companies in which the security has crossed 95 percent of the market-wide position limit.