The market gained momentun in the afternoon session on May 6 with the Nifty50 climbing more than half a percent to close above 14,700 levels, driven by auto, IT, metals and select FMCG stocks.

"A reasonable long candle was formed with minor lower shadow. Technically, this pattern signals a buy-on-dips in the market amidst a range movement. The long lower shadow of the last two rising candles shows emergence of buying on intraday dips," Nagaraj Shetti, Technical Research Analyst at HDFC Securities told Moneycontrol.

The broader markets also participated in the run with the Nifty Midcap 100 index rising 0.94 percent and Smallcap 100 index up 0.7 percent.

Maximum Call open interest of 26.86 lakh contracts was seen at 15,000 strike, which will act as a crucial resistance level in the May series.

Maximum Put open interest of 34.49 lakh contracts was seen at 14,000 strike, which will act as a crucial support level in the May series.

Aurionpro Solutions: Aurionpro exited from the cybersecurity business with the sale of its investment to Forcepoint LLC., USA. The deal, for the divestment of all stake held by Aurionpro in its cyber security business is valued at a consideration of $9.6 million.

IRB Infrastructure Developers: Life Insurance Corporation of India acquired over 71.29 lakh equity shares in the company (2.03% of paid up equity), raising stake in the company to 7.06% from 5.03% earlier. 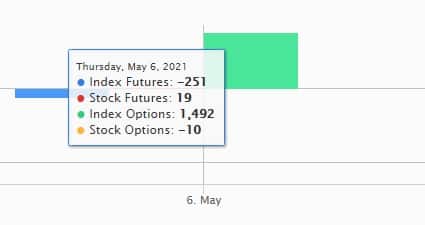 Three stocks - BHEL, Sun TV Network and Tata Chemicals - are under the F&O ban for May 7. Securities in the ban period under the F&O segment include companies in which the security has crossed 95 percent of the market-wide position limit.
Sunil Shankar Matkar
Tags: #Market Cues #Market Edge #Nifty #Sensex #Trade Setup #video
first published: May 6, 2021 10:17 pm