Thursday's minor weakness has not changed the status of near- term positive trend of the market, says Nagaraj Shetti of HDFC Securities.

The market failed to retain the momentum seen in the previous eight consecutive sessions, with the benchmark indices falling half a percent on November 12. Even the announcement of Rs 2.65 lakh crore stimulus package under AtmaNirbhar Bharat 3.0 by Finance Minister Nirmala Sitharaman could not let the market hold uptrend.

"The formation of minor weakness with range-bound action, post sharp trended upmove of the last 7 sessions could be positive for the bulls to make a comeback. This pattern could indicate an inherent strength of a recent uptrend and lack of selling enthusiasm in the market at the new highs. Normally, such a pattern could eventually result in an upside breakout, after some more choppy movement," Nagaraj Shetti, Technical Research Analyst at HDFC Securities, told Moneycontrol.

The market breadth was in positive on Thursday despite weakness in the benchmark index. About three shares advanced for every two declining shares on the NSE.

As a result, the broader markets outperformed benchmark indices. The Nifty Midcap 100 and Smallcap 100 indices have ended on a positive note by registering gains of around 0.60 percent and 1.31 percent respectively. This is a positive indication, Shetti feels.

"Thursday's minor weakness has not changed the status of near term positive trend of the market. Hence there is a possibility of further 1-2 sessions of consolidation movement with minor weakness, before showing any upside breakout above 12,770 levels. Immediate support is placed at 11,580," Shetti said.

Maximum Call open interest of 20.36 lakh contracts was seen at 13,000 strike, which will act as crucial resistance level in the November series.

Maximum Put open interest of 34.66 lakh contracts was seen at 12,000 strike, which will act as crucial support in the November series. 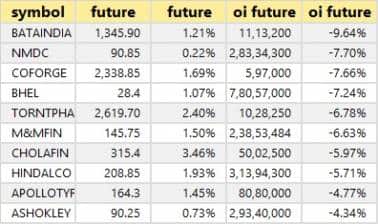 Grasim Industries: The company reported a lower standalone profit at Rs 360.2 crore in Q2FY21 against Rs 526.5 crore, revenue declined to Rs 3,438.2 crore from Rs 4,795.1 crore YoY. The board approved the sale of fertiliser operations to Indorama for Rs 2,650 crore.