2015 to be another good yr for mkt; like cyclicals: Antique

The market will continue to do reasonably well in 2015 and there is no reason to worry despite the bloodbath seen in the market yesterday, says Dhirendra Tiwari, head of research, Antique Institutional Equities.

According to Tiwari, the huge sell-off in the market on Tuesday was way too dramatic and such things do happen over the period of time so there is no reason to worry about this fall. With macros improving and government reforms on track, global turmoil is the only concern.

In an interview to CNBC-TV18, Tiwari says cyclicals will outperform defensives and export sectors now. In the next two-three months market might see some correction but that must be used as a buying opportunity. He also expects good opportunities in sectors like banks, capital goods and automobiles in 2015.

Q: Despite that big fall we saw yesterday a lot of experts are still quite positive on the markets, would you be in that camp as well and what would you advise investors to do now? 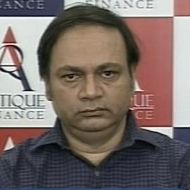 A: Yes, we continue to be positive. If you look at our recent strategy report we maintain that the market will do reasonably well in 2015. Yesterday’s fall was quite dramatic and very difficult to explain but such falls do happen at times.

If I look at the next twelve months or so the various catalysts that are important for markets are going to turn positive whether it is interest rate, inflation, earnings momentum etc government policymaking so there is no reason for us to believe that structurally there is any problem with the market movement, valuations are reasonable at about fifteen times FY16 earnings, so we believe that there is a reasonable scope for markets to go up in 2015 and we maintain that view at this point in time.

Q: While the local cues may be positive and may keep the long-term trend intact for the market, the global markets appear to be in a bit of a flux so in the near-term are you worried about the trend of the market?

A: Global issues are the only negative catalyst for the market and if you look at the oil price, one can argue that there may be some sort of risk towards the global slowdown, now when we look at global slowdown, there are various pockets there is China, European Union (EU) and there is US. As long as the US economy does well Indian market tends to do reasonably well. That is the positive thing.

Having said that, various issues with respect to global economies whether the entire Europe or certain countries going out of euro zone etc or a specific countries like Russia etc crumbling under the pressure of falling oil prices, these are the headlines which will keep market movement under check for sometime, but they have rarely proven to be fatal in nature in the past.

So, they are some sort of intermediate problems, which will be resolved and Indian markets will tend to do based on domestic policymaking and recovery and also may be the largest economy US is doing reasonably well.

In the near-term, next two three months will be important from the global prospective but I would assume that these corrections may be opportunities to buy Indian equities.

Q: What should one be buying at this juncture now?

A: I maintain that generally when the cyclical upturns happen, they happen not just for one year they go for two-three years. If you look at last year we had very strong performance by cyclicals prior to May 2014, post formation of government.

The cyclicals have behaved just in line when the market was slightly underperforming. I believe cyclicals will do well in 2015 because earnings recovery will happen in FY16 - 17, so I like bank, non-banking financial companies (NBFCs), automobiles, capital goods specifically these sectors where you could see good opportunities from next one to one and a half years point of view.

We believe that cycliclas as a category can report about 28 percent earnings compound annual growth rate (CAGR) over next two years so that makes them quite attractive from investment point of view.

Q: What kind of clarity do you expect on the subsidy sharing and the reforms in the oil and gas space and are you disappointed by its slow pace?

A: When oil prices fall, upstream companies tend to underperform and which is happening today and if one looks at the reform, I am not disappointed they have been reasonably on track though one can argue that there are various things which could have been done more. Issue here is that these stocks did pretty well and they reasonably are factoring into the near-term prospects.

While as a category we have liked oil marketing companies (OMCs) in the past, but we believe that the structural part of story is more or less discounted and it is better to hold some of them, but may not see a big upside from hereon.

One would be more looking at some of the gas opportunities in oil and gas space where there could be structural shift from level one to the next level. Companies, which are into gas distribution, will be the ones that can be looked from a long-term investment point of view.