172@29@17@243!~!172@29@0@53!~!|news|business|footwear-q1-premium-products-asset-light-expansion-to-determine-re-rating-2903001.html!~!news|moneycontrol|com!~!|controller|infinite_scroll_article.php!~!is_mobile=false
Watch experts decode 'The rise of ESG investing' on October 29 at 4pm. Register Now!
you are here: HomeNewsBusiness

While Relaxo and Sreeleathers reported healthy top-line growth YoY, Bata was the standout performer on the margin front.

Most consumer discretionary companies reported sluggish revenue traction in the quarter gone by on account of a high base in the same quarter a year ago, that saw a surge in buying ahead of the implementation of the Goods and Service Tax (GST) from Q2 FY18.

Barring Relaxo and Sreeleathers, other players in the industry exhibited modest top-line performance. On the margin front, Bata India was clearly the standout performer.

An increase in average selling prices of footwear was the main contributor to the company’s revenue growth, while year-on-year (YoY) volume growth was minimal.

Revenue growth was muted because of slow traction in the company’s 'retail' segment, that deals in premium footwear. The 'distribution' segment, through which economically priced footwear is sold, maintained its growth trajectory.

High lease rentals, expenditure relating to branding and an increase in freight expenses led to a contraction in margins.

While the company’s branded footwear segment (primarily B2C in nature) sales witnessed strong growth, there was a sharp de-growth in the B2B footwear and leather segments. The weak top-line performance took a toll on margins.

The company registered good revenue growth YoY on the back of higher sale volumes. Cost efficiencies kept the disadvantage of high raw material and employee costs at bay.

Addition of new stores enables footwear majors to tap new geographies and/or establish themselves more strongly in existing markets. This is particularly important not only in augmenting sales, but also tackling any future weakness in same-store sales growth. 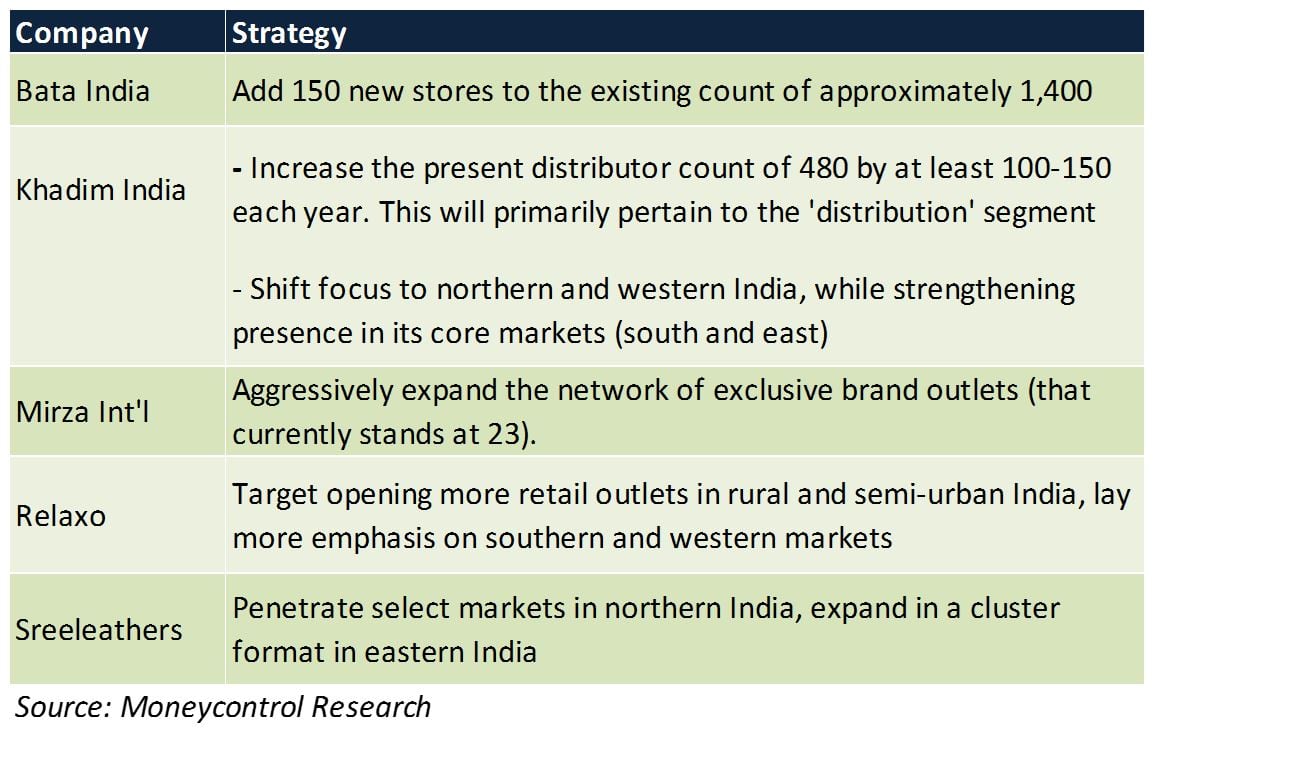 To offset this, footwear players are trying to keep rent expenses low by resizing stores and renegotiation of agreement terms with property owners.

Considering how fragmented and diverse the Indian market is, the process could be challenging and generally involves high investments in initial years to position the product correctly in the minds of prospective buyers.

To facilitate brand building and enhance product visibility, footwear majors are likely to up the ante on this front. Spends on marketing activities usually gain momentum in the second half of the fiscal owing to a favourable demand scenario (mainly on account of festivities and weddings).

As a percentage of sales, such costs generally tend to normalise at a faster pace in case of high-value footwear. However, for companies engaged in retailing low-value footwear, an increase in volumes can also help achieve this. In order to keep the business model capital light and generate higher returns on capital, footwear majors are tapping smaller cities and towns through the franchise-run route. This is because locals in such regions have a better understanding of the purchasing patterns out there and tend to connect with their customers closely.

Outsourcing manufacturing operations to third parties is another strategy that helps footwear companies lay more emphasis on their core strengths of product retailing and brand management, while simultaneously ensuring that avoidable cash outflows are minimised.

Premium products fetch higher realisations per pair vis-a-vis regular/unbranded ones and are also margin-accretive by nature. As a result, footwear majors are increasingly focusing on this front.

Though economy footwear cannot be sold at a high price, a healthy increase in the number of footwear pairs sold can lead to a corresponding uptick in margins. For instance, Khadim India aims to increase utilisation rates at the manufacturing facilities of its 'distribution' segment to derive the benefits of operating leverage.

In India, though purchases from brick-and-mortar outlets constitute a lion’s share of the footwear buying pie, the importance of online sales cannot be overlooked. Product buying dynamics are shifting gradually in favour of convenience shopping through e-commerce portals.

This necessitates developing omnichannel networks to widen the market reach, entering into tie-ups with different payment partners, establishing logistical solutions for faster deliveries and coming up with new offers/discounts from time to time.

Benefits of GST implementation will be clearly visible in the entry-level footwear category, where the target audience is aspirational and price conscious. This is because, the government, in a recent announcement, reduced GST rates on footwear in the Rs 500-1,000 per pair price range from 18 percent to 5 percent.

Furthermore, unorganised entities, which are dominant in this segment, may progressively lose market share to organised footwear players as high compliance costs compel them to take price hikes on their products.

Though each company may have its own set of challenges to contend with, some bottlenecks characterise India’s footwear industry as a whole.

These include stiff competition, an inability to pass on raw material cost escalations, high price sensitivity at the buyers’ end, no brand loyalty, subdued footfalls at stores and extended end of season sale periods.

Which stocks should you pick?

Bata and Relaxo, despite being well-discovered stocks, have re-rated noticeably of late and trade close to their 52-week high levels. We expect the premium valuations of both these companies to sustain given their strong brand appeal and robust financials. Therefore, accumulation on downsides is recommended.

Khadim India is expanding its retail reach extensively and also has a decent mix of economy and premium products. Decreasing capital intensity and paring debt is also on the agenda. The undemanding valuation makes it worthy of a portfolio inclusion for the long-run.

While Mirza International’s domestic business has been on an uptrend, its exports (mainly to the UK market) vertical continues to face difficulties, consequently causing strain on the working capital of the company. The leather segment’s margin has been a disappointment too.

Sreeleathers’ ability to deliver margins better than its peers every quarter and gain market share in its key markets makes it a good pick. The stock has been range-bound for quite some time. Investors may consider taking advantage of the time correction.