A sustainable move above 11,600 could have further positive impact on the market, says Nagaraj Shetti of HDFC Securities.

The market gained strength after a day of correction and climbed higher on the back of positive global cues and rally in banking and IT stocks on September 15.

"After the formation of a negative candlestick pattern of Monday, Nifty showing upside bounce today could signal a possibility of a retest of the upside resistance around 11,570-11,600 levels in the short term. A sustainable move above 11,600 could have a further positive impact on the market," Nagaraj Shetti, Technical Research Analyst at HDFC Securities, told Moneycontrol.

"It is going to be crucial to watch market behaviour at the hurdle of 11,600. As long as the swing high of August 31 (11,794-high of Bearish Engulfing as per daily and weekly chart) is protected, the broad-based upside momentum could be muted in the near term," he said.

The broader markets continued to outshine benchmark indices as the Nifty Midcap index was up 1 percent and Smallcap rose 1.5 percent.

"We are seeing noticeable buying across the board during this consolidation phase and it is indeed a positive sign. However, the participation of the banking pack is critical for any directional move in the index. Consider the prevailing scenario, we suggest keeping a close watch on the outcome of the US Fed meet for cues," Ajit Mishra, VP - Research at Religare Broking said.

Maximum Call open interest of 24.13 lakh contracts was seen at 12,000 strike, which will act as crucial resistance in the September series.

Maximum Put open interest of 27.15 lakh contracts was seen at 11,000 strike, which will act as crucial support in the September series. 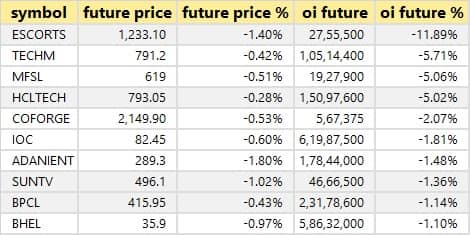 Max India: Rajasthan Global Securities bought 3,83,071 shares in the company at Rs 66.41 per share on the NSE.

Shilpa Medicare: Barclays Merchant Bank Singapore sold 4,93,893 shares in the company at Rs 560.21 per share on the NSE.

Waterbase: KCT Management Services acquired 3,25,000 shares in the company at Rs 105 per share on the BSE.

Infosys: Company is scheduled to meet on October 14 to consider September quarter 2020 earnings.

Mahanagar Gas: Ventura Securities will have a conference call with the company on September 18.

REC: The company to infuse Rs 150 crore as equity in a Joint Venture alongwith Power Finance Corporation, Power Grid Corporation and NTPC, for the purpose of establishment/creation of Common Backend Infrastructure Facility (CBIF) for smart metres in the country.

Ten stocks -- Adani Enterprises, Bank of Baroda, BHEL, Canara Bank, Escorts, Indiabulls Housing Finance, Vodafone Idea, Jindal Steel & Power, Tata Chemicals and Vedanta-- are under the F&O ban for September 16. Securities in the ban period under the F&O segment include companies in which the security has crossed 95 percent of the market-wide position limit.