The cabinet has approved 10 nuclear reactors for power generation for a combined capacity of 7000 MW.

He said the total value of the project sanctioned by the cabinet is Rs 1,05,000 crore and of that, Rs 70,000 crore is for the equipment of the nuclear power plant. The remaining will be for infrastructure and civil works, he said.

Sanctioning of the 10 plants is a very bold decision taken by the government. He said the company is very capable and all geared up to set up the plant without any joint ventures. India does not require outside help to set up these plants, the entire set up can be done by domestic companies, he said. 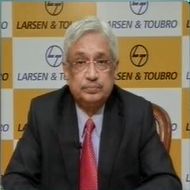 The majority of setting up these plants will likely be with L&T. Both on the civil side and mechanical side there 2-3 players in competition but as far as reactors are concerned majority would be L&T.

Earlier, we were dependent on overseas suppliers for the requirement of forgings but L&T and NPCIL together will manufacture majority of the forgings required for the projects.

Gorakhpur plant in Haryana would be the first one to take off and in next two years most of the plants will be on the anvil and by 2025-28 these plants one–by-one will become operational, said Roy.
TAGS: #Business #L&T Heavy Engineering
first published: May 18, 2017 03:43 pm