If the government is serious about Swachh Bharat, it should appoint a globally acknowledged third party inspection agency like SGS . Let the agency do this work at no cost to the government and instead just collect a percentage of the fines (that were not paid) from defaulting companies.

For the last few years, Indian politicians like to rail and rant against the use of plastic. Some states have even gone to the absurd extent of trying to ban the use of plastic, and then sheepishly bring out an ever expanding list of places where plastic can be used for some more time.

From milk sachets, to disposable syringes to plastic tubes used to feed patients intravenously, the banning of the use of plastic is not easy. Or even desirable.

And this is where Indian lawmakers need to realise that banning is not always the best solution.  They ban things when a ban is not required or desirable.  And they don’t ban things where bans are absolutely imperative.

So let us begin with plastic itself.

2. Myth: Waste segregation by common citizens is compulsory. Most Indian policy makers have possibly been barking up the wrong tree. Almost every municipal corporation has been urging citizens to segregate waste.  Some municipalities have also threatened violators with hefty fines. They point to how segregating waste is a global practice. But they are wrong.  To understand waste management, they should look to Israel instead.  Unlike western countries which try asking their citizens to segregate waste, Israel does not.  They say that most people do not segregate waste properly, forcing the municipal corporation to repeat the process of segregation.  Israel recommends another method which is super-efficient.  For that, one needs to look at what Shafdan, the biggest waste processing centre in Israel, does. It collects all waste and dumps it into a large tank – similar to the ones used for sewage treatment.  They then pour in water and follows this up by swirling the waste using a centrifuges. As the waste swirls in the water and as the speed of circulation increases, the waste segregates itself.  Steel concrete and glass settle at the bottom.  Lighter metals a little higher and so on.  Then using a simple separator, the waste is segregated not into two categories of dry and we, but into several categories.  Whatever can be reused – glass, steel and the like – is sent for recycling.  Whatever has rich biological content and can be decomposed is kept in a separate chamber for decomposition and even creating methane.  The rest is incinerated, and the heat used by industry or for generating electricity. No bans.  No segregation rules of common people.  But waste is managed super-efficiently. The water poured into the waste is sucked out, recycled for use by industry.

3. Myth: Each municipality needs grounds where residual waste can be dumped. Wrong again. Just look at Sweden. It has banned landfills since 2004.  That is where the ban was sensible. It compelled industry and cities to find ways to manage waste without resorting to ugly landfills – in India landfills are also a subtle way of land-grabbing.  What Sweden does is almost the same as what Israel does.  It reuses all that can be used – window frames, glass, steel and the like.  It sends for decomposition all the waste that can generate methane.  And it incinerates the rest of the waste.  Since Sweden is a cold country, the heat is used largely for heating up furnace oil which is pumped through pipes to each household in the cities to keep the houses warm.  In turn, the waste processing plants charge a fee to the municipalities for this service and remain profitable.  So good has Sweden become at waste management, that some of its centres like Tekniska Verken actually import agro and forest waste for Norway and the UK to make money. Will India please follow suit?

4. Myth: India has a well performing Central Pollution Control Board . That is a joke. Just talk to Madhav Gadgil who compiled the impressive report on how the ecologically sensitive region of the Western Ghats is being destroyed.  He will tell you of how he came across instances where polluting industries escaped waste management charges by concealing the waste.  They took the effluent and pumped it underground.  That in turn contaminates the ground water reserves and the entire ecology.  Now if the CPCB were efficient, it would have used the input-output data they have (or are supposed to have) compiled, and start charging industries for waste that has not come out.  The government should introduce a polluter pays policy.  The more hazardous the effluent, the higher must the charges to industry be. If the government is serious about Swachh Bharat, it should appoint a globally acknowledged third party inspection agency like SGS .  Let the agency do this work at no cost to the government and instead just collect a percentage of the fines (that were not paid) from defaulting companies.  You will suddenly find CPCB and its state affiliates working harder.  Ditto with medical waste, where select parties are given the mandate to collect medical waste within 24 hours.  They collect money from doctors, clinics and hospitals for doing this.  But the waste is collected only once a week, in violation of laws that demand that it be collected every day. Only a reliable third party inspection team can help things improve.  The CPCB board and its affiliates are believed to look the other ways if the right amounts are paid.  This is no solution for a Swachh Bharat. Is that why the CPCB website has no data on violators, prosecutions and penalties ?

5. Myth: More garbage collection trucks are needed. Hogwash!!! Yes, India generates a huge amount of waste. Much of it goes untreated, even in cities (see table). But does that need trucks? Just look at the types of vehicles Adar Poonawala of the Serum Institute uses .

Poonawala collects garbage in areas close to Pune and hands it back to the municipal authorities for treatment. Locals will tell you that he does a better job than municipal corporations, and at lower costs. He uses small vehicles that scurry around into every small street and scoop up the garbage at regular intervals throughout the day. These vehicles then periodically empty their pile of garbage into a much large vehicle parked nearby. No big vehicles lumbering around.  No excuses for not touching some streets because they are too narrow.  If only municipalities also gave private parties to process and manage waste, though would be much better.  But the waste mafia does not allow that.  Municipalities and affiliates of the CPCB look the other way. 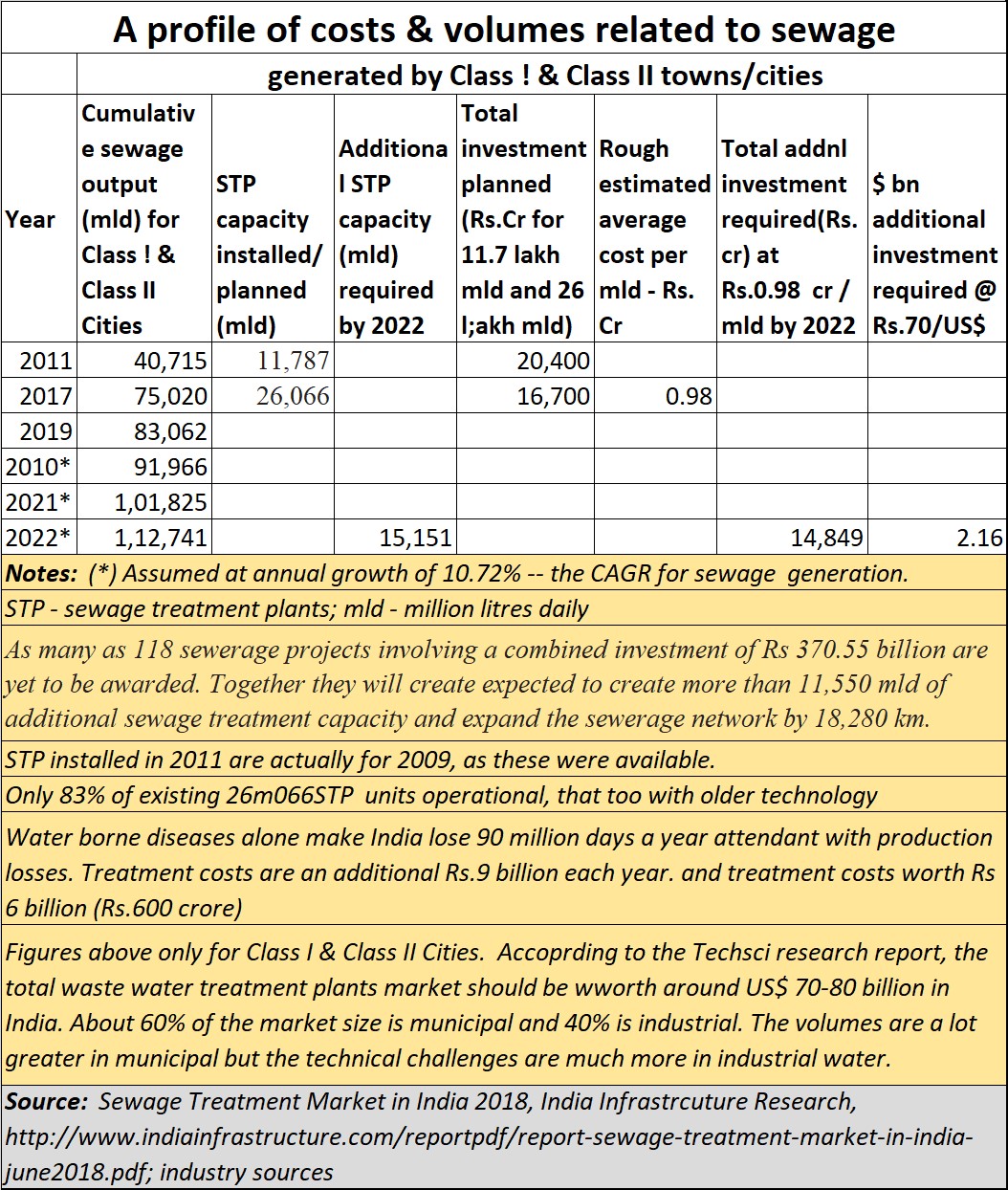 What this means is that someone is trying to fool the people, and even the PMO, that measures to manage waste are indeed being taken.  Each agency tries to find excuses to get more3 money to buy trick for buying bins into which wate that has been segregated can be put.  But there is no holistic planning.

One only hopes that India’s policymakers will actually take waste management a bit more seriously.