India has the right talk but not the right action

India has the ability of wiping out its balance of payments, making India cleaner, making Indians healthier if only it adopts rooftop solar and waste management effectively.

The government takes a marvellous stance when it comes to cutting greenhouse gas (GHG) emissions. Ostensibly, all the right strategies are in place. The schemes of Swachh Bharat and  Pradhan Mantri Ujjwala Yojana (PMUY) are already in place. The first is aimed at removing all garbage, open defecation and curbing pollution of any kind. The second is aimed at providing free cooking gas (LPG) connections to the poor. The first is an ongoing project.  The second boasts of over 6.31 crore connections having been provided since the launch of the scheme on May 1, 2016.

Both together hope to improve the health of people in the country.  The first, by reducing the exposure of people to filth and disease while the second, by weaning people away from burning coal or firewood (the latter causes deforestation).  The fumes from the firewood and coal cause respiratory ailments.  In fact, according to Economic Survey 2016-17 Volume 2, respiratory ailments alone are believed to be responsible for 115,000 deaths and a cost of US$ 4.6 billion each year.

But when one looks at hard numbers, there is a growing sense of discomfort.  They show that India’s CO2 emissions grew by an estimated 4.6% in 2017.   This was despite a downturn in the economy. Measured per person, India's emissions are still very low – at only 1.8 tonnes of CO2 per capita – which is much lower than the world average of 4.2 tonnes. But collectively, they are way too high. What is noteworthy is that these emissions can actually be controlled yet make India that much more prosperous and healthy. 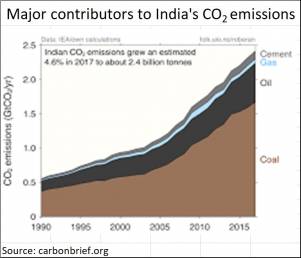 As one website puts it, “carbon footprint (CF) refers to the total amount of carbon dioxide and its equivalents emitted due to various anthropogenic activities. Carbon emission and sequestration inventories have been reviewed sector-wise for all federal states in India to identify the sectors and regions responsible for carbon imbalances. This would help in implementing appropriate climate change mitigation and management strategies at disaggregated levels. Major sectors of carbon emissions in India are through electricity generation,  transport, domestic energy consumption, industries and agriculture. A majority of carbon storage occurs in forest biomass and soil. This paper focuses on the state-wise carbon emissions (CO2, CO and CH4), using region specific emission factors and state-wise carbon sequestration capacity. The estimate shows that CO2, CO and CH4 emissions from India are 965.9, 22.5 and 16.9 Tg per year, respectively.”

Then when one looks at India, one realises that electricity generation alone contributes 35.5% of total CO2 emission, which is followed by the contribution from transport.  Vehicular transport exclusively contributes 25.5% of total emission (see chart).

There is a solution for emissions from power generation.  It is a solution that could transform India completely.  It is through rooftop solar that the government could create as many as 80 million jobs . Ideally, the government should have gone all out to push rooftop solar.  But as the table alongside shows the government has missed its targets . The analysis shows that Maharashtra emits higher CO2, followed by Andhra Pradesh, Uttar Pradesh, Gujarat, Tamil Nadu and West Bengal.

If India is serious about improving the health of its people and at the same time reducing GHG, it must adopt rooftop solar on an emergency basis.  The costs involved in rooftop solar can be lower than the cost of providing grid connectivity.  This is what Tripura showed to a disbelieving Union power ministry just a year ago. It set up 50,000 rooftop solar units in the hills at a cost of Rs.50,000 each .  Grid connectivity would have cost Rs.2 lakh or more per household.

Moreover, rooftop solar has three other major advantages.  First, the time taken to set it up is extremely little.  Second, power through solar is more reliable than power through the grid.  Third, there are no subsequent bills, so no need for recurrent subsidies which have bankrupted many state owned discoms in India.  Two other advantages are that it is a cleaner source of electricity, and survives without the greasy palm of grid engineers being shown to households.

The second aspect is managing waste.  There have been countless instances where the bureaucracy has misled the legislature about controlling waste management.  Yes, toilets have been built, but effluents are allowed to contaminate ground water and the waters of rivers.  People often forget that it is easier and cheaper to prevent effluents from flowing into rivers than asking engineers to clean up the polluted water over and over again, day after day

Bureaucrats also mislead legislators about controlling effluents, when actually the instances of zero discharge of industrial effluents are few and far between .

India has the ability of wiping out its balance of payments, making India cleaner, making Indians healthier if only it adopts rooftop solar and waste management effectively.  India’s potential for methane is immense .   Together, both could make India achieve its $5 trillion target sooner than most people imagine.  Without them, India could continue to limp along.