Meme Marketing 2023: How memes become weapons of virality in a brand's marketing arsenal

With social media roles requiring meme creation as a necessary skill and with the growth of meme marketing agencies, can memes become a key mode of marketing communication for brands?

By  Aashrey Baliga| Dec 26, 2022 1:50 AM
Meme marketing, is an increasingly popular category that brands have begun to focus more on in the last couple of years as a result of the forced digitization due to the pandemic. In India, the number of internet users grew substantially during the lockdown. With nothing to do other than consume tons of content, memes gained immense traction and became a dependable source for marketing. (Representational image by Justin Lim via Unsplash)

Memes are just as much a part of our lives today as lunch and dinner. They’re a source of witty, fun and relatable content and have taken over the internet. Everything can be turned into a viral meme today, a funny facial expression to elaborate hand gestures to famous dialogues from public speeches, TV shows and movies. There really is a meme hidden everywhere. Every social media platform offers thousands of memes to browse through, created by netizens familiar with pop culture. Hence, it should come as no surprise that even brands adopt creation of memes as a useful tactic to market their products and services.

Meme marketing, as it is known, is an increasingly popular category that brands have begun to focus more on in the last couple of years as a result of the forced digitization due to the pandemic. In India, the number of internet users grew substantially during the lockdown. With nothing to do other than consume tons of content, memes gained immense traction and became a dependable source for marketing.

Brands began directing more of their marketing budgets towards meme marketing rather than just elaborate brand campaigns. Brand campaigns are expensive and time consuming. It also involves extensive thought and deliberation before being finally rolled out. Thus, memes prove to be a much more cost effective, irreverent, quick and relatable means for brands to connect with the target audience particularly the young social media savvy millennials and Gen Z. Moreover, the ability to create memes has found itself a permanent position in social media related job descriptions. Fintech unicorn, Slice even has a position called ‘Chief Meme Officer.’ 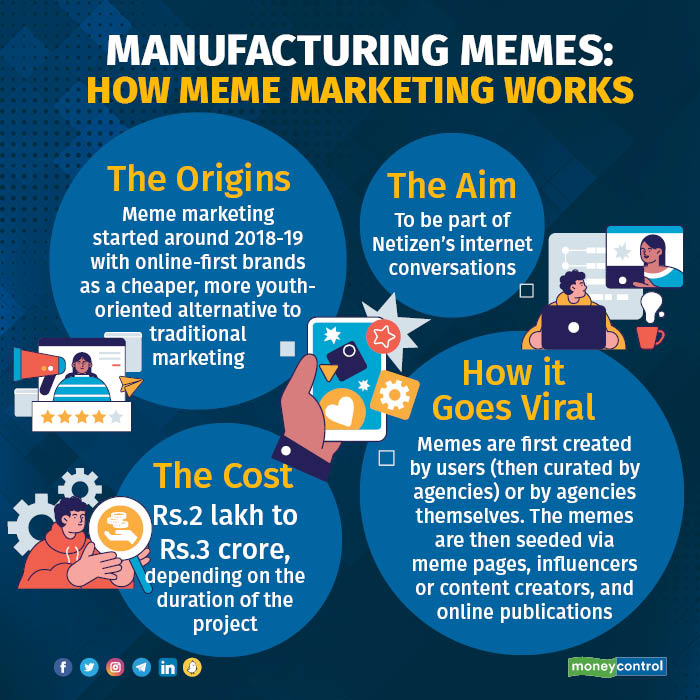 In a previous interview with Storyboard18, Aditya Sobti, creative lead at Schbang said, “That (memes) is the language that Netizens understand. People don’t want to be preached to. Memes subtly integrate brand messaging into conversation.”

Virality is one of the KPI’s (key performance indicators) that brands look for and memes are a great way of achieving this quickly and successfully.

Read more: Engineering the viral: The science behind meme marketing

Food delivery brands Zomato and Swiggy are known for their amazing social media presence strengthened by memes based on movies, shows and pop culture. They’re also known to have started the meme marketing trend in India. Many brands have followed suit since. Dunzo, Tinder, Zepto and Voot are some of the other brands that have created new and versions of some of the best memes in the last year. 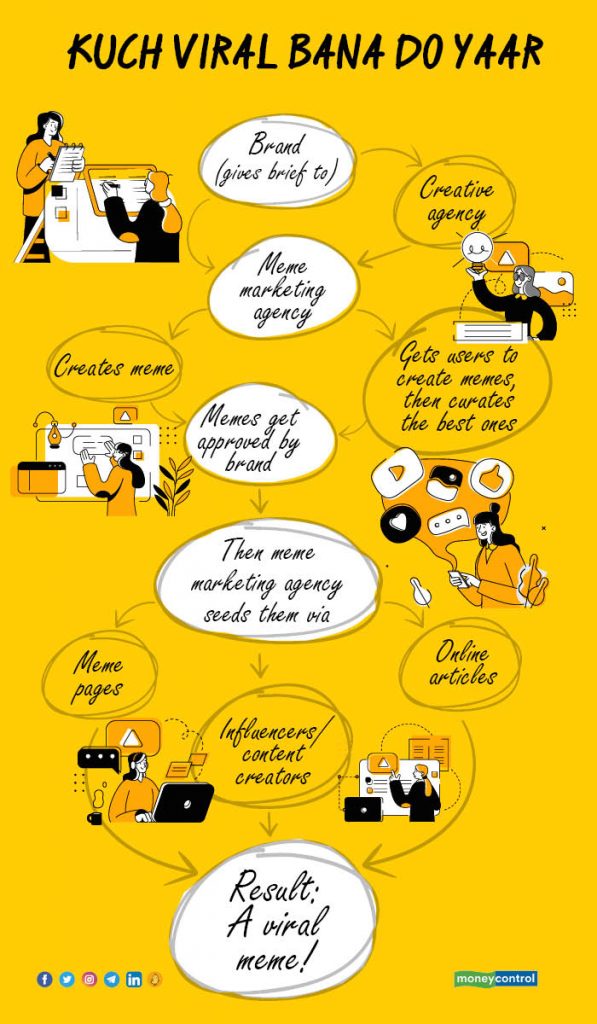 Some time ago, an image surfaced on the internet of a man on a horse wearing the Swiggy delivery bag. Netizens around the world were amazed to see someone using a horse to deliver food. This photo became viral in no time with hundreds of memes being created on the topic. Swiggy disclosed that the man wasn’t an employee of the company and that they had nothing to do with it. However, they couldn’t miss the chance to capitalize on this opportunity. They immediately changed their icon of a man on a bike on the delivery tracking page to a man on a horse.

In inner circles however, this was termed as an exceptionally well executed marketing campaign. The biggest reason being that changes to an app normally take weeks to execute and Swiggy managed to make changes in a few hours itself.

Recently, meme marketing agency, Youngun released a campaign on Twitter that went completely viral. Despite many cursory glances, you wouldn’t be able to decipher that this is actually a marketing campaign. A girl named Harshita on Twitter, asked her followers to edit out a man accidentally photo-bombing her picture at fast food joint, Subway. Her followers obliged by getting rid of the man but replaced him with other interesting, funny characters. Thus, turning the photo into a meme. This was a unique way adopted by Subway’s marketing team, and well executed by Youngun. A unique way that introduced Subway to the world of memes. Youngun also services clients such as Netflix, PepsiCo, Swiggy and Cred.

Budget 2023: What did you think of the Union Budget 2023 presented by FM Nirmala Sitharaman?

Budget 2023: Retail sector to benefit from push towards local manufacturing

Budget 2023 is for the aam aadmi but will it spur consumption?