Machine-made biryani is here! How startup food brands are adding robotics to menus

Restaurants, cloud kitchens and corporate offices are increasingly relying on machines to prepare food so that it’s faster, cheaper and removes human dependency, among other benefits. A few Indian startups like Mukunda Foods, Xook and On2Cook are trying to build the so-called food-as-a-service (FaaS) business by adding robotics to the kitchen menu. These machines guarantee to prepare food faster with consistency without or minimal human labour.

By  Sanghamitra Kar | Moneycontrol| Dec 8, 2022 2:52 PM
In the next few years, these kinds of machines would possibly be seen in households as well. For instance, Up, stylised as Up⤴, a consumer hardware startup founded by Mahek Mody and Mohit Sharma, has piloted a machine that can help prepare food with minimal fuss and in double-quick time. The device, called delishUp and comes with an app, and it can chop, stir and generally prepare food faster.(Representative image via Unsplash)

The last biryani that you ordered in was perhaps made by a machine and not a cook. Shocked? Don’t be.

Most cloud kitchens and restaurant chains are increasingly relying on machines to prepare the food, rather than human labour. Take the case of Dunkel Kitchen, a cloud kitchen chain in Bengaluru. Owner Karthikeyan Selvaraj claims automation has helped him overcome a big problem.

“Relying on labour is a major pain in this industry because they very often move out in a span of a few months. And that obviously cannot be an excuse for a quality dip or a bad experience for my customers. Food needs to be consistent and on point every single time,” he said.

To solve this, he invested Rs 2.5 lakh in a bought a wokie—primarily a machine to make chinese and other other dishes of different cuisines with basic machine operators.

If you have ordered tea from Chai Point, did you notice it always tastes the same? That’s because it’s always brewed by a system that follows instructions stored on the cloud, built by the startup, unlike your next-door tea stall owner who has help on hand to make it each time. The tea chain is actually even planning to go public after its new bet on these brewing systems.

“With these Android-based machines, we will expand. All of these machines will have their preventive maintenance, supply chain issues, warehouses etc addressed as we partner with other outlets, offices and so on in other cities,” said Amuleek Singh Bijral, co-founder and CEO of Chai Point.

He added that these machines allow anyone to open a store. “All that needs to be done is load the machine with ingredients before brewing.”

One machine can brew 500 cups a day. The firm has so far installed 5,000 machines across 19 cities in the country through its business-to-business-to-consumer (B2B2C) channel.

Restaurants, cloud kitchens and corporate offices are increasingly relying on machines to prepare food so that it’s faster, cheaper and removes human dependency, among other benefits. A few Indian startups like Mukunda Foods, Xook and On2Cook are trying to build the so-called food-as-a-service (FaaS) business by adding robotics to the kitchen menu. These machines guarantee to prepare food faster with consistency without or minimal human labour.

This market, which did not exist a decade back, started gaining traction after the boom of online food delivery and cloud kitchens. But it didn’t come on a platter.

“It was not a demand then, it was a challenge,” said Eshwar K Vikas who co-founded Mukunda Foods, and has been building such machines since 2014. Today, the startup sells around 5,000 of such machines to restaurants and cloud kitchens in a year, which can cost anywhere from Rs 40,000 to Rs 2 lakh each.

“Around 2016-2017, food ordering at home was picking up with players like TinyOwl, Foodpanda and Ola Foods (which were among the early entrants) creating the demand. Many then figured that expanding this business was not really tough, because they didn’t have to worry about demand generation. So expansion was the next goal. That’s when the problem started,” said Vikas.

Restaurants started facing problems such as inconsistent quality and a drop in operational efficiencies. “The answer was automation,” added Vikas. Later with Zomato and Swiggy entering the food delivery space, the demand had also significantly shot up.

Vikas said he started talking to restaurant owners to solve this problem. At the moment, his machines can prepare dosas to biryanis to burgers and smorgasbord of dishes in between, in a fraction of the time usually taken.

Starting off from a basement in Bommanahalli, a southern suburb of Bengaluru, Vikas’ business is today housed in a 20,000 sq ft manufacturing facility that churns out machines capable of dishing out food from large swathes of the world, which is useful given that 10 percent of sales are overseas.

Another company, Xook which started in 2020 is aiming to build a full-stack robotics kitchen, explains co-founder Raj Natarajan. The startup has piloted the machines in India targeting corporate offices, housing societies and co-working spaces, and is now launching in the US by partnering with restaurants, hospitals and corporates.

“We want to make food accessible like coffee. Be it in an office or a hospital, you get fresh coffee all day, we want to do this for food,” said Natarajan.

Xook plans to succeed in one market and then scale it to other markets. The two-year-old business is in the process of deploying machines across the US market after raising its pre-seed funding of around $1.3 million.

Meanwhile, early-stage startup On2Cook has started building a ‘unified’ device that adds the functions of a gas stove, microwave and induction stove into one gadget and saves energy, reduces cooking time with its internet-of-things capabilities.

On2Cook plans to sell 3,000 of these devices by next April at a cost of around $500 each in geographies like Dubai, UK and US. It will be priced lower in India.

How do the machines work? 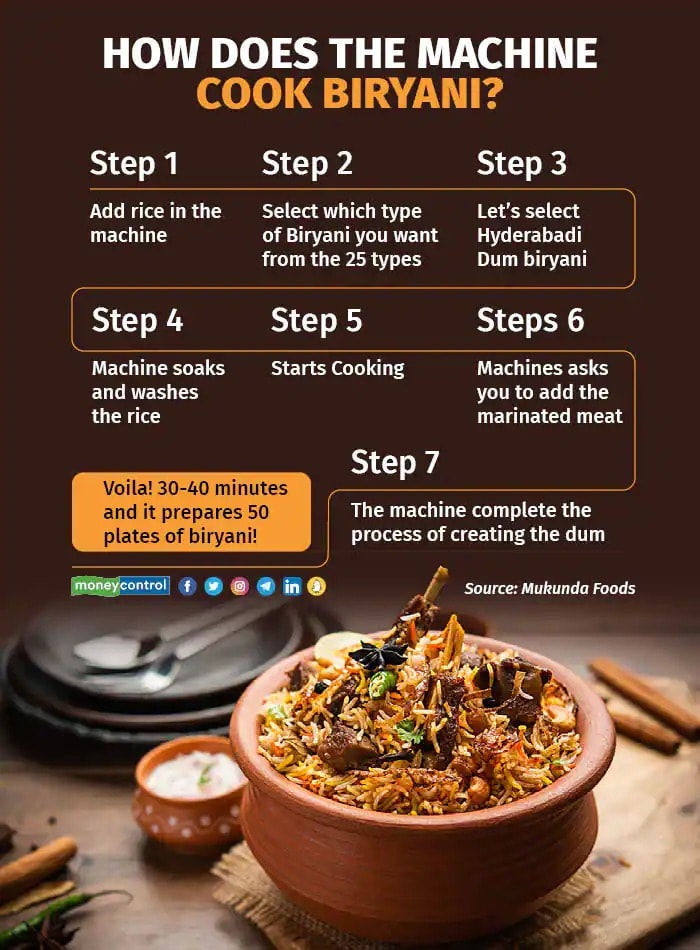 Typically, the operator feeds the recipe and instructions into the machine which include temperature, time and ingredients, and once it’s done, the machine starts to prepare the meal based on these inputs, with no manual intervention.

The real challenge kicks in when it comes to worldwide fare. Xook, has started off with six cuisines so far, including savoury Indian chats, Chinese favourites, pasta and other Mediterranean items and is now bringing in meal bowls.

Tackling different kinds of cuisines he says, “All boils down to the ingredients, heating, sorting, frying for any kind of bowl dish. So, we have built a versatile solution to handle the different ingredients.”

In the next few years, these kinds of machines would possibly be seen in households as well. For instance, Up, stylised as Up⤴, a consumer hardware startup founded by Mahek Mody and Mohit Sharma, has piloted a machine that can help prepare food with minimal fuss and in double-quick time. The device, called delishUp and comes with an app, and it can chop, stir and generally prepare food faster.

“The product has a touchscreen through which one can instruct the machine to cook the recipe. Be it India, Chinese, cookies, the machine currently can prepare 160 recipes and three are added every week. One can also save or record recipes in the device and also share it with others who use the product, which will be connected with the web world,” explained Mody.

His startup has already found backing from early Tesla investor Tim Draper and Zerodha’s Nikhil Kamath, among others.

Mody believes that while digitisation has taken over globally and India too, kitchens are still behind the curve, and they aim to solve that.

Democratising post-production: The future of the creator economy

How brands made a splash with movie associations

Pathaan in Ads: A timeline of Shah Rukh Khan and Indian advertising

Simply Speaking: Aping trends is wannabe. It is not what great brands do