Engineering the viral: The science behind meme marketing

Can viral memes be manufactured? Meme marketing companies would certainly say yes to that question.

By  Anjali Venugopalan| Aug 11, 2022 8:53 AM
Reality TV show Shark Tank gave us some of the most famous memes in India in 2022. This one features entrepreneur Ashneer Grover who founded BharatPe. (Image source: News18)

Meme marketing is becoming the latest tool in companies’ digital marketing arsenal. More companies are devoting a bigger portion of their budget than ever before towards meme marketing, and specialised companies are stepping in to help them go viral.

But why memes? “That is the language that Netizens understand. People don’t want to be preached to. Memes subtly integrate brand messaging into conversation,” says Aditya Sobti, creative lead at Schbang, a creative and digital transformation agency. “Customers don’t know their time has been taken (by a brand).”

Take the case of the recent trailer for the movie Brahmastra, starring Ranbir Kapoor, Alia Bhatt and Amitabh Bachchan, among others. A dialogue said by Kapoor’s character Shiva in the trailer – ‘Kuch rishta hai mera aag se (I have a strange connection with fire)’ – quickly became a meme. Several brands like Tinder, Dunzo, Zepto and Voot were quick to catch on, and posted their own variations of the meme.

“Memes are a part of our day-to-day lives,” says Saksham Jadon, founder of Youngun, a meme marketing agency that was started in 2019. “And brands want to be part of internet conversations.”

Youngun handles clients such as Netflix, PepsiCo, Swiggy and Cred.

A short history of meme marketing

According to Sobti from Schbang, the meme marketing trend in India was started around 2018 by brands like Zomato and Swiggy, both of which are in the food-delivery space.

Many startups typically didn’t have much money to spend on recurring campaigns that are heavy on print ads and TV commercials, which are typically expensive.

Instead, they relied on a more irreverent – and practically free – marketing style which involves catching on to the latest trending topics online and putting the brand’s spin on it. And this often involved memes.

An analysis of Google Trends indicates that the search term ‘meme’ had been slowly gaining in popularity in India since around 2013. When compared to the worldwide trend, growth in India was slow.

The real spike happened during the pandemic-induced lockdowns in March 2020, when millions of people all across the world were stuck at home, with little other than their phones and laptops in the way of entertainment. While worldwide interest in memes grew at that time, India’s growth was much faster, and stabilised at about 75% of those levels since then.

Startups and their marketing teams were quick to catch on. The ability to make memes is even a part of the job description for a social media role at a startup. Fintech unicorn Slice even has a ‘Chief Meme Officer’.

The method to the viral madness

Brands that don’t have their own meme makers go to agencies like Jadon. “We’ve cracked how to make it so organic that even news publishers will pick it up. We make sure it’s worth people’s time.”

For instance, Youngun handled the meme marketing for the recent ‘Ranveer vs Wild with Bear Grylls’ web episode, featuring actor Ranveer Singh. The trailer sparked a meme fest, and ended up getting covered by several news outlets.

Brands are also exploring user-generated memes, but with a caveat.

Meme Chat, a meme community social media app started in 2019, enables brands to take this route. Kyle Fernandes, 24-year-old co-founder and CEO of Meme Chat, explains how the process works, “A brand sponsors a meme template. Our users generate thousands of memes, which are curated by moderators. The best ones are shows to the brand. If a user’s meme gets selected by the brand, they get paid Rs.5-10.”

The chosen memes are propagated across meme pages on Facebook and Instagram. Meme Chat said it owns 100 meme pages with a total following of 60mn and has tie-ups with another 300 that have a following of 540mn, meaning it can tap a collective following of 600mn. 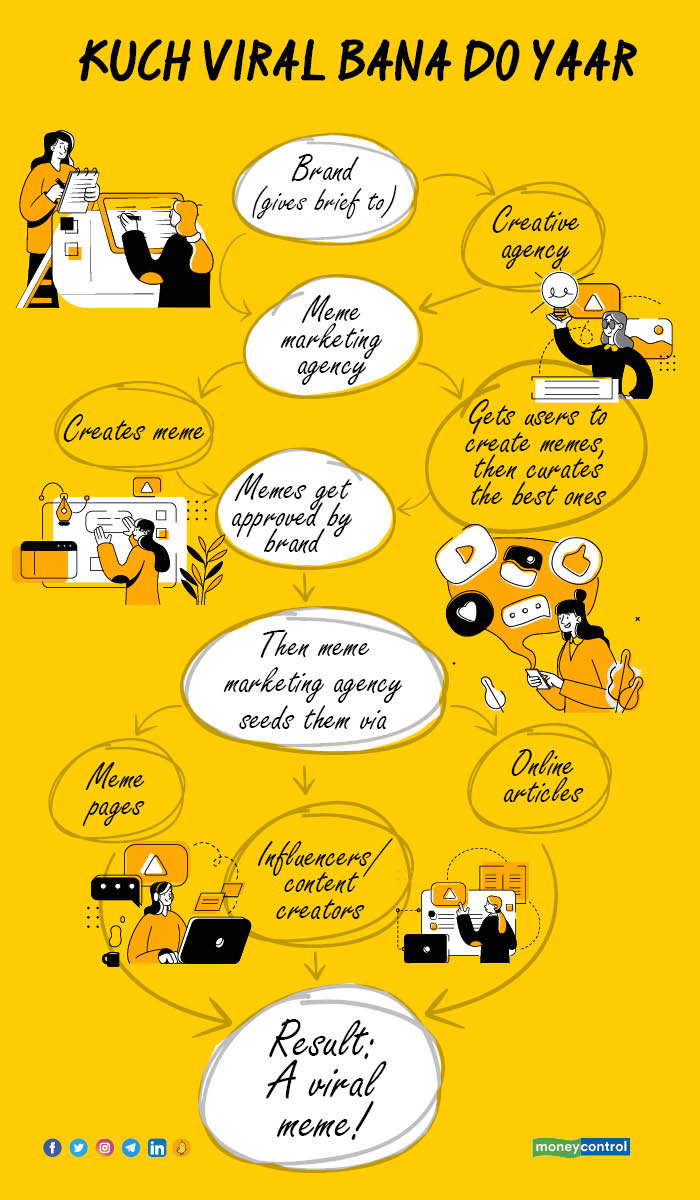 Meme Chat has done campaigns for companies such as Britannia, Moj (owned by ShareChat) and films like Jugjugg Jeeyo. Last year, the company raised $1mn in a funding round led by BeeNext, a Singapore-based venture capital firm.

OTT platforms are the biggest clients for meme marketing agencies, followed by e-commerce and digital startups.

Sometimes, memes can also be "seeded" via influencers and content creators – they either repost these memes, or make their own versions of them. And when multiple brands are handled by a single agency, the agencies ensure the brands end up participating in each other's meme trends online, seemingly organically.

Larger, more traditional companies are slow to the uptake, says Sobti. Lawsuits arising from copyright infringement are the main concern, even though lawsuits like these are rare.

Way back in 2015, Getty Images asked GetDigital, a German blog, to pay licensing fees for using a picture of a penguin from their image database to create what would become a widely popular meme called ‘Socially Awkward Penguin’.Getty said they were trying to protect the livelihoods of photographers who click such photos. GetDigital was also asked to keep quiet about it. They didn’t.

In a later report by Huffpost, Getty said they had pursued similar action against several such blogs who used images in this manner.

“Companies like Jio and Britannia have a lot to lose,” says Sobti. “It’s been tough to convince them, (but) slowly and steadily, brands are warming up to the opportunity – they know they will lose out on social media reach otherwise.”

Britannia recently launched a meme campaign for the launch of a new biscuit. The campaign was managed by Schbang and Meme Chat.

Meme marketing companies can change anywhere between Rs.2 lakh to Rs.3 crore, depending on the duration of the project.

“We see very good engagement for memes versus other posts. Users are able to relate to it – it doesn’t seem like advertising,” says Khanor. Video memes are now becoming more popular versus static ones, says Khanor.

What constitutes virality? It depends on who you ask. Fernandes says that it would have to be about 10 million in reach and engagement numbers would constitute virality. Jadon says that it’s viral when news publishers organically pick up stories on memes, or the meme makes it to the meme review video of an influencer like Tanmay Bhat.

But sometimes, it’s hard to tell what’s organic and what’s not.

For instance, a recent meme that went viral was a screenshot of a WhatsApp conversation between a college student and his dad. Storyboard18 spoke to the original poster of the meme, 23-year-old engineering student Jitu Malani from Ajmer. Malani, who posts memes on his Twitter page, said he had no idea that this screenshot would go viral. Malani said he was approached by a few news outlets after the meme went viral, although not by the brand itself.

While the meme appears not to have been posted by the brand, the story was picked up by several news organisations. Jadon put up a LinkedIn post with screenshots of the coverage, with the caption ‘Remember this viral meme? Work by Youngun – a Meme Marketing agency for Swiggy’.

Similarly, yet another viral post by Swiggy shows signs of the blurring lines between brand-led and organic viral content.

In this case, it was a video of a man on a horse carrying a Swiggy delivery box. Three days later, the brand put out a tongue-in-cheek notice saying it had taken note of the viral video, and announced a reward for whoever identified the horseman. The day after that, the app’s delivery status section had a modification which showed a man on a horse, instead of the usual bike.

A week after the meme went viral, the company put out another letter, saying it had identified the horseman, as well as the person who shot the video.

Sobti says that, typically, changes to an app take weeks to plan and execute. He added that this particular meme was considered a well-executed campaign in marketing circles because of how organic it looked.

In response to questions about the story, Swiggy sent links to the notices it posted on its official Instagram page (described above).

Sobti says there’s no harm in marketers trying their best to make memes look as organic as they can.

The audience has a few laughs, and the brand wins too. What Indians think about EV adoption, cryptocurrency and health insurance

New media age: Marketers should invest in users and not in platforms

NFT is not just the marketer’s shiny new toy; Gaming and esports show the way

SEBI guidelines and financial influencers: Do ‘finfluencers’ and their content need regulations?