Bookstrapping: The Ambuja Story - How a Group of Ordinary Men Created an Extraordinary Company

A highly decorated biography, this book also features testimonials from India’s stalwarts. The man and the book have both cemented their presence. Bookstrapping rating: 3.5.

Learn from anyone, anywhere, anytime.

The Ambuja Story is a book written by an industrialist whose memory is sharp as a tack. The detailing of episodes and anecdotes is astoundingly vivid! The book is a window to a lively mind and a resilient life, lived with a glass of fine whiskey. And it is really funny in parts; for instance, Narotam Sekhsaria’s grandfather was one of the donors to the school that he attended. So gran used an arbitrary age criterion to enroll him at the age of 5 in class 5! What a shortcut!

Perhaps this is one of the ‘earthiest’ books you will read. Let me explain - there is a ‘son of the soil’ flavour that is peppered all over the book.

Tradition is upheld not for its own sake, but for the purpose it serves. Five big examples:

1. Sekhsaria’s schooling was at The Marwari Vidyalaya High School, and their strong suit was not academics. He says, “The parents who sent their kids to the school did not insist on it and the school did not offer it either! The idea was to get kids out of school as soon as possible so that they could join the family business.”

2. He applied his Baniya Buddhi (traders' mindset) to good use and reiterates the Marwadi community’s unique talent for trading and business, cultivated and put to use assiduously over a century. He applied it early, when as an student at Mumbai’s UDCT, he had no interest in chemical engineering but instead focused on learning the ‘engineer’s mindset’ - how to examine a problem from various angles before arriving at a solution.

3. He never wrote the IIT entrance exam - because his father would've been mortified at the idea of him staying away from home and on campus. When friends went abroad, he didn't want to because, again, his ‘parents would have been shattered.’ But what he adds later is a thing of beauty - “I never felt any resentment towards my parents and my sense of duty towards them was unconditional.” Okay, I want every teenager to pick up this book now!

4. The book is laced with happy coincidences. His chance meetings with Mr. N.N. Pai, the chairman of IDBI, at the Clarks Hotel Lucknow who suggested to him that he must start his cement venture in Gujarat instead of Uttar Pradesh. Or, when Kantisen Shroff of Excel Industries came to meet him to explain the role of a social conscience - add to the credibility of the stories.

5. Originally a successful cotton trader, Sekhsaria admits that midway, he sensed a void in his life. 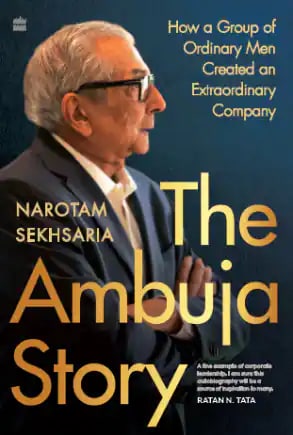 He says, “Traders, however successful, were classified with brokers and middlemen or low level commission agents. They were never seen as wealth or asset creators; this was an honour reserved for industrialists…I longed for that kind of respect.”

These are sentences that shake you up; there’s another one that mentions the 1980s as the time when ‘the industrial revolution took shape in Gujarat under Mr. H K Khan, an industrial development minded bureaucrat’. What a fine acknowledgement of a name that might've otherwise been lost in the pages of history.

The book has an entire chapter dedicated to the environment; this is unusual because this work happened in the '90s, when sustainability was not so fashionable or imperative. Whether it was the afforestation of the Ambuja’s Kodinar factory or repairing dams across the region or beating back saltwater intrusion, Sekhsaria ‘listened’ to good advice anywhere, anytime and from anyone.

There is a chapter in which he talks about taking inspiration from the pharmaceuticals industry and how their medical representatives go around, imploring doctors to prescribe their medicines. He applied this to cement distribution and reaped rich rewards. Needless to add, this is a highly decorated biography; it features testimonials from India’s stalwarts; Ratan Tata, Anand Mahindra, Deepak Parekh, Kumar Mangalam Birla, Uday Kotak and Kishore Biyani to name a few. The man and the book have both cemented their presence.