Sleep India Sleep is a nationwide movement that hunts for a Sleep Champion. Find out how it works and how it worked for Wakefit.

By  Saumya Tewari| Oct 18, 2022 9:24 AM
Wakefit and Spring Marketing Capital started Sleep India Sleep, a nationwide movement that hunts for a Sleep Champion who will be offered a prize of Rs10 lakh for an exceptional talent in sleeping.

“Why should we choose you? Wakefit” and “Wakefit 10 lakh job” are some of the keywords that dominate the Google search panel each time direct-to-consumer and sleep solutions company Wakefit launches its 'Sleep Internship' campaign. This is the kind of performance marketing that every brand aims to achieve by spending massive marketing money. Wakefit, on the other hand, seems to have managed to garner attention of netizens organically through its unique campaign series called Wakefit Sleep Internship or what is popularly known as Sleep Internship.

Started in 2019, Wakefit Sleep Internship is a nationwide movement that hunts for a Sleep Champion, who will be offered a prize of Rs10 lakhs for an exceptional talent in sleeping. The battle usually starts at a city level, after which shortlisted participants will win prizes and be chosen to represent their respective states in a national sleep face-off. Genesis of the campaign

Arun Iyer, founder and creative partner, Spring Marketing Capital, recalls starting to work with Wakefit back in January 2019 where it was decided that the company should position itself as a sleep solutions firm instead of a mere online mattress company. Iyer says during that time sleeping less was a part of the hustle culture and something people wore as a badge of honour until pandemic hit when sound sleep became a luxury.

“The brand strategy became to bring back sleep in the consciousness and conversation of consumers and that became the mission of the company. Our branded content head Sandeep Balan came up with the idea of running a contest where we hire interns and pay them to sleep. Their sleep can be monitored to see what happens when they sleep well for over 100 days for 8-9 hours, that was the genesis of the campaign,” he explains.

The idea was to ensure that Wakefit should pop up over the internet or otherwise whenever there is a mention of sleep.

This was especially relevant for India which remains one of the most sleep deprived countries. According to a LocalCircles survey, 1 in 2 Indians reported getting less than 6 hours of uninterrupted sleep each night.

As soon as the first edition of the Sleep Internship went live in 2020, it gained enormous traction with multiple news outlets covering it. This led to a massive interest in the property and the first season witnessed over 1.7 lakh entries from 30 countries followed by a successful second year edition where 5.5 lakh people applied for the internship. 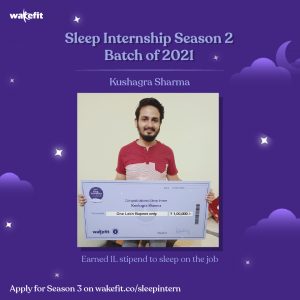 Two seasons down, and the third edition just announced with a prize money of Rs 10 lakh, Wakefit is now synonymous with all things sleep. This aligns well with the company’s goal of becoming a sleep solutions company.

“Sleep Internship has been the most important thing that has happened to Wakefit in improving its overall brand health. In the last three years, whenever we have announced the registrations to be opened for sleep internships, we have witnessed a massive jump in interest in the brand,” says Prateek Malpani, head of brand marketing, Wakefit.

Malpani shares data points. “In the last three years, whenever we have announced the registrations to be opened for sleep internship, we have witnessed massive jump in interest in the brand. The direct traffic to our website goes up by 100-150 percent. The number of people searching for Wakefit on Google goes up by 150 percent,” he notes.

Malpani says consumers are also searching “Why should we choose you? Question of the Sleep Internship form as well.

The entries are coming from the top cities of India including Mumbai, Delhi-NCR, Pune, Bangalore, Hyderabad, Chennai and Kolkata. Till date, there have been more than one million unique visitors who have visited the sleep internship page.

“We are witnessing at an average of 30-35 percent of converts. That’s a huge number,” he adds. It manufactures its products in-house at factories in Bengaluru, Jodhpur, and Delhi. It sells across the country through its own online portal, popular online marketplaces, and also across its 10 retail stores.

This time, the company is also providing Sleep Internship participants with an exclusive discount code to buy products.

“We are witnessing a lot of redeems from it,” says Malpani.

The company aims to convert people who have only bought a mattress or a sleep accessory from the company and direct them to other product categories on its platform.

“We are also making efforts in positioning Wakefit as a complete home solutions company. Whether it is us launching factory video or Ikea ad. We have converted our buyers into buying more home products from us,” Malpani adds.

“I like the way they have built the whole series with a bit of playfulness. Some research by AIIMS does indicate that children in India are sleeping less than needed. With work from home becoming the practice, sleep deprivation is real. For Wakefit, sleep is a nice strategic angle to take,” says Naresh Gupta, co-founder and chief strategy officer of Bang In The Middle. Bang In The Middle recently worked on a campaign for ResMed called #AwakenYourBest featuring Indian rapper Baba Sehgal. It is a campaign aimed at creating awareness about sleeping disorders like sleep apnea and sleeping well.

Gupta emphasises that there is a whole culture around wanting to sleep less. "I hope this is inspiring many of us to sleep,” he quips.