Bookstrapping: The Man Who Bent Light by Narinder Singh Kapany

The fusion of ‘science as a universal need’ and ‘religion as a universal truth but private practice’ emerges beautifully from this book. Bookstrapping Rating: 3.5 stars

By  Reeta Ramamurthy Gupta| Jul 9, 2022 11:19 AM
Narinder Singh Kapany (1927-2020) wrote about successfully transmitting high-quality images through a bundle of optical fibres in a 1960 edition of 'Scientific American'. (Representational image: Compare Fibre via Unsplash)

After the inspiring story of Jagadish Chandra Bose last week, here's the review of ‘The Man Who Bent Light’, about another great scientist from India. 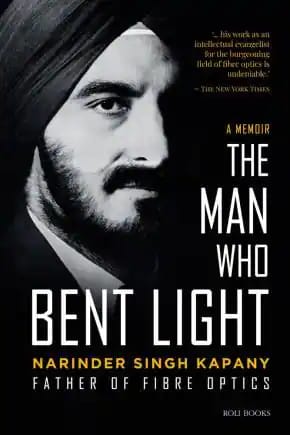 Narinder Singh Kapany (1927-2020) is referred to as the ‘father of fibre optics’. He introduced the term in a 1960 article in the Scientific American, after becoming the first person to successfully transmit high-quality images through a bundle of optical fibres. In the year 1999, Fortune magazine called Dr Kapany one of the seven unsung heroes of the 20th century!

What makes Kapany’s work unique are the massive applications of fibre optics; including communications, lasers, biomedical instrumentation, solar energy etc. He says, “When I was a high school student at Dehradun, at the beautiful foothills of the Himalayas, it occurred to me that light need not travel in a straight line, that it could be bent.”

There is a romance to the writing that makes it very unlike a top scientist’s biography. “Seated at my desk, I am of the temple,” he says, referring to the Golden Temple and gives us a view of his religious soul. Kapany’s love for classical music, sculpture and his wife Satinder, seem to explain how he lived a fulfilling 94 years!

Our learnings from the book are as exotic as this multi-talented genius.

1. As a young student in India, Kapany confesses to being sleepy in class; awaiting something that would awaken him. And the first thing that did so was classical dance! Yet, when his Professor said, ‘Light can only travel in a straight line’, it filled him with unease. Finally this unease became the illumination with which he awoke and became obsessed about science.

3. Whoever you are, your time, and your history can not escape you! Imagine being 20 years old, at the time of India’s partition in 1947 with millions migrating, and more than a million dead! “For what?” Kapany asks. “My primary complaint with the British during my days in 1940s India was exemplified by their drawing of national borders that defined the new India…. seemingly arbitrary, demonstrating little sensitivity to or understanding of the culture that was affected,” he shares. He also witnessed the murder of a boy by a single British soldier, which affected him deeply.

4. Thinking on your feet is always a saviour. There is a lovely episode when as a student at a Ph.D. program in London, Kapany had to take Satinder out on a date. Thanks to his meagre allowance, all he had was the exact change to buy two tickets for a movie! Suddenly, it began to rain and Satinder asked him to flag a cab. Instead of hailing a cab, Kapany said, “Rain, isn’t it wonderful! Don’t you just love walking in the rain?” A lesser date would have protested, but Satinder somehow agreed to walk in the rain! They proceeded to the cinema, his finances intact!

5. Kapany never tied himself down. He shares a moment of self-realization; “What I loved was coming up with a new idea or a thing, building it, commercialising it, and moving on. But when that thing became huge and required a number of people to manage it, I would lose interest.” Knowing yourself well is another secret to longevity.

After his PhD, when Kapany reached New York, to be employed as a professor at the University of Rochester, he had no money. He managed to convince a hotel clerk to give him a room for a few days on credit; that he would wire the money later. He was a brilliant scientist with great people skills and also a successful entrepreneur. The part about how Kapany built his company Optics Technology, how he raised funds from Draper, Gaither & Anderson or even received funds from the National Institute of Health in Maryland - who never supported ‘for profits’ is symbolic of an open mind. He considered everything possible and hence nothing was impossible for him.

All this at a time when India was young and not as well-known as it is today. The part when Satinder came down with Parkinson’s and Kapany’s complete devotion to her treatment - travelling thousands of miles across three continents looking for physicians, hospitals, yogis, clinics, faqirs, etc., anyone who could help - is particularly touching. In closing, the great man prays for peace; and that it is the only way!

Maybe we all need to bend a little to achieve that.