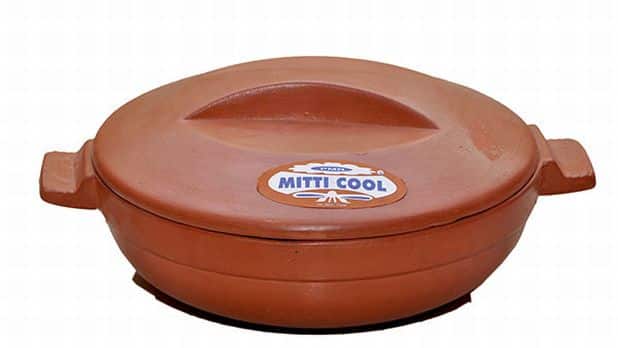 When the 2001 Gujarat earthquake wreaked havoc and destruction, Mansukhbhai Prajapati’s business took a beating. A large part of his stock of earthen water filters was destroyed. A local newspaper ran a photograph of one of his broken water filters with the caption, ‘The fridge of the poor breaks into pieces’. The entrepreneur in Prajapati saw opportunity in this strong depiction of his damaged product. He made water filters but what if he could make an earthen refrigerator that kept food cool without needing electricity?

Thus was born the idea of Mitticool, the refrigerator made of clay that people in villages could afford and easily maintain. After three years of rigorous research on clay, soil and workable designs, Prajapati froze on the model that became the ‘Mitticool’ fridge in 2005. Since then, there has been no looking back.

The walls of the Mitticool refrigerator are made of terracotta clay. It utilises the simple principle of evaporation. Water is made to drip down the sides of the walls which are porous. When the water evaporates it has a cooling effect on the inside chambers. This keeps the contents fresh without using any electricity. The eco-friendly fridge can keep food fresh for up to 5 days. Soon he began receiving bulk orders for his fridge and his innovation started receiving media coverage.

Professor Anil Kumar Gupta of IIM Ahmedabad brought Mitticool to the attention of the National Innovation Foundation in 2005. This helped Prajapati receive a much required boost to expand his business further. Today, a variety of clay products like non-stick earthen tawas, clay cookers, clay pots and utensils are made and sold under the Mitticool brand in addition to the earthen water filters and the refrigerator. Mitticool made sales of Rs. 45 lakh in 2012-13 and has been growing at 15-20% every year.

While participating at a food festival, Mansukhbhai was advised by many visitors to improve on his traditional clay pot. This got him thinking about making his clay cooker. He soon extended this to an entire range of earthen eating and cooking utensils. The Mitticool non-stick coated earthen tawa brings together traditional and modern designs. Since conventional non-stick tawas can be expensive, Prajapati worked on a non-stick coating on the conventional clay tawa. Similarly, he also developed an earthen thermos flask.

Not satisfied with the success of the Mitticool refrigerator, Prajapati is now working on fitting a Reverse Osmosis unit in it so people can also get pure water. The future could also see him develop Mitticools that can cool water within 2 or 5 minutes. His long-term ambitions include developing a house that can run without any electricity, with natural cooling and lighting. He would also love to be included in the Guinness Book of World Records for his inventions.

Former President APJ Abdul Kalam has hailed Prajapati as a ‘true scientist’. He also received a National Award from President Pratibha Patil in 2009, when she requested a Mitticool refrigerator. Mansukhbhai Prajapati comes from a family of traditional clay craftsmen and has backed his entrepreneurial instinct every step of the way to emerge as a leading rural innovator. Along the way he has seized opportunities from every setback, be it the Gujarat earthquake where his stock was destroyed or when he had to sell his ancestral home to repay loans while researching on clay for the Mitticool fridge. Prajapati’s story is an incredible tale of grassroots innovation. Whenever the ground beneath his feet shook, he kept pulling ideas out of mud.