Russia’s chokehold on European Union might freeze the continent

Due to a partial shut-off of gas supplies by Russia and as a buffer against peak winter demand, the European Union plans to fill its gas storage to 80 percent capacity by the beginning of November.

A likely explanation for the reduced gas consumption is the rise in prices as opposed to the rise in temperature.

On February 24 this year, in a major escalation of the 2014 Russo-Ukrainian War, Russia invaded Ukraine. The domino effect of this escalation led to unease and tensions across the globe - economically, politically and mentally.

In Europe, underground gas storage systems (UGS) play a significant role in ensuring gas supply security and flexibility. During the summer, when prices are typically lower, gas storage tanks are refilled, while during the coldest months they are emptied. Europe’s main supply of energy comes from Russia. The Nord Stream 1 pipeline that runs under the Baltic Sea from Russia to Germany happens to be one of the largest pipelines for gas. Due to a partial shut-off of gas supplies by Russia and as a buffer against peak winter demand, the European Union plans to fill its gas storage to 80 percent capacity by the beginning of November. Monthly interim targets have also been set for each country by the EU. The hardest-hit country, Germany, has set a higher goal of being 95 percent full by November. So far, storage targets are being met according to the timelines set.

Nord Stream 1 is owned and operated by Nord Stream AG, whose majority shareholder is Gazprom, the Russian state-owned energy corporation. In July, the pipeline was shut for 10 days for maintenance work. The turbine used in the pipe was sent to Canada for repairs and was stuck there as Europe was being brought to its knees.

German Chancellor Olaf Scholz visited a Siemens Energy factory to check on the 12-metre turbine and reported that it was working fine. He said that there was no reason for Russia to not take back the turbine and restore supplies to pre-war levels. After 10 days, the supply resumed, but it still did not reach pre-maintenance levels, with reports indicating that the pipeline is only working at 20 percent of capacity.

On August 19, Gazprom, in an official statement, announced that the Nord Stream 1 pipeline will be further shut for three days for routine maintenance from August 31.

For Germany, almost 3 percent of the gross domestic product would be lost if all remaining (40 percent) Russian gas supplies were shut off next year, according to the IMF. Harsher winters could exacerbate the effects. "Europe remains dependent on two things: how cold the winter will be and how Russian flows will evolve in spring. Uncertainty on both will likely keep prices supported even if inventories keep rising over the coming months," UBS oil analyst Giovanni Staunovo told Reuters. 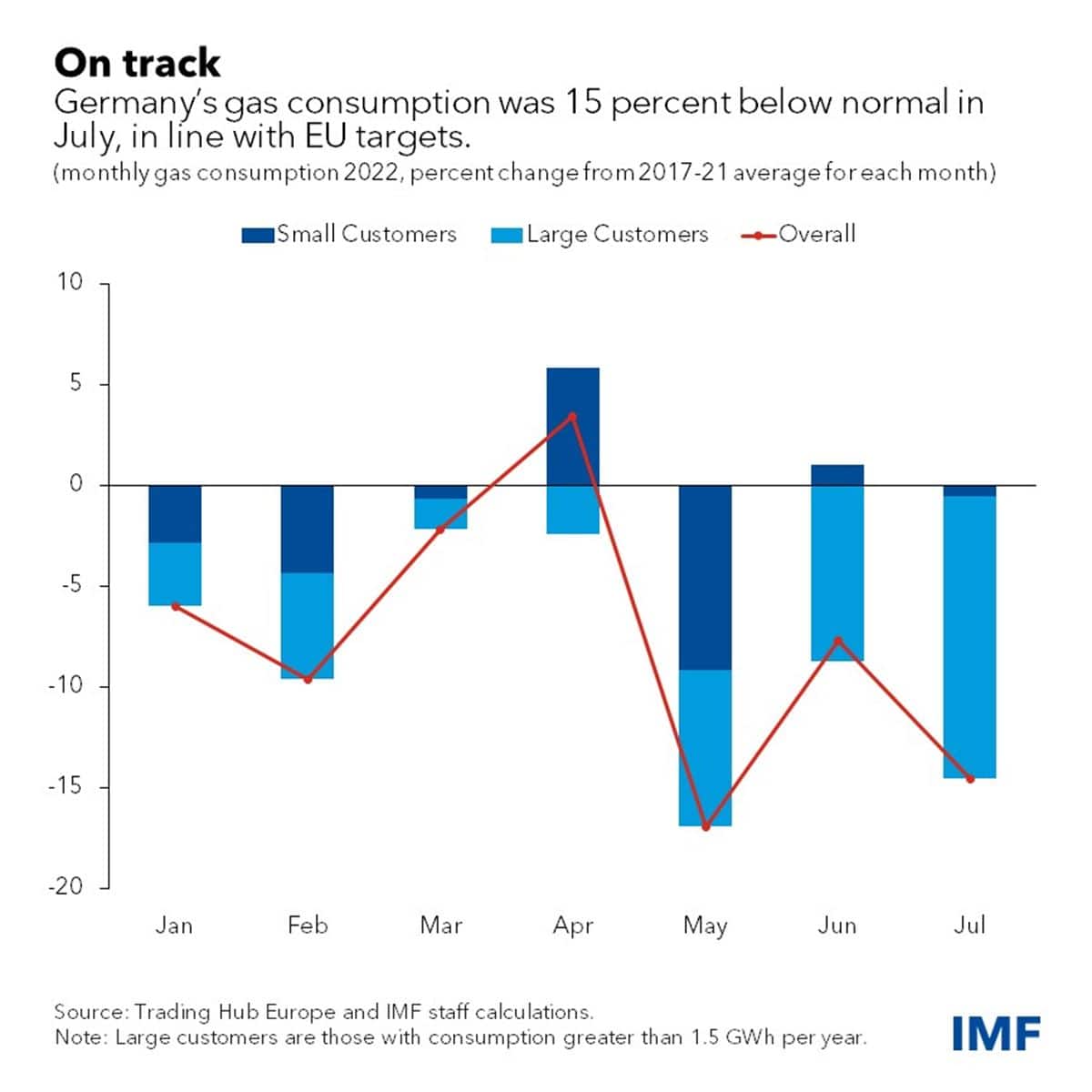 A likely explanation for the reduced gas consumption is the rise in prices as opposed to the rise in temperature. In particular, large businesses are making severe cuts. According to IMF, In June, gas prices for businesses increased by 267 percent, which may explain their reduced gas demand.

In the automotive industry, for instance, renewable energy is already reducing gas consumption. Mercedes-Benz told Reuters that it is now replacing its natural gas-fuelled combined heat and power plants with green electricity and according to Germany's car association VDA, other automakers are also exploring their options.

Another area where gas usage has been reduced is the production of electricity. With a view to reducing reliance on Russian gas, Germany has already cut the share of gas in its electricity production from 15.2 percent last year to around 6 percent this year and has already permitted reconnecting coal-fired power plants to the grid.

Last week, towards the end of August, German electricity reached 995 euros per megawatt hours while the French equivalent surged past 1,100 euros -- a more than tenfold increase in both countries from last year.

In order to further reduce gas consumption, billions are being spent on terminals to bring in liquefied natural gas, much of it from shale fields in Texas. The New York Times reported that officials and heads of state are flying to Qatar, Azerbaijan, Norway and Algeria to nail down energy deals.

Multifaceted efforts are largely making up for the shortfall in Russian gas alternatives. Natural gas supplies in Europe have been roughly equal to last year's during the first half of 2022, despite Gazprom's cuts, according to the NYT.

The margin for error is thin in the face of rising prices and a Russian threat that does not appear to be abating.