Russia to cut gas to Poland and Bulgaria, making energy a weapon

Moscow is making good on a threat to halt gas flows to countries that refuse President Vladimir Putin’s new demand to pay for the fuel in rubles.

Pipework at a gas pre-treatment unit at the Gazprom PJSC Chayandinskoye oil, gas and condensate field, a resource base for the Power of Siberia gas pipeline, in the Lensk district of the Sakha Republic, Russia, on Tuesday, Oct. 12, 2021. European natural gas futures declined after Russia signaled that it may offer additional volumes soon.

Russia will cut off the gas to Poland and Bulgaria on Wednesday in a major escalation in the standoff between Moscow and Europe over energy supplies and the war in Ukraine.

Moscow is making good on a threat to halt gas flows to countries that refuse President Vladimir Putin’s new demand to pay for the fuel in rubles. The European Union has rejected the move in principle but now payment deadlines are starting to fall due, governments across Europe need to decide whether to accept Putin’s terms or lose crucial supplies -- and face the prospect of energy rationing. 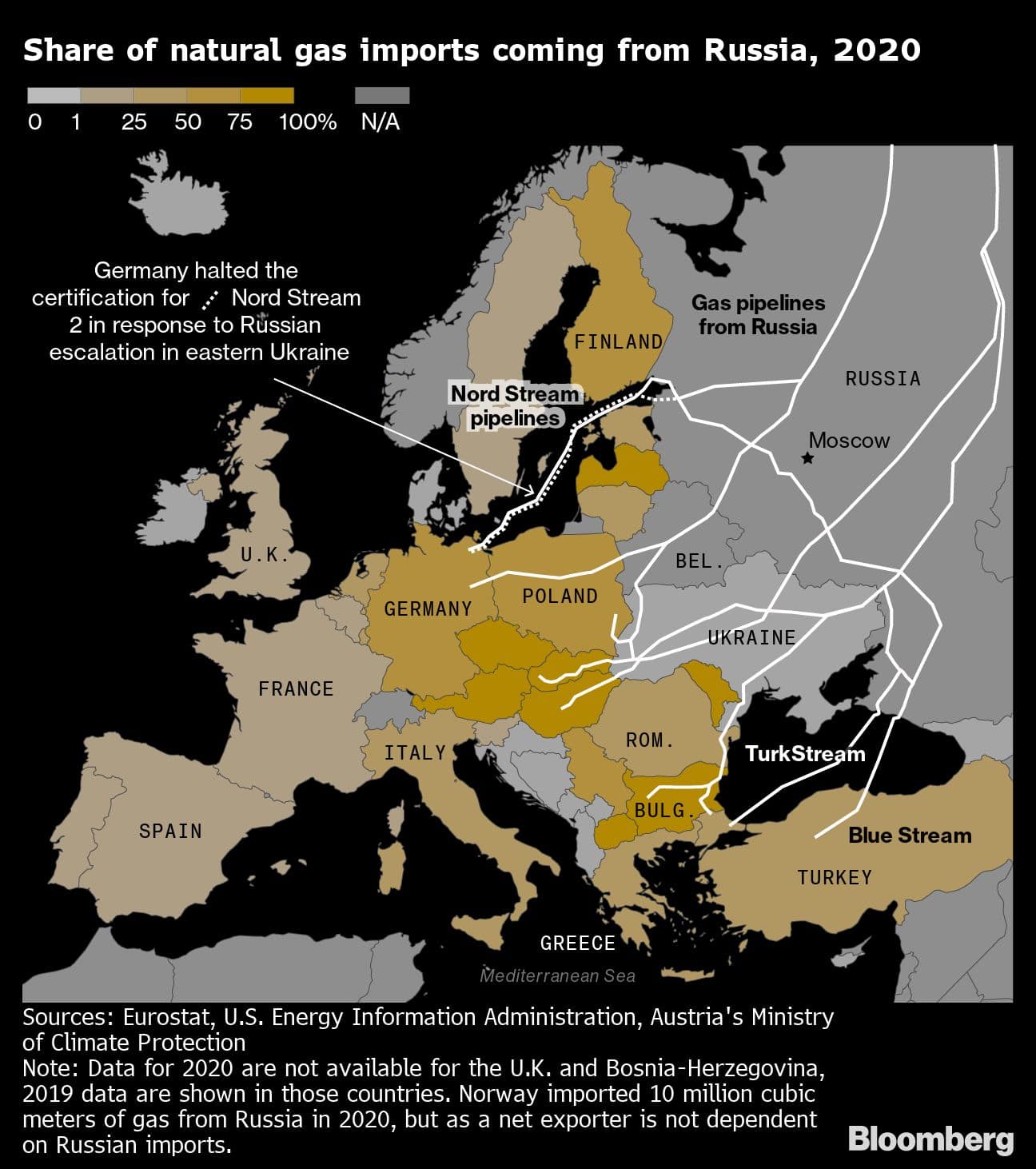 European gas prices surged as much as 17% as traders calculated the risk of other European countries being hit next.

“This is a turning point that has been accelerated by Russia today,” said Piotr Naimski, Poland’s top official for strategic energy infrastructure.

The threat of cutoffs has been looming for weeks, but there was an indication last week that the EU was suggesting a potential way out of the standoff. The move against bloc members Poland and Bulgaria probably makes some kind of compromise less likely. It also removes from the EU’s toolkit the option of sanctioning Russian gas.

The focus now turns to other European capitals, particularly Germany, which is heavily dependent on Russian gas. There was no immediate reaction from Berlin.

“Any buyer rejecting the new payment procedure out of hand is running a very real risk of supplies being cut,” said Katja Yafimava, senior research fellow at the Oxford Institute for Energy Studies.

In Rome, the government is monitoring the situation, and the concern is that what is happening to Poland could now occur elsewhere, according to a person familiar with the situation. For now the assessment is that there is no immediate risks to cut off gas to Italy, the person said. Italy is also a major importer of Russian gas, though it’s taking steps to diversify its supply.

“The decision of Russia to stop gas supplies to Poland and Bulgaria represents an historical turning point in the bilateral energy relationship and might well represent the preview of similar moves coming up vis-a-vis other European countries in coming weeks,” said Simone Tagliapietra, a researcher at the Bruegel think tank. “European governments now need to deploy all emergency measures they have at their disposal, both on the supply and demand side to ensure security of supply.”

The first ruble payments are due in late April and May, though companies’ individual payment schedules have not been disclosed. Polish news outlet Onet.pl reported earlier that the deadline for Poland’s main gas company PGNiG’s fell on Friday, and Gazprom said on Tuesday the payment was due immediately.

Other companies have more time and European governments and executives are in many cases still trying to figure out how best to respond. The EU last week suggested that companies continue to pay in euros, and seek possible exemptions from Moscow to the decree.

The decree demands companies set up two accounts,  one in a foreign currency and one in rubles, with Gazprombank. The Russian bank would convert the foreign currency payments into rubles before transferring the payment to Gazprom PJSC, the state-owned gas company.

“The Polish example suggests that those buyers that will not accept the new mechanism or will not secure an exemption from it are likely to see their supplies cut as well if no payment has reached Gazprom’s account when it is due,” Yafimava said.

Poland says it’s fully prepared for a cutoff of all energy supplies and has been outlining plans to live without Russian gas even before the war. The country’s long-term gas contract with Russia expires at the end of this year and the government had repeatedly said it didn’t plan to extend it. It has lined up LNG supplies and plans to start a pipeline from Norway in October.

The government said on Tuesday it has enough fuel in storage. Customers won’t be affected, and the government plans to keep filling storage up to 90%.

Gazprom's move to completely shut off gas supplies to Poland is yet another sign of Russia's politicisation of existing agreements & will only accelerate European efforts to move away from Russian energy supplies
@IEA stands firmly with Poland https://t.co/7EMaIktulb

Bulgaria has also taken steps to reduce its dependence, though it’s still heavily reliant for now. Still, the immediate hit will be tempered by warmer temperatures.