Federal Reserve Chair Jerome Powell has said repeatedly, including several times this week alone, that the strength of the country's economic recovery depends on keeping the novel coronavirus under control -- critical to instilling confidence in Americans that it is safe to resume normal activity.

With COVID-19 deaths in the US topping 200,000 this week following a rise in new daily cases last week for the first time in eight weeks, the role of the economy in the looming presidential election could take on heightened importance -- but it is not clear how.

Federal Reserve Chair Jerome Powell has said repeatedly, including several times this week alone, that the strength of the country's economic recovery depends on keeping the novel coronavirus under control -- critical to instilling confidence in Americans that it is safe to resume normal activity.

Among the six battleground states, ones that are hotly contested because their population can swing either to Republicans or Democrats, Wisconsin looks particularly troubled less than six weeks before the November 3 election determines whether Republican President Donald Trump is re-elected or is ousted by Democratic presidential nominee Joe Biden.

Wisconsin stands out for its high and rising load of new coronavirus cases, about two-and-a-half times the US average, adjusting for population.

With more than 1,900 new cases on average each day, Wisconsin's governor this week declared a state of emergency.

The seven-day average of new cases is also rising sharply in Arizona, another battleground state, but the rate on a per capita basis is below the national average. 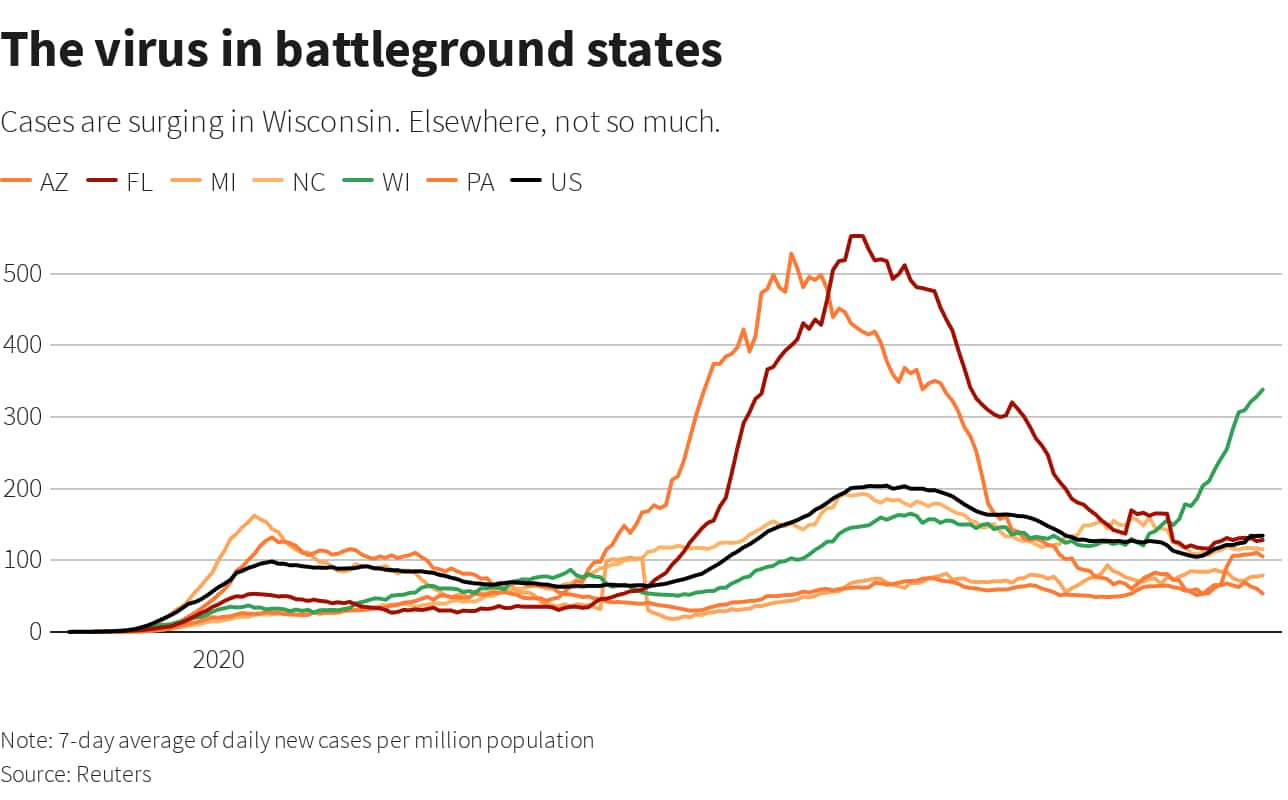 An incumbent president's reelection usually is closely tied to the health of the economy. But the links between the virus, the economy and how people will vote in the presidential election remain far from clear.

Among the six battleground states, Biden appears to be ahead in just two, Reuters/Ipsos polls show: Michigan, where the virus has mostly stayed under control, and Wisconsin, where it has not.

The unemployment rate in Pennsylvania, at 10.3 percent in August, was higher than in any other of the battleground states, even as the case load there is low and falling. Arizona's unemployment rate, at 5.9 percent, was the lowest.

Nationally, COVID-19 cases surged in the summer, just when household spending staged a comeback from the worst quarter in US economic history since at least 1947.

But, as JP Morgan chief US economist Michael Feroli noted this week, households were getting a big fiscal boost at the time. In July they received $75 billion in extra unemployment benefits. Those benefits expired at the end of July, leaving out-of-work households with far less cash to spend.

July was also the month when the Paycheck Protection Program delivered its peak support to small businesses.

Government aid is mostly tapped out and the US recovery is showing signs of slowing, though bright spots remain, with economic data this week confirming a hot housing sector and a burst of new business orders for equipment.

However, some 26 million Americans continue to rely on unemployment benefits, foot traffic to US restaurants and retail stores is showing little recent improvement, and small businesses are increasingly stressed, data showed this week. One survey showed 40 percent of small businesses expect they will not earn enough revenue through the end of the year to stay in business.

Analysts at banks including JP Morgan and Goldman Sachs this week trimmed their forecasts for growth next quarter.