Nawaz Sharif resigns as Pakistan PM, brother Shahbaz frontrunner to replace him - as it happened

Live updates of the Pakistan Supreme Court's verdict on the Panamagate case. Prime Minister Nawaz Sharif has been disqualified.

* Pakistan PM Nawaz Sharif disqualified by Supreme Court from holding office
* Verdict was passed in connection with Panama Papers case that related to ill-gotten wealth
* Sharif resigned as Prime Minister a few hours after the verdict
*  data-scayt-word="Nawaz's" data-scayt-lang="en_US">Nawaz's brother Shahbaz, the current Punjab Chief Minister, is the frontrunner to replace him

* No Pakistani Prime Minister has ever completed his/her full tenure

20:48 Geo News reported that PML-N lawmakers expressed reservations over the disqualification of Nawaz Sharif and said that his removal was not on the basis of Panama Papers.

19:50 After a consultative session of the ruling PML-N, Shehbaz has emerged as the most likely candidate to be the next prime minister of Pakistan after an interim premier has served the 45-day period, Geo News reported.

Shehbaz, 65, is currently serving as the chief minister of Punjab.

18:42 The Election Commission of Pakistan (ECP) has issued a notification disqualifying Nawaz Sharif as a member of the National Assembly.

18:15 Ali Zafar, a barrister and former president of the supreme court bar association, said: “We are currently without a government because the constitution doesn’t envision the disqualification of the prime minister.”

17:46 The final court order is now available. Here are some excerpts:

"The Election Commission of Pakistan shall issue a notification disqualifying respondent No. 1 Mian Muhammad Nawaz Sharif from being a Member of the Majlis-e-Shoora (Parliament) with immediate effect, whereafter he shall cease to be the Prime Minister of Pakistan."

17:28 The federal cabinet was dissolved after Nawaz Sharif relinquished his responsibilities as the prime minister of Pakistan. Speaker National Assembly Ayaz Sadiq will assume the responsibility of the interim prime minister, according to Dawn.

17:12 Nawaz Sharif and his party leaders are currently in meetings to decide on their next course of action.

16:51 More on what Imran Khan had to say about the verdict. "Pakistan has won today. Historically there have always been two kinds of laws prevailing in the country, one for the weak and poor and the other for the rich and powerful."

16:40 Nawaz Sharif has joined a long list of Pakistan Prime Ministers not to have completed a full tenure in the last 70 years. Read the story here. 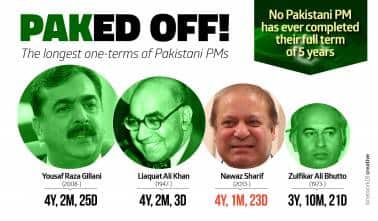 16:05 Imran Khan is speaking now. Says he does not have any personal enmity with the Sharif family, but the law has prevailed in this case.

Speaking to Dawn News, Musharraf also said that it is not the time for early an election.

The 73-year-old called for an interim government of technocrats to run the country and said that the Supreme Court should allow them to undertake "politically restructuring."

Musharraf, a former army chief, had staged a coup to dislodge Sharif from power during his previous stint in the late 90s.

15:43 While putting in his papers, Sharif said he had "serious reservations" about the Supreme Court's verdict.

15:31 More from Maryam Nawaz Sharif. She tweets: Today will pave the way for Nawaz Sharif's resounding victory in 2018. He will be unstoppable. Insha'Allah. Rok sakte ho to rok lo!

15:25 Nawaz Sharif's daughter, who was also disqualified by the court, has now tweeted: Another elected Prime Minister sent home, but only to see him return with greater force & support & soonest Insha'Allah. Stay strong PMLN.

15:10 Ahsan Iqbal Chaudhary is another contender to become the Prime Minister, according to media reports.

He is currently the minister of planning and development and was overseeing the China-Pakistan Economic Corridor (CPEC) project worth USD 54 billion.

14:55 Former Interior Minister Chaudhry Nisar Ali Khan who had earlier advised Nawaz Sharif to accept the verdict, has now said that he would never leave the party.

14:44 Who will succeed Sharif? Apart from his brother Shahbaz, Defence Minister Khawaja Asif is one of the most trusted allies of the outgoing prime minister and considered the mostly likely to succeed him.

The former banker has held a series of key positions within the PML-N since 1991. He was elected to the National Assembly from his home district of Sialkot - an important manufacturing centre in Punjab province - since 1993.

He is viewed as a strong critic of the powerful military and commentators say that his hardline stance against the army has created problems for Sharif.

14:38 And here's a timeline of the events that led to Nawaz Sharif losing his job.

14:34 Wondering why exactly Nawaz Sharif was disqualified? Here's our explainer.

14:29 This was Sharif's third term as Prime Minister and he has been ousted prematurely on all three occasions. Graft allegations cost him his job in 1993 while a military coup dislodged him in 1999.

14:24 Pakistan is less than a year away from general elections. So there is also the possibility that Nawaz Sharif's party could call for early elections. As things stand, however, he is not eligible to fight elections.

At a press conference after the verdict, State Information Minister Marriyum Aurangzeb said, "Nawaz does not need a chair, he is a reality. That day is not far, when he will be chosen for the fourth time."

14:11 India has yet to officially react to Nawaz Sharif's disqualification.

14:07  Although Sharif has been disqualified as prime minister, he remains the head of the Pakistan Muslim League-Nawaz (PML-N), the largest party in the National Assembly.

Sharif will oversee the nomination of his successor who will then be rubber stamped in a parliamentary vote, where his party and coalition partners command a 209-seat majority in the 342-seat house.

13:56 While the Supreme Court has disqualified Sharif, he technically still holds the office. Under Article 190 of the Constitution, it is the president’s prerogative to decide on the matter that decide whether a sitting prime minister should be asked to step down or not.

13:52 What next for Nawaz? For one thing, he cannot hold public office. But he can consider filing a review plea. More importantly, corruption cases will be opened against him and his daughter, apart from Finance Minister Ishaq Dar. A judgement on these references should be announced within six months, the court said.

13:43 Reuters reports that one of the judges at the Supreme Court, Ejaz Afzal Khan, said that Sharif was no longer "eligible to be an honest member of the parliament".

13:38 Finance Minister Ishaq Dar was also disqualified. Dar was disqualified for being unable to explain his ownership of assets beyond his means.

13:35 Ahead of the verdict, there was speculation that Nawaz's brother and Pakistan Punjab Chief Minister Shahbaz Sharif would take over as Prime Minister.

According to Geo News, Tareen said, "A new chapter of history has been written today and decision came through the efforts of Imran Khan, PTI workers and supporters."

"Pakistanis had lost hope for justice but Imran Khan was the lone person who did not lose hope," he added.

13:20 Marriyum Aurangzeb, Minister of State for Information and Broadcasting and senior leader of Nawaz Sharif's Pakistan Muslim League (Nawaz) says that they will explore legal options.

She further says that Nawaz Sharif does not need the seat of the Prime Minister.

13:12 No Pakistani civilian Prime Minister has completed a full-term in office, ever.

Keeping with the tradition, not an single prime minister in Pakistan has been allowed to complete his/her 5-year tenure.

No Pakistan PM has ever completed their full term of five years.#NawazSharif had done 4 yrs, 54 days

13:06 The bench said that Nawaz Sharif was dishonest to the parliament and was not deemed fit for his office.

13:02 The court says that all material collected by the joint investigation team (JIT) will be sent to an accountability court. It further said that a judgement should be announced within 30 days.

12:52 Nawaz Sharif's daughter Maryam Sharif has also been disqualified by the court.

12:47 The court has asked Nawaz Sharif to vacate the position of the Prime Minister immediately.

12:45 The Supreme Court has also asked to initiate criminal proceedings against Nawaz Sharif.

12:38 Supreme Court of Pakistan's five-judge bench has decided to refer Nawaz Sharif to the National Accountability Bureau (NAB) in the first part of the verdict.

12:34 The judges have started the proceedings.

12:32 The judges have reached the courtroom and are expected to begin deliver the verdict within moments.

12:31 Heavy security arrangement at the Supreme Court complex in Islamabad. 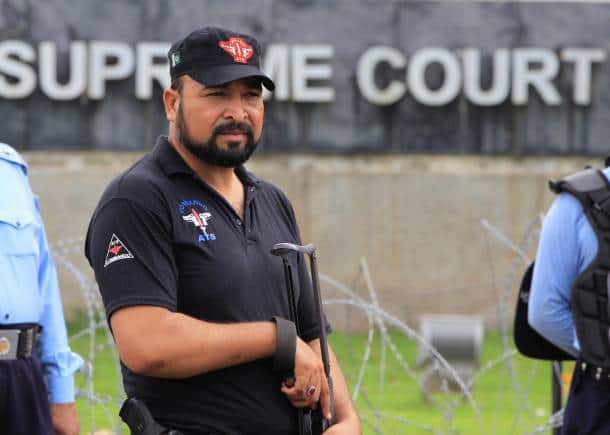 A member of the police elite force stands guard outside the Supreme Court in Islamabad, Pakistan July 28,2017 (REUTERS/Caren Firouz)

12:24 According to Pakistani media reports, Nawaz Sharif's party cadre is assembling in various cities across Pakistan.

12:15 Sloganeering heard outside the courtroom as large crowd anticipates the verdict.

12:09 Babar Awan is the former Minister for Law and a Senate member.

"This is a new beginning for democracy in this country," she said.

"If the apex court rules in your favour, there will be people who will provoke you, but you must protect not only yourself but also the country," he said.

11:44 A look at home Pakistan's newspapers are covering it.

11:42 The Pakistan Stock Exchange ended nearly flat on Thursday with the KSE-100 shedding 0.03 percent as investors anticipated the Supreme Court verdict on the case. Concerns of political uncertainty looms large on the country.

11:33 Here's a quick rundown of what has happened so far:

> On April 5, 2016, amidst opposition's calls to step down, Sharif, in a nationwide address declared setting up of a judicial committee led by a retired Supreme Court. However, no such committee was named.

> On April 20, 2017, the Supreme Court said there was insufficient evidence to remove Sharif and announced formation of the Joint Investigation Team (JIT) to investigate and report on the matter.

> In the JIT report submitted on July 10, the team said that Sharif, his sons and daughter Maryam Sharif were not able to justify their assets and income. The report also held Maryam guilty of falsifying evidence before the Supreme Court. It said that Calibri font was used in documents that were showed to be from 2006, whereas the font was not publicly available until January 2007.

11:20 Imran Khan had something to say about the Pakistani Prime Minister and his ministers.

11:18 Here's all you need to know about the Panamagate scandal.

11:17 The bench also has the option of referring the matter back to the trail court without disqualifying, something that the Sharif-led ruling party Pakistan Muslim League (Nawaz) will be hoping for.

11:16 According to The Express Tribune, two of the five judges are already known to have voted against Nawaz Sharif.

This means, if one more judge votes against Sharif, he will be disqualified as the Prime Minister.

11:13 The verdict will be delivered by a 'larger bench' in Court Room No. 1 in the Supreme Court complex in Islamabad.

11:10 The alleged financial irregularities came to light after the '2015 Panama Papers leak' that had financial details of more than 2 lakh offshore entities.

The opposition parties have been pushing for the 67-year-old's resignation after his name surfaced in the leaks.

11:06 Sharif's possible disqualification is likely to bring political uncertainty to Pakistan. It will also deliver a decisive blow to the ruling Pakistan Muslim League (Nawaz), just a year before the next general election.

PM Nawaz Sharif's family members are accused of money laundering, owning of assets in London through off shore companies.

11:00 Welcome to the Live updates of the Pakistan Supreme Court's verdict of the Panamagate case. The top court is all set to deliver its verdict on Pakistan Prime Minister Nawaz Sharif and his close family members including his daughter Maryam Sharif and his two sons Hussain Sharif and Hassan Sharif.

Sharif can be disqualified as the Prime Minister and could be barred from holding any public office of power for 21 years if found guilty.
Load more