In-Depth | ‘Little flu’ and a ‘victory parade’: How some countries responded to the coronavirus pandemic

While some countries have been lauded for their prompt and effective response to the coronavirus pandemic, there are others being looked upon with suspicion and for downplaying risks.

On May 21, the number of confirmed cases of COVID-19, the disease caused by the novel coronavirus, crossed the 50 lakh-mark globally. There have been at least 3.2 lakh fatalities registered from the global outbreak so far.

But on the brighter side, almost 20 lakh patients across the world have already recovered.

While the situation we find ourselves in is unprecedented in modern times, the number of COVID-19 cases and the death toll is still nowhere close to some of the pandemics of the past such as the Spanish flu outbreak of 1918.

In absence of a vaccine and with limited knowledge of the new virus, many countries have taken different approaches to curb its spread. From drawing up lessons from the past to imposing different kinds of lockdowns, governments have scrambled to do what they can.

The first to undertake such measures was the Chinese city of Wuhan, the original epicentre and from where the virus is said to have been first reported in late 2019. The city was placed under a strict lockdown and cut off from the world, as the Chinese government mobilised resources from across the country to stop the outbreak. Soon, social distancing norms and strict measures were rolled out across China.

While the first case and first death outside China were reported in Thailand in January and the Philippines in early February, it took a while for the world to take note of the impending danger. Some of the precautionary measures in the rest of the world were only triggered when the number of confirmed COVID-19 cases exploded in Iran and parts of Europe.

Italy and Iran reported their first cases on January 31 and February 17, respectively. By March 25, when India imposed the first phase of the nationwide lockdown, the two countries had around 74,300 and 27,000 confirmed cases, respectively.

With most countries in the West, including the United States, the United Kingdom, France and Germany and Spain having seemingly passed the peak, the focus in now shifting to the emerging world. On May 19, India’s count officially crossed China’s announced tally. The number of cases in Indonesia and Mexico continue to swell despite the lockdowns in place.

With no nationwide lockdown, the United States is the worst-affected country. It has reported over 15.5 lakh. Russia, at number two, has just crossed the 3 lakh-mark.

What is certain is that countries have used different methods and techniques to counter the virus and deal with its socio-economic impact. Some methods have clearly worked better.

In April, Moneycontrol had analysed how Taiwan had successfully blocked the novel coronavirus.

It is important to note that the island nation was able to accomplish this despite direct and robust connectivity to the mainland.

Taiwan, which is not even a member of the World Health Organization (WHO), managed to fight the outbreak without imposing a lockdown by responding quickly and by using big data analytics.

New Zealand’s Prime Minister Jacinda Ardern has been credited for doing something similar, albeit with a lockdown. The island nation, home to around 4.8 million people, banned entry of foreigners and imposed a nationwide lockdown very early

To consolidate the grip on the situation, it enforced ‘level 4’ restrictions under which individuals were only allowed maintain contact with people within their household. Strict implementation of these measures and clear communication helped New Zealand flatten the curve.

Read: Why are women-led nations doing better with COVID-19?

South Korea, which registered over 850 single-day cases on March 3, managed to control the situation so well that it held an election for the National Assembly in mid-April.

Drive-through screening clinics (which helped in mass testing), intensive contact tracing, tracking applications and taking patients with mild symptoms to ‘Life Treatment Centers’ instead of hospitals are some of the lessons other countries are drawing from South Korea’s success.

However, there are many countries doing things differently.

Norway and Denmark put strict restrictions in place when the virus started sweeping through Scandinavia. However, their neighbour Sweden chose a very different option.

The country only closed its high schools and colleges. It kept other educational institutions (including preschools), restaurant and pubs open. Of course, there were restrictions on large gatherings.

It must be noted that the government did stress on social distancing, hand washing and protecting senior citizens. The strategy was largely based on trust between the government and the people, and a citizen being expected to do what is correct, without having to be told.

According to a BBC report, the Swedish Public Health Agency pushed the idea that a large proportion of cases would be mild. Hence, the aim was to introduce measures that were less stringent and which could be maintained over a long duration. 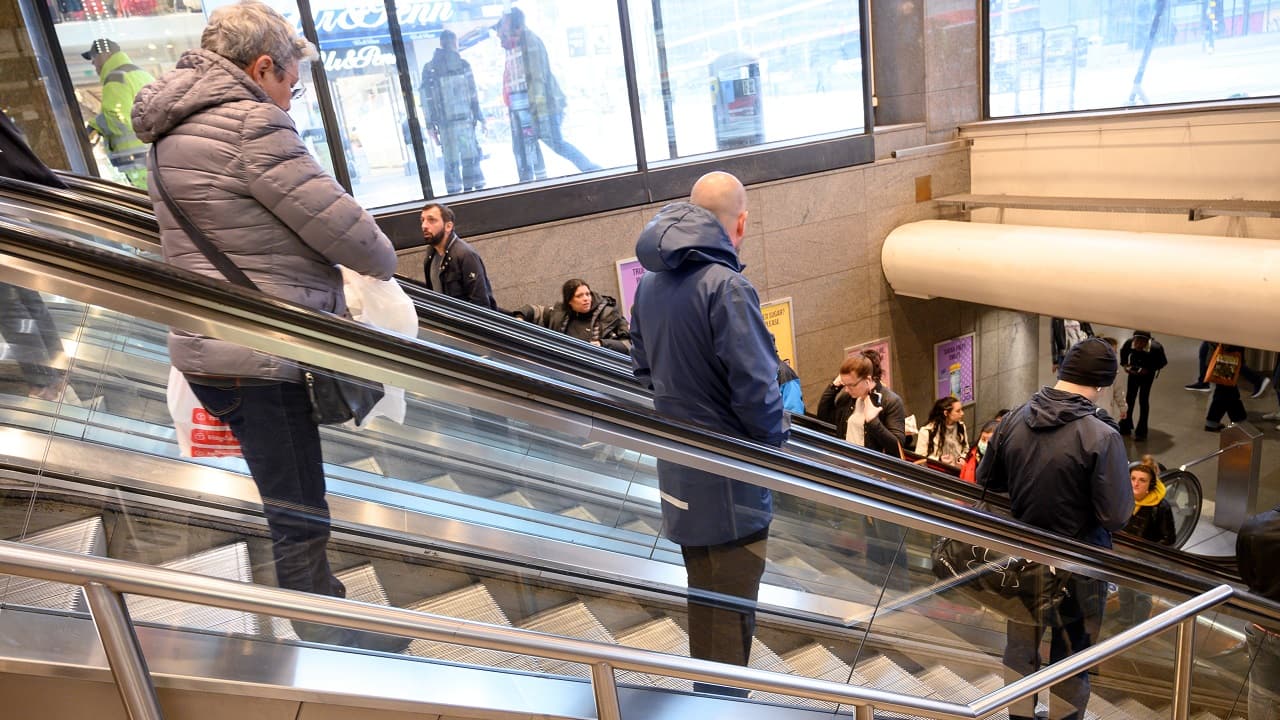 People ride an escalator respecting social distancing at the central train station, as the spread of the COVID-19 outbreak continues, in Stockholm, Sweden on May 12, 2020. (Image: TT News Agency/Henrik Montgomery via Reuters)

However, statistics suggest that Sweden’s “gamble” may have backfired.

Sweden has so far reported around 32,100 cases and 3,871 deaths. The country has a COVID-19 death rate of 384 per 10 lakh population. This is significantly higher than the world average of 42. In its immediate neighbourhood, Norway’s rate is 43 per 10 lakh population, Finland’s is 55 and Denmark’s is 96.

The policy seems to be adversely impacting people in the high-risk categories, such as senior citizens. Care home residents are accounting for almost half of all deaths linked to COVID-19 in the country.

Still, Anders Tegnell, Sweden’s state epidemiologist who has led the country’s coronavirus response, is defending the strategy. “I don’t think anybody who is really thinking that much about this, is really sure about any strategy, because we’re all doing something that nobody did before,” Tegnell told CNBC.

“On the other hand, it looks like it’s going to work out. We are clearly past the peak in Stockholm and our health care (system) has been able to handle it, we have extra beds in the hospitals and everybody that needs to be treated has been treated; even non-COVID patients have been able to get treatment.”

Read: In the coronavirus fight in Scandinavia, Sweden stands apart

As of May 21, Brazil was speeding towards the 3 lakh confirmed cases-mark. The South American country has reported over 18,800 deaths due to the pandemic. This, after the country recorded nearly 20,000 cases on May 20 alone.

Brazilian President Jair Bolsonaro has been accused of downplaying COVID-19 as nothing more than a "little flu" and has told Brazilians to ignore quarantine restrictions. His handling of the situation has been widely criticized globally.

The 65-year-old has been seen shaking the hands of supporters and even clicking selfies with them, as they gather outside the presidential palace in capital Brasilia every Sunday calling on the government to end restrictions. Brazilian President Jair Bolsonaro gestures during a protest against the President of the Chamber of Deputies Rodrigo Maia, Brazilian Supreme Court, quarantine and social distancing measures, amid the COVID-19 outbreak, in Brasilia, Brazil on May 17, 2020. (Image: Reuters/Adriano Machado)

Earlier this month, Nelson Teich became the second doctor to leave the top Health Ministry job. In April, Bolsonaro had fired Luiz Henrique Mandetta from the position. Mandetta had urged people to observe social distancing and stay indoors — something the president had publicly criticised him for.

Bolsonaro had demanded that Teich should issue guidelines for early use of hydroxychloroquine (HCQ) to treat COVID-19 patients. This was despite studies casting a doubt on the anti-malarial drug’s effectiveness against this disease and amid concerns that it may cause heart problems.

Read: ‘A perfect storm’ in Brazil as troubles multiply for Bolsonaro

Belarus: Parade in a pandemic

While countries in Europe are slowly reopening public places, restaurants and businesses, Belarus isn’t. This is because the country never implemented a lockdown in the first place.

Movie theatres, coffee shops and churches in Belarus have remained open. It is the only European country to have not paused its football championship. However, the crowd in stadiums has reduced.

Based on observations made in early April, a WHO technical mission had warned that Belarus had “entered the community transmission scenario” and required “immediate implementation of additional interventions — particularly physical distancing measures.” People attend the Victory Day parade, which marks the anniversary of the victory over Nazi Germany in World War II, amid the COVID-19 outbreak, in Minsk, Belarus on May 9, 2020. (Image: Reuters/ Vasily Fedosenko)

Despite these warnings, President Alexander Lukashenko — often described as the “last European dictator” — even refused to cancel the ‘Red Square 9 May parade’ meant to mark the 75th anniversary of victory in World War II. Many of the veterans who attended the parade are in their nineties and vulnerable to COVID-19.

The country’s health ministry however issued recommendations for people to use a hand sanitiser and wear masks and avoid crowded places.

With no strict measures in places, Belarus has so far reported over 33,300 cases and 185 deaths due to COVID-19.

Read: ‘There are no viruses here’: Leader of Belarus scoffs at lockdowns

‘Nothing to hide’ in Turkmenistan

In the early months of the pandemic, Turkmenistan’s national carrier suspended flights to Beijing and Bangkok, Thailand. By the end of February, the country had started refusing entry to citizens from countries affected by the virus. In March, international flights were stopped completely.

While these measures may seem as prompt and effective, not everyone is willing to believe that Turkmenistan managed to ward off the virus.

As on May 21, Turkmenistan — often described as ‘central Asia’s North Korea’, has not reported any case of COVID-19 case.

Due to lack of transparency and the absence of independent observers in Turkmenistan, experts have been taking the government’s claim with scepticism.

On March 31, Reporters Without Borders (RSF) published a report alleging that the Turkmenistan government had “banishing the word ‘coronavirus’ from the Turkmen vocabulary.”

The organization updated this the following day, saying authorities were “avoiding use of the word 'coronavirus' as much as possible” to deter the spread of information about the pandemic.

By doing so, RSF claimed, “Turkmenistan’s government is putting its citizens in danger”.

Also read: In-Depth | Pandemic, people and power — how the coronavirus crisis is reshaping strongman politics across the world

Officials from the politically isolated oil-rich country have repeatedly insisted that they have nothing to hide.

"If there was a single confirmed coronavirus case, we would have immediately informed ... the World Health Organization in line with our obligations," Foreign Minister Rashid Meredov said in April.

"We are not hiding anything," Meredov added, speaking alongside United Nations (UN) officials.

According to a report by Radio Free Europe/Radio Liberty, President Gurbanguly Berdymukhammedov recently approved a government plan on “to stand against the pandemic and ways to rapidly react to it."

As part of the plan, restrictions would be imposed on mass gatherings and swimming in the Caspian Sea would be banned. These developments have added to suspicion: why would a country tighten measures if there was no outbreak?

MakeMyTrip lays off 350 employees due to COVID-19 impact

Coronavirus impact: Bollywood to resume shoots, here are the guidelines

Sectors to gain from shift of supply chains from China

Here's how states are preparing for Unlock 1.0

Hello, this is... | Sonu Sood on social activism in the times of COVID-19