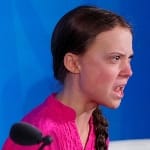 The Earth is a fine place and worth fighting for. These words by Ernest Hemingway drive home a strong message in the plainest of words – a message which needs to be imbibed in governments and leaders of countries across the world.

16-year-old Greta Thunberg, fortunately, understood the essence of the quote, and set out on a mission to drive change. She has not become the face of climate activism overnight, nor did she start with the aim of becoming one. Her objective was straightforward – the government takes radical response to climate change.

At the United Nations Climate Action Summit held in New York on September 23 this year, Greta, a teenager from Sweden, berated world leaders.

Her demeanor reflected her words. She was hurt, angry and exasperated by the sheer indifference that several leaders have displayed in tackling climate change. It was almost as if she could feel the urgency of the situation in her body, when lawmakers across the world were oblivious to it.

"This is all wrong. I shouldn't be up here. I should be back in school on the other side of the ocean. Yet you all come to us young people for hope. How dare you!

You have stolen my dreams and my childhood with your empty words. And yet I'm one of the lucky ones. People are suffering. People are dying. Entire ecosystems are collapsing. We are in the beginning of a mass extinction, and all you can talk about is money and fairy tales of eternal economic growth. How dare you!” she said.

She spoke as a representative, nay guardian, of the current generation and the future generations to come – those who will bear the maximum brunt of climate change.

"You are failing us. But the young people are starting to understand your betrayal. The eyes of all future generations are upon you. And if you choose to fail us, I say: We will never forgive you.

"We will not let you get away with this. Right here, right now is where we draw the line. The world is waking up. And change is coming, whether you like it or not.

And this was not the first time she addressed the esteemed world body. In December last year, she addressed the leaders of nearly 200 nations at the United Nations Climate Action Summit held in Poland. Pressing on bringing climate change at the centre of the political discourse, then 15-year-old Greta reprimanded world leaders saying, “Since our leaders are behaving like children, we will have to take the responsibility they should have taken long ago.”

She also had a one-on-one discussion with UN Secretary-General António Guterres.

She also gave a compelling speech at Davos in January 2019, beseeching top leaders to act on climate change urgently.

Angered by the lackadaisical stance of countries towards the cause of climate change, she had told The New Yorker, “The politics that’s needed to prevent the climate catastrophe—it doesn’t exist today. We need to change the system, as if we were in crisis, as if there were a war going on.” 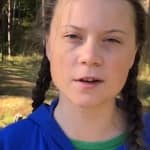 After her impassioned, and a rather pointed speech at the summit, the 16-year-old was heavily criticised by right-of-centre television and social media commentators.

For instance, expert Michael Knowles on a show hosted by Fox News on September 23 called Greta “a mentally ill Swedish child” (Greta suffers from Asperger’s Syndrome, a form of autism).

While Fox News apologized for the comment and said that the channel has no plans of calling him back, Knowles, who rights for the conservative news site The Daily Wire, defended his remarks on Twitter, accusing Greta’s supporters of exploiting her.

The notion that she is being used as a puppet by her supporters was also repeated by other conservatives including Dinesh D’Souza, who likened her image to the ones used by the Nazis to further their propaganda.

D’Souza posted a picture of Greta, in her signature long braids, alongside an illustration an illustration of a young woman in braids standing in front of a Swastika flag.

Sebastian Gorka, who worked in the White House briefly under President Trump, wrote on Twitter that Ms. Thunberg’s remarks were “disturbingly redolent of a victim of a Maoist ‘re-education’ camp.”

Fox News also hosted a show where anchor Laura Ingraham called Greta’s speech “chilling” and ran a segment on how the “hysteria” around climate change is gripping the American Youth.

However, Greta has shrugged off personal attacks calling them tactics to divert attention from the issue of climate change. Environmentalist Bill McKibben told The New York Times, “Greta has said from the start that people attack her because they can’t attack the science; that seems undeniable.”

“The attacks reveal the hollowness — intellectual and moral — of the climate-denying right,” Mc Kibben added. 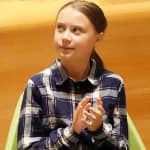 An unexpected rendezvous with Mr Trump?

While her unswerving efforts have not distracted her from her path, a little encounter with US President Donald Trump at the Climate Action Summit tempted her for a subtle response.

Although it was not exactly a meeting as it was two individuals present at the same venue, social media was flooded with reports of Greta giving Trump the ‘side eye’.

Later, responding to her speech at the summit with a jibe, Trump tweeted, “She seems like a very happy young girl looking forward to a bright and wonderful future. So nice to see!”

Opting to not start a Twitter duel, Thunberg slyly changed her bio to Trump’s tweet. The move was lauded as the perfect comeback for the President, who has often disregarded the threat of climate change.

In fact, it was a surprise for most media persons when Trump appeared at the summit, even if it was only for a few minutes.

Last year, Trump had rubbished a report by his own government on the adverse effects of climate change. The findings of the report had suggested that unchecked global warming will wreak havoc on the US economy and cost the US hundreds of billions of dollars annually, besides damaging health. Trump’s response to this alarming piece of information was – “I don’t believe it”.

He also pushed for the US to pull out of the Paris Agreement. 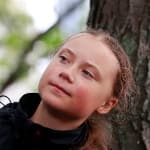 Who is Greta Thunberg?

In August 2018, a 15 year-old-girl from Stockholm had decided to take things in her own hands. She started a civil disobedience movement and was the solitary member of it. She would go to school for days, and reserve her Fridays for protesting outside the Swedish Parliament until the government formulated strict laws to tackle the problem of climate change. She named her resistance ‘Fridays for Future’.

Greta said that she was inspired by the protests staged by American high-school students against gun laws in response to the Parkland shooting in 2018.

A curious mind, Greta had developed an interest in climate change when she was nine years old and in her third grade. Her parents – Svante Thunberg, an actor and Malena Ernman, a very-well known Opera singer – have shown unconditional support to their daughter and the cause of climate change.

In a book, Ernmen mentions that Greta and her younger sister Beata have been diagnosed with Autism and ADHD. Greta attributes her special interest and her uncanny ability to concentrate to her autism. She began doing research on climate change when she was only nine and has stayed on the topic for seven years.

So attached she is to the cause and the belief that a small change can lead to a large difference, something known as the Butterfly Effect, that Greta has stopped eating meat and buying anything that is not absolutely necessary. In 2015, she stopped flying on planes, and a year later her mother followed suit giving up on her international performing career. They have installed solar batteries in their house.

The family grows their own vegetables on a small piece of land outside the city. They have an electric car, which they use only when necessary, and ride bikes for relatively short distances.

It has been a year since Greta started her campaign, and she is still standing rock-solid by her principles – travelling by a boat, instead of a plane, to New York to attend the climate change summit.

She chose to travel by a boat, which will be powered by wind turbines and solar panels, instead of an airplane so as to make her journey have zero carbon footprint.

How did Greta Thunberg become the face of climate activism?

Greta’s solitary civil disobedience has turned into a global phenomenon over the last one year.

Initially, her Fridays for Future was joined by fellow classmates, their parents and school teachers. After it gained media attention, students across Stockholm staged walkouts from schools every Friday in show of support.

Greta’s campaign dilated on the global spectrum in November last year, when students from 24 countries took part in the Friday school strikes.

In February this year, Greta’s ‘Fridays for Future’ transformed into a global phenomenon with students going up in arms to raise awareness about climate change across 30 countries – from Sweden to Brazil, India and the United States.

In March, the phenomenon snowballed with more than 2 million people taking part in protests across 135 countries. Greta was nominated for the Nobel Peace Prize the same month.

In May this year, the 16-year-old was named one of the most influential people by the Time magazine, appearing on its cover. “Now I am speaking to the whole world,” she wrote on Twitter. 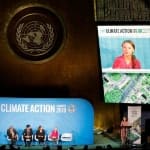 As is widely agreed, acknowledging the issue is the first step in solving it. With her blunt speeches and unwavering efforts, Greta has managed to create awareness, especially amongst the young.

With support from the various NGOs and the scientific society, Greta, and other students her age, have acted as a catalyst for world-wide change. She has galvanized a movement, which does not restrict to her native country. However, whether it drove any change in policy or forced a country to announce additional climate action is debatable. Unfortunately, international decision-making is governed by realpolitik and not by moral force or calls to conscience.

To conclude, I share a piece of local wisdom:

Only when the last tree has withered,
the last fish caught;
The last river poisoned,
Will we realise that we cannot eat money