Upcoming Webinar:Join us for 'The Future Techshot' on Sept 22, 10:30am to gain insights into role of tech in streamlining businesses. Register Now!
you are here: HomeNewsWorld

Trump could be removed from office if at least two-thirds of Senators find him guilty. However, in a House controlled by Republicans — who are still largely backing him — such an impeachment is unlikely

Donald Trump, the President of the United States of America, is facing an impeachment inquiry. This is over allegations of him having sought assistance from Ukraine in a way that could benefit him in getting re-elected next year.

The 73-year-old has been accused of breaking the law by pushing newly-elected Ukrainian President Volodymyr Zelenskyy to dig up information that could be potentially damaging to former US Vice President Joe Biden and his son Hunter. Hunter worked for Burisma, an energy company in the easterner European country. Joe Biden is one of the leading contenders from the rival Democratic Party to take on Trump next year.

Trump and his supporters have alleged that Biden had abused his power to pressure Ukraine to withdraw a criminal investigation that could implicate Hunter. As of September, no evidence had been provided to show any wrongdoing by Hunter or that Joe Biden had taken any action to intentionally benefit his son.

If the impeachment goes through, Trump could be removed from office before his term ends.

How it all started

In August, an anonymous intelligence official -- now the key whistleblower -- wrote a letter expressing concern over a telephonic conversation Trump had with his Ukrainian counterpart on July 25. Another whistleblower with “first-hand” knowledge had come forward in early October.

The whistleblower claimed that Trump had used his position to seek a foreign country’s interference in a way that could impact the 2020 presidential election.

The whistleblowers also alleged that White House officials were "deeply disturbed" by the call and locked all of its details.

While Trump initial promised to release “complete, fully declassified and unredacted transcript”, the White House put out a rough note of Trump’s call. However, it did reveal that the US president had urged Zelenskyy to investigate the Bidens.

The phone conversation happened just after the US blocked the release of around $400 million military aid to Ukraine. In a testimony, a senior official said Trump made it clear that the aid being released was conditional to Biden being probed. The Trump administration has denied this.

Even as the debate on whether Trump’s action was an impeachable offence continued, top Democrat and Speaker of the House of Representatives, Nancy Pelosi, announced on September 24 that a formal impeachment inquiry was being launched.

Pelosi said Trump had betrayed his oath of office. Throughout, Trump has maintained that he has done nothing wrong and termed the inquiry a “witch hunt” and "presidential harassment". 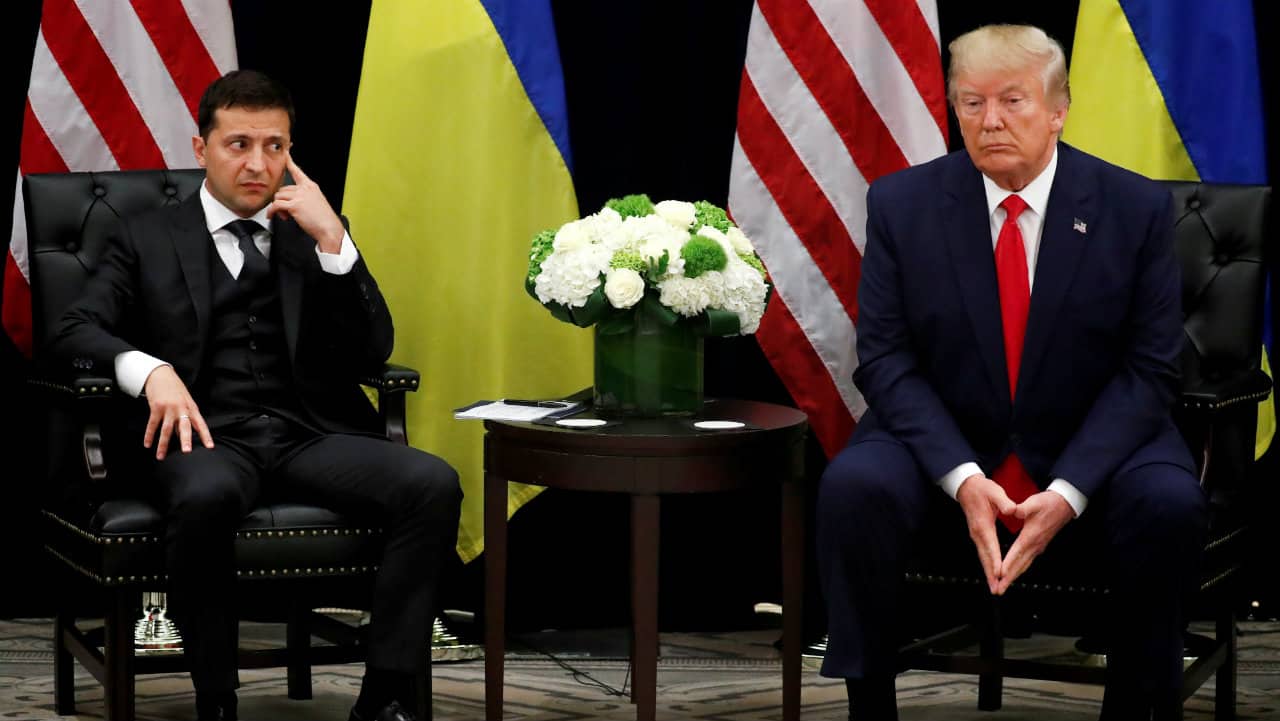 Ukrainian President Volodymyr Zelenskyy (left) and US President Donald Trump (right) during a bilateral meeting on the sidelines of the 74th session of the United Nations General Assembly (UNGA) in New York on September 25. (Image: Reuters)

In this picture: Ukrainian President Volodymyr Zelenskyy (left) and US President Donald Trump (right) during a bilateral meeting on the sidelines of the 74th session of the United Nations General Assembly (UNGA) in New York on September 25. (Image: Reuters)

What is impeachment, the procedure and what happens next?

Impeachment is calling into question the integrity or validity of something. On this, the US Constitution permits Congress -- bicameral legislature of the federal government -- to sack presidents before their term ends if enough lawmakers vote to say that “treason, bribery, or other high crimes and misdemeanours” have been committed.

However, the Constitution does not define what amounts to misdemeanour. This has been one of key points of confrontation.

Democrats have a majority in the House of Representatives (Lower House). If the House passes the article of impeachment, the Senate (Upper House) will be forced to hold a trial.

A trial in the Senate is overseen by the Chief Justice of the US Supreme Court. While lawmakers from the House act as prosecutors, the president has defence lawyers. The Senate acts as the jury -- virtually turning the House into a court room.

The president faces removal from office if at least two-thirds of the Senators find him/her guilty. In such circumstances, there can be no appeal for review and the Vice President takes over.

In the 100-member Senate, the Republicans have a majority with 53 seats. The Democrats have 47 seats. With a very large number of these Republican senators still seemingly backing Trump, getting the requisite numbers to remove him is unlikely at the moment.

Trump is not the first US president to face an impeachment inquiry. Two presidents -- Andrew Johnson (1868) and Bill Clinton (1998) -- were impeached by the House of Representatives. But ultimately, they were acquitted by the Senate and completed their terms in office. Richard Nixon resigned in 1974 to avoid being impeached.

The story so far

Many key witnesses, including senior officials, have testified behind closed doors already.

This includes US' special envoy to Ukraine Kurt Volker, who has submitted text messages and other communication.

US’ Acting Ambassador to Ukraine, Bill Taylor, said Trump had made the release of the military aid conditional on Ukraine opening an investigation into Biden's dealings.

Taylor added that there was "an irregular and informal channel of US policy-making" in the country generally. The Trump administration has denied this. Acting US Ambassador to Ukraine, Bill Taylor, arrives to testify at a closed-door deposition on Capitol Hill in Washington on October 22. (Image: Reuters)

In this picture: Acting US Ambassador to Ukraine, Bill Taylor, arrives to testify at a closed-door deposition on Capitol Hill in Washington on October 22. (Image: Reuters)

The House Committee has sought more testimonies, including that of former National Security Advisor (NSA) John Bolton. Secretary of State Mike Pompeo, who was one of those who reportedly listened in on the Trump-Zelenskyy phone call, has also been served with a summon.

On October 29, Democrats unveiled an eight-page resolution setting out the inquiry’s public phase.

The next phase will move from closed depositions to open hearings where the public will be able to hear testimonies. The White House described the resolution as an "illegitimate sham".

On October 31, the House of Representatives voted to approve the impeachment process against Trump. The 435-member House passed the resolution establishing rules for open hearings and witness questioning by members and staff by 232-196 votes. This was not a vote on impeachment per se. Democrats are hoping to hold a proper vote on impeachment by the end of the year.

So some day, if a Democrat becomes President and the Republicans win the House, even by a tiny margin, they can impeach the President, without due process or fairness or any legal rights. All Republicans must remember what they are witnessing here - a lynching. But we will WIN!

However, as seen in the past, with the public being able to directly access testimonies going forward, the mood of the nation could swing either way.

Until now, Republican senators have backed Trump in large numbers. There is a feeling among Democrats that they should be focusing on defeating Trump in the 2020 election rather than hoping for a very large number of Republicans to abandon Trump.

Other Democrats feel that Trump being acquitted by the Senate could strengthen him further. Yet, many within US’ largest Opposition party believe that impeaching Trump is required to set an example for the future.