How the world is paying for Vladimir Putin's war in Ukraine

Russia is being propelled by a flood of cash that could average $800 million a day this year — and that's just what the commodity superpower is raking in from oil and gas.

Oil pumping jacks, also known as "nodding donkeys", in an oilfield near Neftekamsk, in the Republic of Bashkortostan, Russia, on Thursday, Nov. 19, 2020. The flaring coronavirus outbreak will be a key issue for OPEC+ when it meets at the end of the month to decide on whether to delay a planned easing of cuts early next year. Photographer: Andrey Rudakov/Bloomberg

In early March, as the US and its allies unleashed a wave of sanctions on Russia, President Joe Biden stood in the White House and said they wanted to deal a “powerful blow to Putin’s war machine.”

But as the war in Ukraine approaches its 100th day, that machine is still very much operational. Russia is being propelled by a flood of cash that could average $800 million a day this year — and that's just what the commodity superpower is raking in from oil and gas.

For years, Russia has acted as a vast commodity supermarket selling what an insatiable world has needed: Not just energy, but wheat, nickel, aluminum and palladium too. The invasion of Ukraine has pushed the US and the European Union to rethink this relationship. It’s taking time,  though the EU took a further step this week by hammering out a compromise agreement on Russian oil imports.

Russia is far from unscathed by the sanctions, which have made it a pariah across the developed world. Corporate giants have fled, many walking away from billions of dollars of assets, and the economy is heading for a deep recession. But Putin can ignore this damage for now, because his coffers are overflowing with the revenue from commodities, which have become more lucrative than ever thanks to the surge in global prices driven in part by the war in Ukraine. 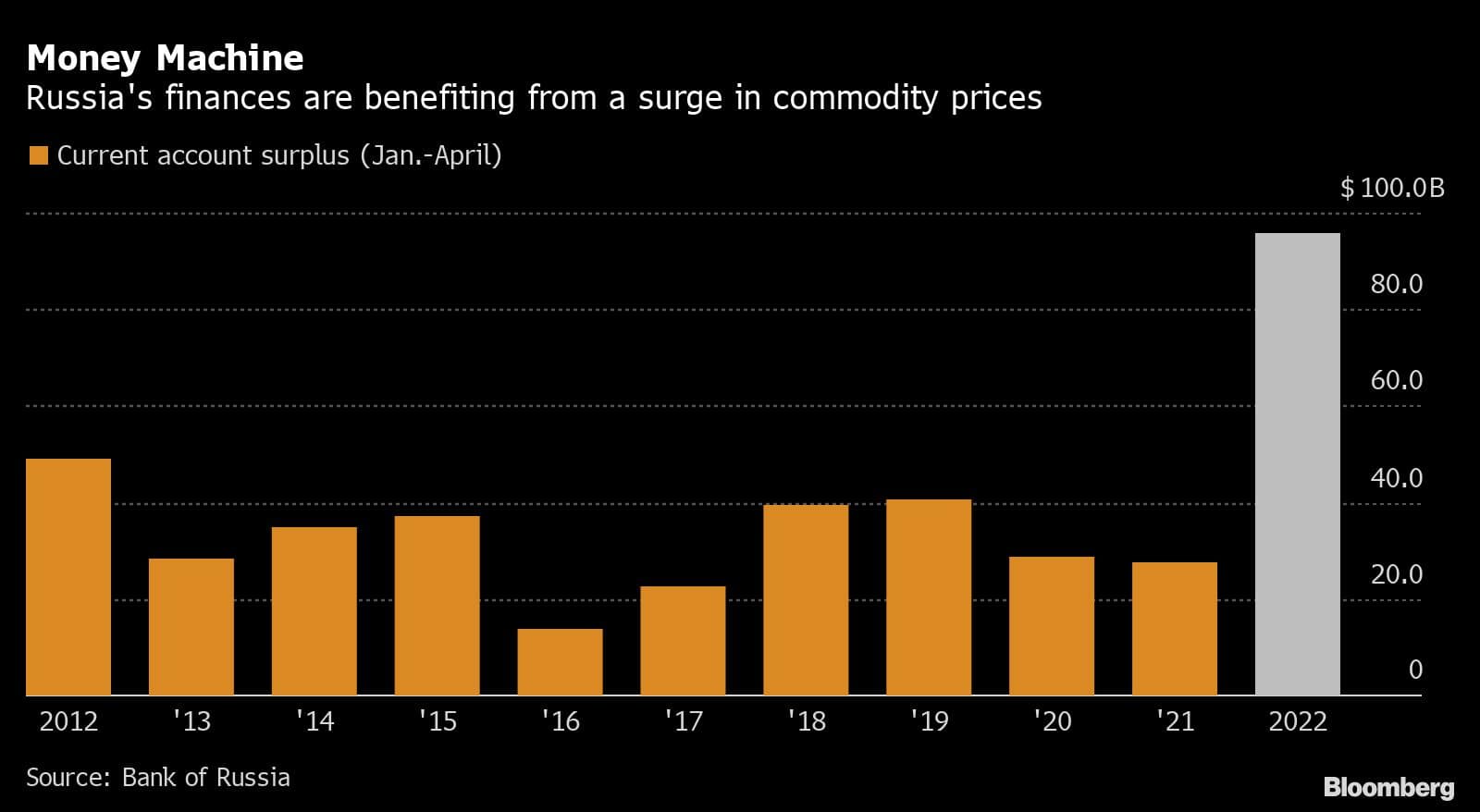 Even with some countries halting or phasing out energy purchases, Russia's oil-and-gas revenue will be about $285 billion this year, according to estimates from Bloomberg Economics based on Economy Ministry projections. That would exceed the 2021 figure by more than one-fifth. Throw in other commodities, and it more than makes up for the $300 billion in foreign reserves frozen as part of the sanctions.

EU leaders know that they should stop buying from Russia and indirectly funding a devastating war on Europe’s doorstep. But for all that ambition, national governments also know there will be repercussions for their own economies.

They agreed this week to pursue a partial ban on Russian oil, paving the way for a sixth package of sanctions, but only after weeks of haggling and division.

“There are always political constraints on the use of sanctions,” said Jeffrey Schott, a senior fellow at the Peterson Institute in Washington. “You want to maximize the pain on your target and minimize the pain on your constituency at home, but unfortunately, that’s easier said than done.”

Lesson #3: only an energy embargo really hurts Russia. Two-thirds of the rise in the c/a surplus this year is from energy exports (blue). Only one-third is from import compression. Maritime sanctions will stop tankers shipping oil out of Russia. We just need the political will... pic.twitter.com/AOnX28i8eB

In the US, officials are debating ways to ratchet up the financial pressure, possibly by helping to impose a cap on the price of Russian oil or slapping sanctions on countries and companies still trading with Russian businesses under restrictions. But such secondary sanctions are deeply divisive and risk damaging relations with other countries.

The US has already banned Russian oil, but Europe is only slowly weaning itself off this dependency. That’s giving Moscow time to find other markets — such as commodity guzzling behemoths China and India — to limit any to damage to export revenue, and its financial war chest.

That means the money is gushing into Russia’s accounts, and the financial figures are a constant reminder to the West that dramatic change is needed. Oil-export revenue alone is up 50% from a year earlier, according to the International Energy Agency. Russia’s top oil producers made their highest combined profit in almost a decade in the first quarter, Moscow-based SberCIB Investment Research estimates. And wheat exports continue — at higher prices — as sanctions on Russian agriculture aren't even being discussed because the world needs its grain.

The current account surplus, the broadest measure of trade in goods and services, more than tripled in the first four months of the year to almost $96 billion. That figure, the highest since at least 1994, mainly reflected a surge in commodity prices, though a plunge in imports under the weight of international sanctions was also a factor.

The ruble has become another symbol used by Putin to project strength. Once mocked by Biden as “rubble” when it initially collapsed in response to the sanctions, it’s since been propped up by Russia to become the world’s best-performing currency against the dollar this year.

Putin has also tried to leverage Russia’s position as a commodity superpower. Amid concern about food shortages, he’s said he’ll allow exports of grain and fertilizer only if the sanctions on his country are lifted.

“If the goal of sanctions was to stop the Russian military, it wasn't realistic,” said Janis Kluge, senior associate for Eastern Europe and Eurasia at the German Institute for International and Security Affairs in Berlin. “It can still fund the war effort, it can still compensate for some of the damage sanctions are doing to its population.” 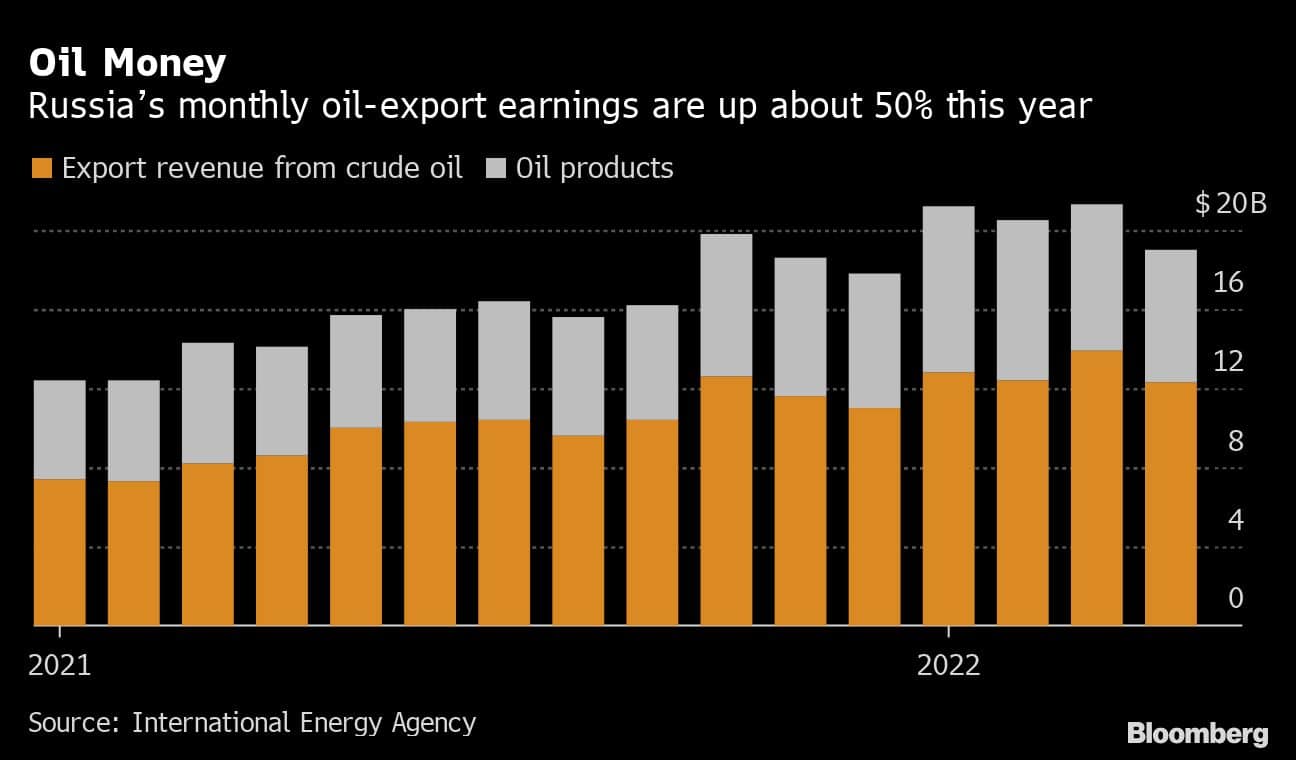 One of the big holes in the sanctions against Russia is the willingness of other nations to continue oil purchases, albeit at a discount in some cases.

Indian refiners purchased more than 40 million barrels of Russian oil between the start of the Ukraine invasion in late February and early May. That’s 20% more than Russia-India flows for the whole of 2021, according to Bloomberg calculations based on trade ministry data. Refiners are seeking private deals instead of public tenders to get Russian barrels cheaper than market prices.

China is also strengthening its energy links with the country, securing cheaper prices by buying oil that’s being shunned elsewhere. It’s boosted imports and is also in talks to replenish its strategic crude stockpiles with Russian oil.

It’s a similar story for steelmakers and coking coal. Imports from Russia rose for a third month in April to more than double last year’s level, according to official custom office data. And some sellers of Russian oil and coal have tried to make things easier for Chinese buyers by allowing transactions in yuan.

“The vast majority of the world is not involved in imposing sanctions,” said Wouter Jacobs, founder and director of the Erasmus Commodity & Trade Centre at the Erasmus University in Rotterdam. “The trade will go on, the need for fuels will be there” and buyers in Asia or the Middle East will step up, he said. 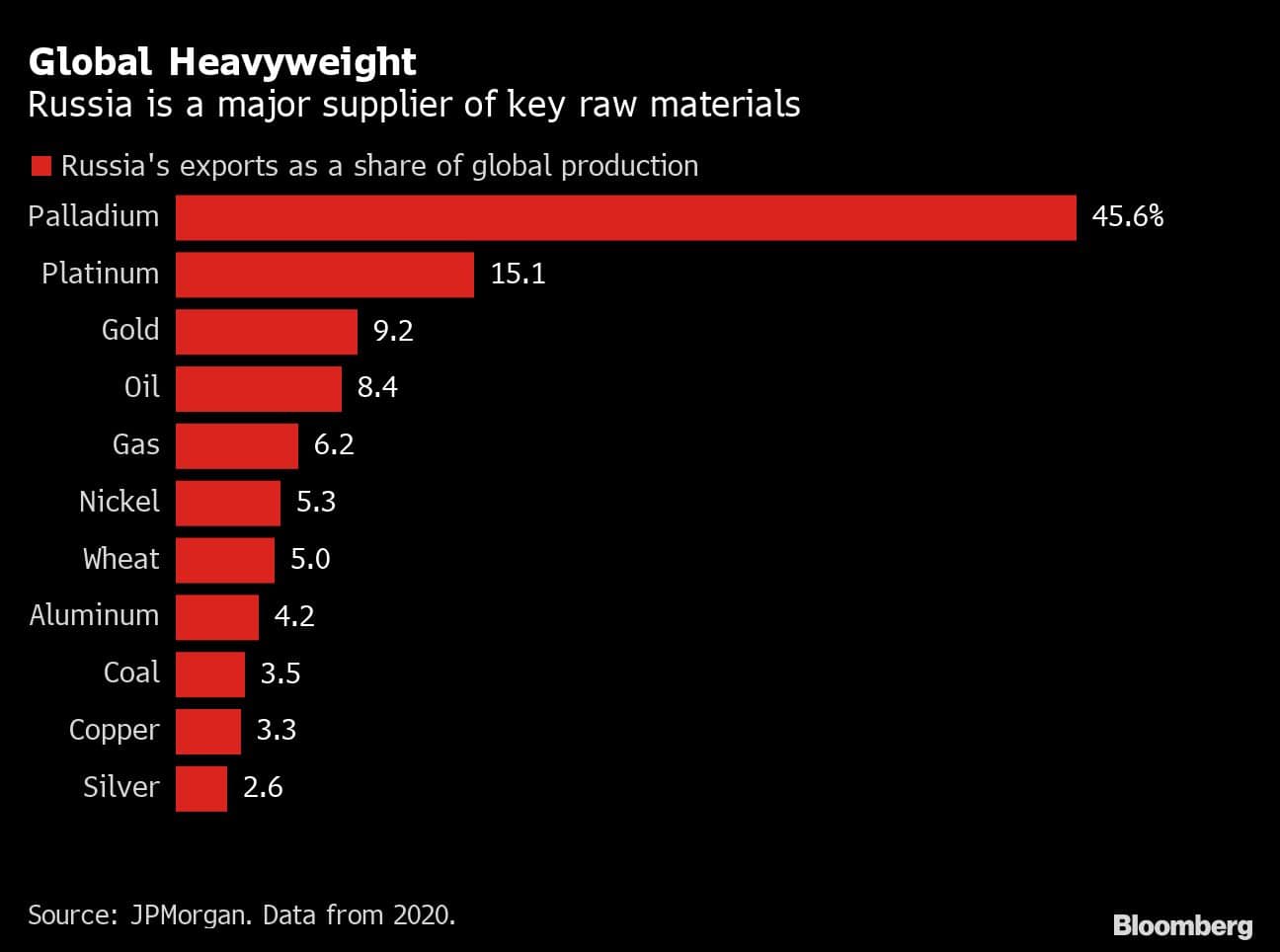 When it comes to gas, Russia has fewer options for diverting supplies, but the countries at the end of pipelines from Russia — some of which run through Ukraine — are also locked into a mutual dependency.

About 40% of the EU’s gas needs are met by Russia, and this will be the bloc’s hardest link to sever. European deliveries even jumped in February and March as the invasion caused a price spike in European gas hubs, making purchases from Russia’s Gazprom PJSC cheaper for most customers with long-term contracts.

Volumes have decreased since then, thanks to warmer weather and record inflows of liquefied natural gas from the US and other countries. There’s also been disruptions because of military activity, and Russia itself halted supplies to Poland, Bulgaria and Finland, which refused Putin’s demand to pay in rubles.

Even as the EU reduces its dependency — Germany says it’s down to 35% from 55% — there are complications at every step. Several big buyers of Russian gas have gone out of their way to keep buying the crucial fuel, and utilities such as Italy’s Eni SpA and Germany’s Uniper SE expect supplies to continue. 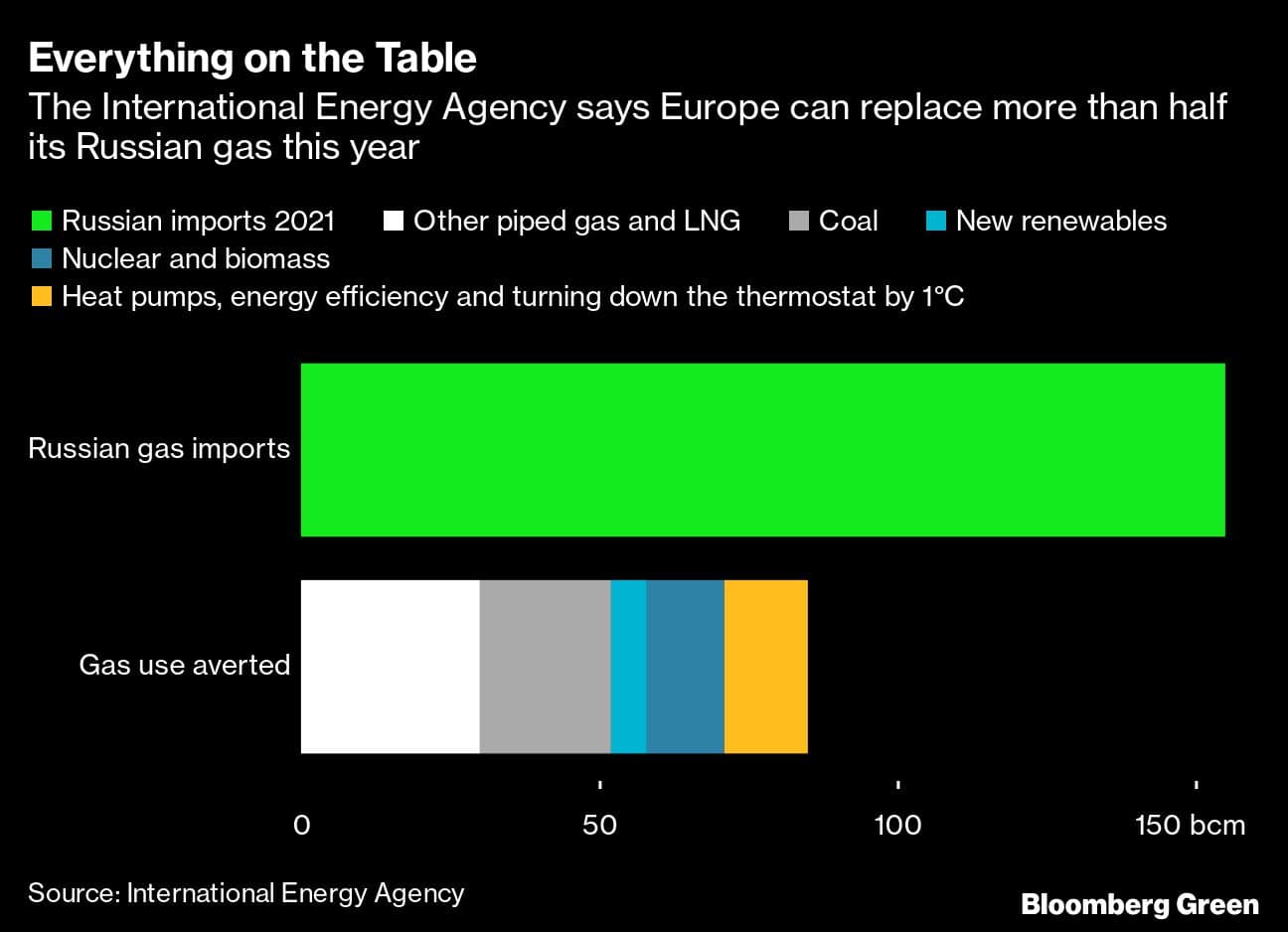 While progress is slow, the direction is only toward more and more restrictions. Even with the uncertain timetable, the pressure on the Russian economy, and Putin’s finances, will eventually mount.

The country’s energy sector is also facing an array of other factors beyond demand, from shipping and insurance restrictions to weak domestic demand. Oil production may drop more than 9% this year, while gas output may decline 5.6%, according to Russian Economy Ministry's base-case outlook.

“In the Kremlin there's some optimism and even surprise that the Russian economy didn't collapse from the onslaught of sanction,” said Tatiana Stanovaya, founder of political consultant R.Politik. “But looking ahead two to three years, there's a lot of questions about how the energy and manufacturing sectors will survive.”
Bloomberg
Tags: #Ukraine #Vladimir Putin #World News
first published: Jun 1, 2022 02:42 pm