Explainer: What’s happening in France, Emmanuel Macron’s gambit and why Turkey is being vocal

French President Emmanuel Macron’s remarks about Islam amid recent attacks in France have led to the Muslim world squaring up against France. But, origins of this new conflict may be more complicated.

French President Emmanuel Macron’s recent remarks about Islam have led to an uproar in the Muslim world, directly placing France against many countries.

This started on October 16, when an 18-year-old Chechen refugee in France beheaded 47-year-old schoolteacher Samuel Paty – days after Paty showed caricatures of Prophet Mohammed to his students.

Macron was quick to respond to the incident later described as an “Islamist terror attack”. Macron said: “We will continue… We will defend the freedom that you taught so well and we will bring secularism.” He said the teacher’s beheading was an attack on “the republic and its values”.

Macron added that France would “not give up cartoons, drawings, even if others back down”.

On October 2, before an audience in a town northwest of Paris – about 20 kilometres from where the teacher was later killed – Macron had talked about his plan to combat "separatism", focusing on Islam in particular. "Islam is a religion which is experiencing a crisis today, all over the world," he said in French, citing tensions between fundamentalism, proper religious projects and politicians.

Macron’s series of comments were perceived as “anti-Islam” in some countries, leading to calls for French brands to be boycotted. Hashtags such as “#BoycottFrenchProducts” and “#MacronApologizeToMuslims” were seen trending on social media for days.

One of the first boycott calls came from Turkey. Turkish President Recep Tayyip Erdogan is known to have taken on the West in the past to stir up patriotic support at the domestic level. But now, he is positioning himself as the voice of Muslims across the world.

While France continues to assert itself in what it considers its sphere of influence, Turkey is using these tensions to its advantage under what geopolitical experts call as the ‘neo-Ottoman foreign policy’.

Turkey has been entangled in multiple conflicts with France in recent months – fighting for dominance in Libya, against French assistance to Lebanon, drilling rights in the eastern Mediterranean and the Nagorno-Karabakh dispute (where Turkey backs Azerbaijan).

“What is Macron's problem with Islam? What is his problem with Muslims?” Erdogan said. “Macron needs some sort of mental treatment. What else is there to say about a head of state who doesn't believe in the freedom of religion and behaves this way against the millions of people of different faiths living in his own country?”

France reacted by recalling its ambassador in Ankara and terming Erdogan’s comments “unacceptable”.

"Excess and rudeness are not a method. We demand that Erdogan change the course of his policy because it is dangerous in every way. We do not enter into unnecessary polemics and do not accept insults," a spokesperson at the Elysée Palace, the French president’s office, told CNN.

Social media was quickly flooded with visuals of supermarkets in Arab countries removing French products from their shelves. Protests against France erupted in many countries, including Bangladesh, Syria, Libya, Iran and Iraq, and some in India. A group also demonstrated outside the French embassy in Moscow, Russia.

The French ambassadors in Jordan and Pakistan were summoned for the countries to register a protest. 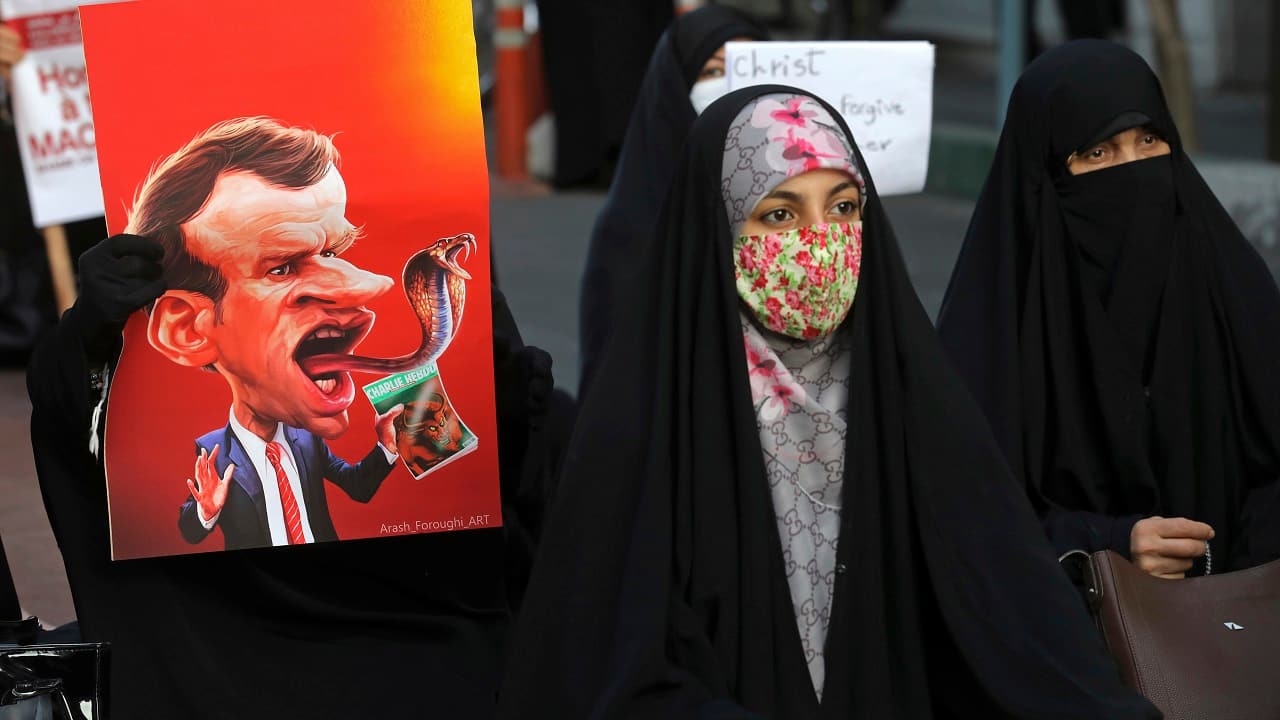 “Hallmark of a leader is he unites human beings, as [Nelson] Mandela did, rather than dividing them. This is a time when Pres[ident] Macron could have put healing touch & denied space to extremists rather than creating further polarisation & marginalisation that inevitably leads to radicalisation,” Pakistani Prime Minister Imran Khan tweeted.

“It is unfortunate that he has chosen to encourage Islamophobia by attacking Islam rather than the terrorists who carry out violence, be it Muslims, White Supremacists or Nazi ideologists. Sadly, President Macron has chosen to deliberately provoke Muslims, incl. his own citizens,” Khan said in another tweet.

But Macron did not budge. “We will not give in, ever. We respect all differences in a spirit of peace. We do not accept hate speech and defend reasonable debate. We will always be on the side of human dignity and universal values,” Macron said in a tweet.

With no sign of any side backing down, the escalations are likely to keep spiralling. On October 29, three people were killed in a knife attack at a church in Nice. Macron said it was an "Islamist terrorist attack".

Macron will be facing re-election in 2022 and his popularity ratings are not currently desirable. An IFOP-Fiducial opinion survey conducted in September, placed Macron’s disapproval rating at 62 percent. Macron’s La République En Marche! (LREM) party has performed poorly in recent local polls. It has also lost absolute majority in the National Assembly.

Experts suggest that he is trying to appeal to France’s right-wing voters, who had supported far-right politicians such as Marine Le Pen in the 2017 election.

India and France are moving closer strategically, as evident from the recent sale of Rafale fighter jets by French company Dassault to the Indian Air Force (IAF). During the induction of the fighter jets in September, Defence Minister Rajnath Singh had said the deal “represents the strong ties between India and France” and that strategic ties between the two countries have strengthened.

On October 28, the Ministry of External Affairs (MEA), in a strongly-worded statement, condemned the terrorist attack that took the life of a French teacher and asserted that there is no justification for terrorism for any reason or under any circumstance.

“I strongly condemn the recent terrorist attacks in France, including today's heinous attack in Nice inside a church. Our deepest and heartfelt condolences to the families of the victims and the people of France. India stands with France in the fight against terrorism,” PM Modi said in a tweet on October 29.
Nachiket Deuskar
Tags: #Emmanuel Macron #France #Politics #World News
first published: Oct 30, 2020 01:22 pm