Explained | Why was the US Embassy in Baghdad targeted? What are its implications?

Reports coming out of Baghdad, the Iraqi capital, suggest that angry protesters are demonstrating outside the United States (US) embassy in the city, bringing to mind the events of the Iranian Revolution and the storming of the US embassy there in 1979.

Then, American officials were held hostage and a standoff between the two governments had ensued. The question now is, while the situation in Baghdad remains tense, is it as bad as 1979?

But first, why the demonstrations?

Demonstrators stormed the US embassy reportedly after the US carried out airstrikes against Iranian-backed Iraqi militia, killing at least 25 fighters. According to reports, the airstrikes were carried out in Western Iraq and eastern Syria on December 29.

The airstrikes were reportedly carried out on the bases of the Shia Kataib Hezbollah group, an Iran-backed organisation active both during the Iraq War and the Syrian Civil War.

According to reports, the US claimed that the airstrikes were carried out in retaliation to a rocket attack on an Iraqi military base that had killed an American civil contractor.

However, officials on all the sides involved are looking at the developments from a wider context of the escalating tensions between the US and Iran, which have been locked in a tussle for months now. What happened at the US embassy?

The protesters stormed the embassy reportedly after funerals were held in Baghdad of the militias killed during the US airstrike.

According to BBC, thousands of mourners, which included senior militia leaders, poured into the Green Zone (GZ). The GZ is where foreign embassies and Iraqi government offices are located.

According to The Guardian, the demonstrators also managed to breach the main gate of the embassy and light fires, also reportedly lobbing bricks and smashing security cameras. Following this, the US responded by firing tear gas to disperse the crowd and reportedly evacuating the embassy.

The BBC report states that while the compound of the embassy itself was not breached, the demonstrators had managed to reach the reception area by scaling the wall.

How has the US reacted?

US President Donald Trump directed his reaction over the developments at Iran, stating in a tweet that Iran "will pay a very big price" for any damage or loss of life. He added that "this is not a warning, it is a threat".

US Defence Secretary Mark Esper said in a statement that around 750 troops from a rapid response unit of the 82nd Airborne Division are prepared to deploy over the next several days to the region.

"This deployment is an appropriate and precautionary action taken in response to increased threat levels against US personnel and facilities, such as we witnessed in Baghdad today," he said.

The deployment comes after the US had already flown in a rapid response team of Marines into Baghdad to reinforce its embassy.

How has Iran reacted?

On its part, Iran has denied Trump's accusation about being involved in the attack on the embassy and condemned the "audacity" of the claim, according to BBC.

Responding to Trump's tweet, Khamenei tweeted, "That guy has tweeted that we (the United States) see Iran responsible for the events in Baghdad & we will respond to Iran. First, you can't do anything. Second, if you were logical— which you're not— you'd see that your crimes in Iraq, Afghanistan... have made nations hate you".

How has Iraq reacted?

Caught in the midst of the two warring factions, Iraq's Prime Minister Adel Abdul Mahdi said the US airstrikes had violated his country's sovereignty.

According to CBS news, Mahdi also wrote on his Facebook account that "any aggression or harassment towards a foreign embassy or mission is an act that will be firmly dealt with by Iraqi security forces, and will be severely punished by the law". 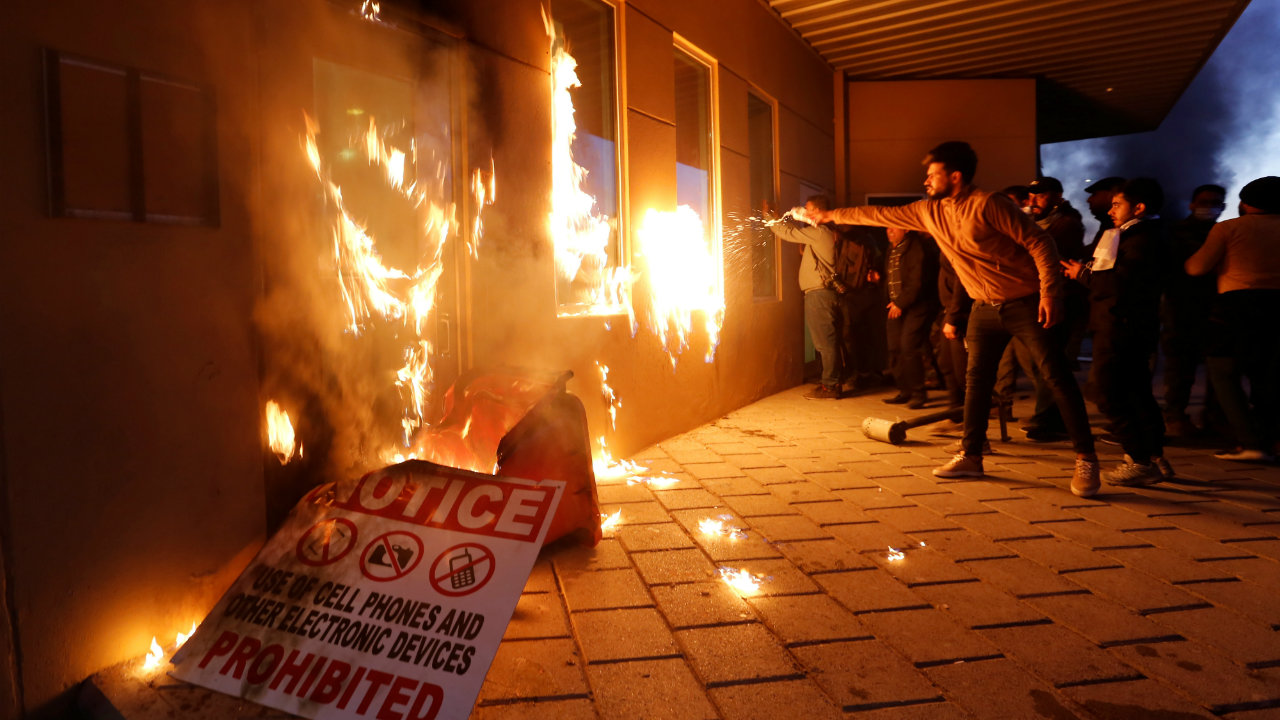 Protesters and militia fighters set fire to a reception room of the U.S. Embassy. (Image: Reuters)

The dramatic turn of events seemed to have mirrored the violent protests of 1979, but observers have pointed out that at that time, the country was going through a revolution.

This time around, while the countries might be the same, the location differs. Moreover, according to reports, even as the muscle-flexing between the leaders of Iran and the US might continue, the situation on the ground seems to be in control.

The Baghdad incident also comes seven years after the 2012 attack by armed militants on the US diplomatic compound in Benghazi, Libya, that resulted in the death of the US ambassador and three other Americans and led to multiple congressional investigations.

What are the wider implications?

The Baghdad incident might be just the latest in the ongoing US-Iran tussle. According to experts, the incident suggests that Trump's strategy of putting economic pressure on Iran to force the country into a broader nuclear deal might not be working as he had hoped.

The protest also highlights the limitations of the American military mission in Iraq, and the Middle East. Robert Ford, a former US diplomat who had served in Baghdad, told CNBC TV18 that the Americans might have miscalculated the airstrikes and the reactions it would garner.

"The Americans fell into the Iranian trap," Ford said, reasoning that the Iraqi anger turned towards the US post the strikes, diverting from Iran.