Selected Articles from
Financial Times on Moneycontrol Pro
Webinar :Register now for webinar on 'Trade BankNifty in just 15 minutes a day' - By Asmita Patel
you are here: HomeNewsWorld

The recession has been ugly. It has wiped away more than a year of economic output and more than five years of jobs growth. The workforce is now smaller than it was a year before Trump first took office.

It's still not clear yet if the next US president will be incumbent Donald Trump or Democratic challenger Joe Biden, but whoever triumphs will face monumental challenges on the economic front.

The recession has been ugly. It has wiped away more than a year of economic output and more than five years of jobs growth.

The workforce is now smaller than it was a year before Trump first took office. 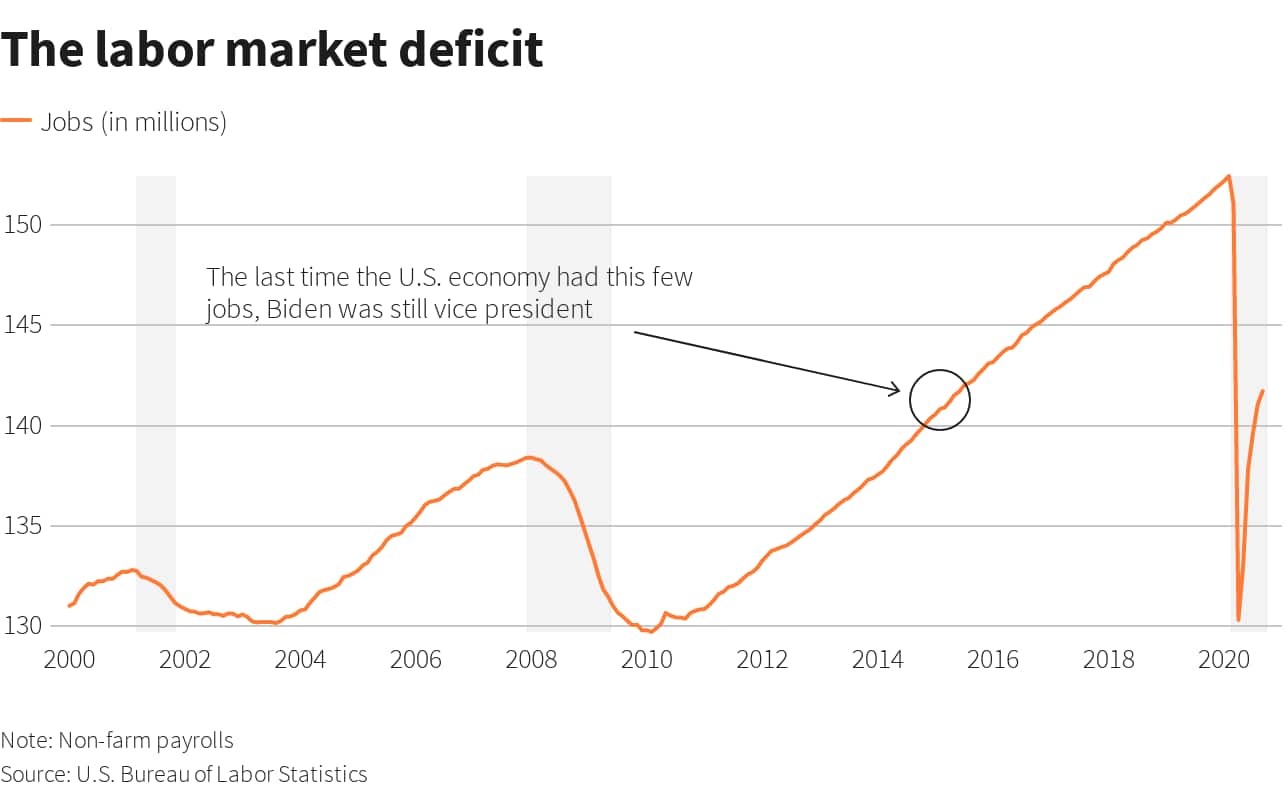 One bright spot - consumer spending - is stronger than it was right after the pandemic exploded in March, but still only back to where it was last June.

Housing prices are on the rise, which is a great thing for US homeowners but at the same time is worsening the affordability crisis for aspiring home buyers renters.

Manufacturing activity - a key concern in the Midwestern battleground states - has rebounded, but manufacturing employment is in worse shape than employment overall. And the coronavirus is still surging across most of the United States. Nearly 6,000 people died last week, and there's growing concern that the US might need to reinstate lockdowns that happened across Europe in order to get it under control.

But despite signs the economy has begun to slow again amid another viral onslaught, "it is almost certain that the economy will get better over the course of 2021," says Jason Furman, a key economic advisor to Barack Obama, the last US president elected during a time of economic turmoil.

Late 2021 is still a long ways away, not just in political terms but for those living paycheck to paycheck, or out of work.

Federal Reserve policymaker projections put unemployment at 5.5 percent by the end of next year - worse than the 4.7 percent when Trump was first elected, but an improvement over the current 7.9 percent.

Beyond jobs lost and economic output curtailed, either Trump or Biden will face a list of long-term headwinds including deepening inequality, rising federal debt and tattered international trade relations.

In the run-up to the election, Trump consistently polled better than Biden on his ability to create jobs and manage the economy, if not the virus.

But even with the election outcome uncertain, and likely to remain so for some time amid legal challenges, stock market investors like what they see.

That's partly because Republicans look likely to keep their hold on the Senate, leaving policy priorities relatively unchanged if it's Trump emerging the winner, or as preventive force to a president Biden from trying to push through any big policy changes should he come out on top in the ballot box.

It's also because Senate Majority Leader Republican Mitch McConnell signaled Wednesday he was open to a new coronavirus aid bill in the "lame duck" session before the elected members of Senate and US House of Representatives are sworn in.

For the still-weak economy, a lot will depend on the timing, size and shape of a pandemic relief package, which eluded lawmakers and the White House before the election.

A more modest fiscal package could mean "the growth outlook and corporate profits may not be as vigorous as hoped," said James Knightley, chief international economist for ING.

A Biden presidency with a majority Republican Senate could offer the worst case for the economy in 2021 because Republicans are likely to oppose a substantial stimulus package, said Matthew Luzzetti, chief US economist at Deutsche Bank.

That would be bad news for the millions of low- and middle-income Americans out of work and struggling to find jobs in sectors such as travel and entertainment that are likely to remain moribund until the pandemic is under better control.

Whatever the election outcome, any aid package should provide additional assistance for the unemployed, help for small businesses and assistance for state and local governments, to keep economic momentum going, Luzzetti said.