In 1918, cities that committed earlier and longer to interventions had relatively larger gains in manufacturing employment and output and bank assets in 1919 and into the next few years, a new study from the Federal Reserve and MIT shows

As the first local influenza deaths were counted in the fall of 1918, officials in Minneapolis moved quickly — more aggressively than even state health officials thought was wise — and shut down the city. They closed schools, churches, theaters and pool halls, effective midnight on October 12.

Across the Mississippi River, St. Paul remained largely open into November, with its leaders confident they had the epidemic under control. Fully three weeks after Minneapolis — with The St. Paul Pioneer Press pleading “In Heaven’s Name Do Something!” — St. Paul ordered sweeping closures, too.

Both cities, relative to the worst-hit parts of the country, escaped steep death tolls. But the mortality rate in Minneapolis was considerably lower than in St. Paul. And as researchers today look back on those interventions, it appears the economy in Minneapolis emerged stronger, too.

The comparison between the Twin Cities is instructive today not just for what it tells us about the health benefits of social distancing, but also for what it says about any economic costs that come with it.

In 1918, cities that committed earlier and longer to interventions like banning public gatherings and closing schools didn’t fare worse for disrupting their economies for longer. Many of those cities actually had relatively larger gains in manufacturing employment, manufacturing output and bank assets in 1919 and into the next few years, according to a new study from researchers at the Federal Reserve and Massachusetts Institute of Technology. This is particularly clear among Western cities that had more time to prepare for a pandemic that hit the East Coast first.

For cities with the most aggressive interventions, there’s no trade-off apparent in this data between saving lives and hurting the economy.

“If anything, these places do better,” said Emil Verner, an economist at MIT, who wrote the paper with Sergio Correia and Stephan Luck of the Fed.

The reasons this would be true aren’t particularly hard to understand. But the same logic has been questioned today by elected officials and commentators who fear that social distancing in response to the coronavirus may not be worth the costs in shuttered businesses and unprecedented unemployment rolls.

This second point was particularly important in 1918, because that pandemic devastated prime-working-age adults.

“It was a very gendered economy where the breadwinners were almost exclusively men,” said Howard Markel, who directs the Center for the History of Medicine at the University of Michigan. “The fewer men that died who could then go and pursue their work once it ended meant that those families were better off than those that lost that breadwinner, who would then become potentially destitute.”

Markel and a separate team of researchers previously compiled the historical records that tell us today how cities reacted to the 1918 influenza, and how many deaths were counted as it wore on. Their earlier work showed that cities that adopted interventions early, held them in place longer and layered them together — for instance, closing schools, banning public gatherings and isolating sick residents — were more successful managing the epidemic and reducing fatalities.

The new research by Verner and colleagues adds economic data to that record. Of course, some cities had stronger economies going into the pandemic, or were affected disproportionately by economic shocks that had little to do with the influenza outbreak. West Coast cities, for instance, were more affected by agricultural booms and busts around the end of World War I. But the underlying pattern the researchers found held even when they took into account economic and demographic differences between cities.

One simpler way to see this is to compare cities like Minneapolis and St. Paul that are geographically close and were relatively similar in other ways at the time. On the West Coast, even as cities had more time to prepare, Los Angeles declared a state of emergency and banned all public gatherings early on, while San Francisco focused instead on urging residents to wear masks in public, which proved ineffective. Pittsburgh delayed closing its schools longer than other Eastern industrial cities like Cleveland, and it fared worse. 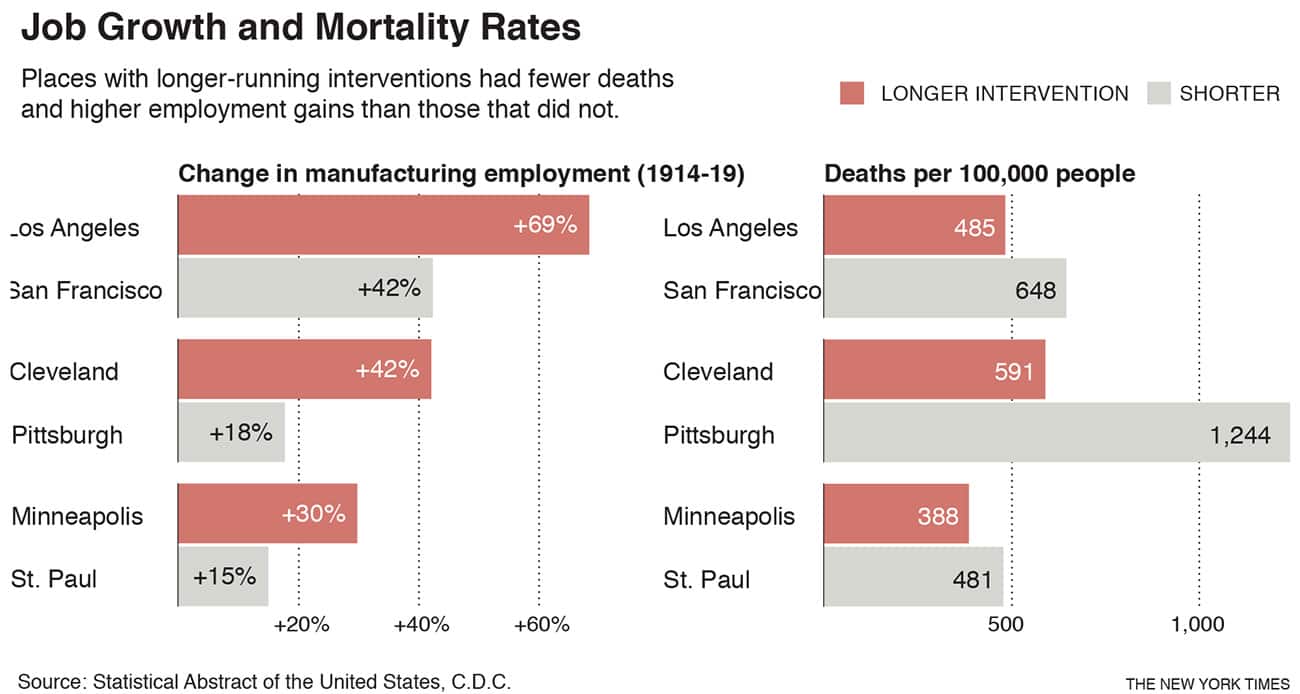 In local news accounts at the time compiled by Markel and colleagues, there are plenty of examples of business owners who objected to the closings, even lobbying to roll them back. In Atlanta, theaters and movie houses complained of their losses, as did retailers in Columbus, Ohio. Cleveland hotels lost an estimated $200,000. In Philadelphia, saloons claimed they lost $350,000.

But there’s less evidence that people were worried about lasting economic damage from those public health measures, as some Americans are today, including, at times, the president. Americans in 1918 were accustomed to more localized boom-and-bust economies, Markel said. They didn’t have 401(k)s they were checking daily, or instantaneous access to news about the stock market.

In Minneapolis at the time, the newspapers reflected few such dire concerns about the economy, especially as the good news of the end of World War I in November competed with stories about the pandemic.

“The city was almost schizophrenic: People were celebrating these victories while they were clearly worried about the fact that people were getting ill,” said Iric Nathanson, who writes about the history of the Twin Cities and has researched the 1918 pandemic there. “But there were never screaming headlines about the flu epidemic in the paper. I don’t think anybody had assumed there was going to be a long-term economic fallout.”

The outlook today is clearly grimmer. The economy is now global, leaving local communities susceptible to coronavirus effects on the other side of the world. And so much of the modern service-sector economy in the U.S. is contingent on people getting together — on planes, in restaurants, at theatres, in tourism hubs.

But this lesson from 1918 is probably still true today: It’s the pandemic that really hurts the economy, not the things we do to try to contain it.