To create the specialized light, EUVs vaporize molten tin with lasers, then use mirrors to focus the radiance into thinner wavelengths.

The machines needed to make the world’s most advanced semiconductors are miracles of modern engineering. Known as extreme ultraviolet lithography systems, or EUVs, they bathe silicon wafers with waves of light invisible to the human eye, burning patterns into materials on the wafer’s surface that need to be exact within a few nanometers. To create the specialized light, EUVs vaporize molten tin with lasers, then use mirrors to focus the radiance into thinner wavelengths. Only one company in the world— ASML Holding NV of the Netherlands—makes the bus-size devices, which cost more than $150 million and consist of 100,000 separate components.

EUVs are also a prime illustration of how the push to make semiconductors that are smaller, more capable, and more energy-efficient is leading to manufacturing processes that are more complicated and energy-intensive. Each machine is rated to consume about 1 megawatt of electricity, about 10 times more than previous generations of equipment. With no alternative available to make the most advanced kinds of semiconductors, the chip industry is a potentially significant stumbling block to the drive to reduce global carbon emissions. 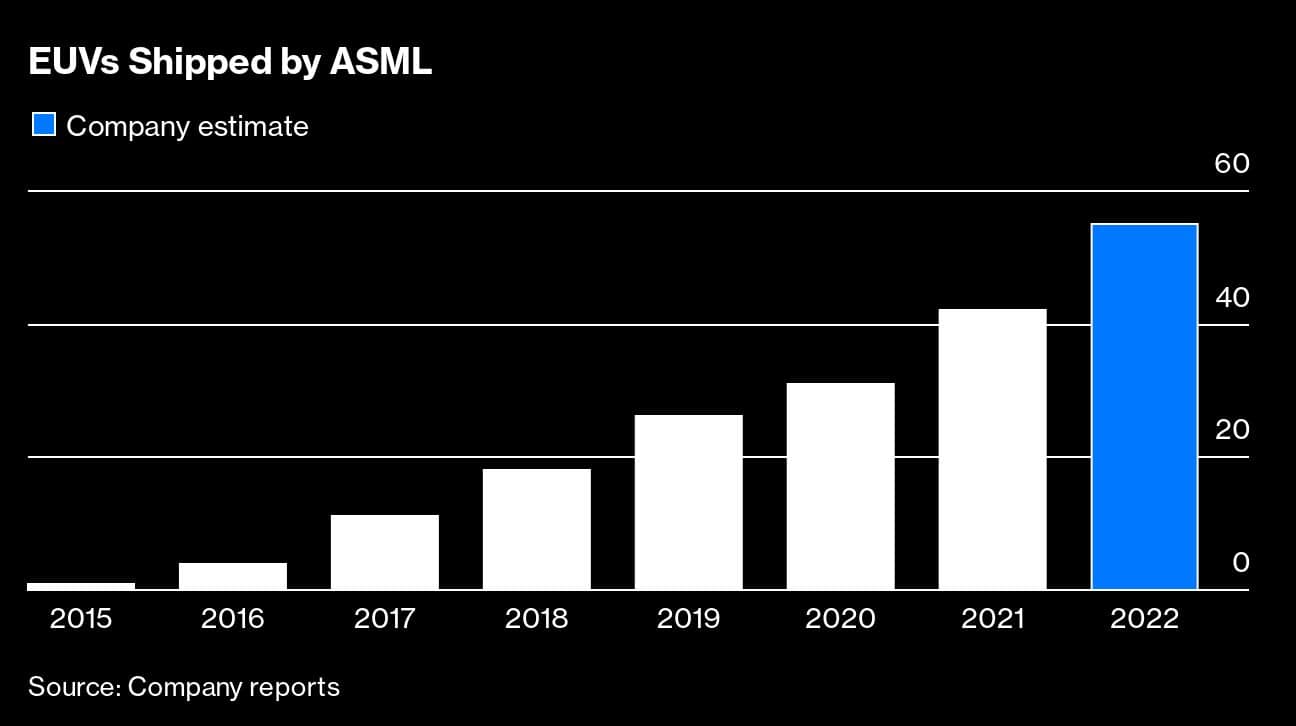 No one has purchased more EUVs than Taiwan Semiconductor Manufacturing Co., the world’s largest supplier of outsourced chips. It currently has more than 80 and is in the midst of installing a new generation of the machines as part of a $20 billion chip foundry in Tainan, a city in southern Taiwan. Because of the vast amount of power needed to run EUVs, TSMC is expected to soon consume more energy than the entire 21 million-person population of Sri Lanka. In 2020 the company accounted for about 6% of Taiwan’s overall energy consumption. It’s expected to use 12.5% of it by 2025.

In addition to TSMC, Micron Technology Inc., a major memory chip producer, plans to use at least one EUV at its production site in Taichung, about a two-hour drive south of Taipei, the Taiwanese capital. Within three years, a quarter of all chip fabrication in Taiwan’s foundries will need EUVs to function, according to Bloomberg Intelligence analyst Charles Shum.

Liang Chi-yuan, chair professor of management at National Central University in Taoyuan City, says Taiwan won’t have enough electricity capacity to accommodate its semiconductor industry unless chipmakers start building their own power plants. The island’s operating reserve, a measure of additional capacity it has to deal with unforeseen spikes in demand or disruptions to supply, is likely to fall below the 10% margin the government deems an “adequate” supply at some point this year, Liang says.

Chipmakers are vital to Taiwan’s economy, and fallout from increased competition for electricity may be felt more acutely in other areas. “Power shortage will for sure happen,” says Tracy Cheng, a climate and energy campaigner at Greenpeace. “TSMC will take up most of Taiwan’s energy supply, and that will hurt other sectors.”

A crucial factor in how much of an impact TSMC’s manufacturing has on the environment is where all that power comes from. “In places where chip-manufacturing factories are operating such highly power-consuming equipment, renewable energy becomes especially essential and urgent,” says Lars-Ake Ragnarsson, head of the sustainability program at research company Imec. Taiwan, though, is heavily reliant on fossil fuels. In 2016 its government set a goal of deriving 20% of electricity from renewable sources by 2025 through an ambitious build-out of solar power and offshore wind capacity. But its latest energy review, released in July, showed that only 6% of its power came from renewable sources as of the end of 2021, prompting officials to downgrade their 2025 target to 15%.

South Korea, home to chipmaking giant Samsung Electronics Co., faces a similar challenge. The company runs six semiconductor manufacturing sites in the country and accounted for 3% of its power consumption in 2021. As it seeks to compete more directly with TSMC by manufacturing chips for external clients, Samsung is looking to expand its own use of EUVs. The company has fewer of the machines than TSMC, though it doesn’t say publicly how many it has. In early June, head of Samsung Group Jay Lee traveled to the Netherlands to line up new deals with ASML.

More than 60% of South Korea’s electricity still comes from burning coal and natural gas. The country is aiming to reduce carbon emissions by 40% from its 2018 level by 2030. Such an effort would require raising the share of South Korea’s energy that comes from renewables to well above 30% by 2030, up from 7.5% in 2021.

Intel Corp., the main US-based chipmaker, does better than its Asian peers on renewable energy, partially because it has access to green energy at its facilities in Arizona, New Mexico, and Oregon. The company got 80% of its electricity from renewable sources in 2021, up from 71% the year before. But its overall electricity use is also increasing significantly because of advanced manufacturing techniques.

Around the globe, governments that profess a desire to lower carbon emissions are also eager to build domestic semiconductor manufacturing capacity to defend against supply chain shocks and geopolitical disruptions. The US recently passed a $52 billion plan to bring chip production capacities onshore, and the European Chips Act encompasses $49 billion in investments to revive the industry within the European Union. Environmental impact doesn’t seem to have been an important consideration in either jurisdiction. “Although there are conditions to be met for companies to obtain funds, none of these acts have yet to specify climate-related targets,” says David Kang, head of Japan and South Korea research at BloombergNEF.

ASML is experiencing unprecedented demand. Bloomberg Intelligence senior analyst Masahiro Wakasugi predicts the company could see more than a 30% increase in annual sales in 2023, to about $26 billion, despite pressure from the US to stop providing to China even the equipment to make less advanced chips. Chief Financial Officer Roger Dassen said in April that ASML is investigating the possibility of increasing shipments to 90 of its EUVs in 2025, from an original target of 70 units.

Finding ways to manufacture chips in more environmentally sustainable ways may be possible, but there’s little appetite for slowing down the industry’s expansion. “The pace and time are running out in general. There are so many items we have to address, and it takes time and costs to do that,” says Imec’s Ragnarsson. “Our industry is growing very quickly. Our problem will get worse if we don’t do anything.”
Bloomberg
Tags: #chipmaking #World News
first published: Aug 31, 2022 07:36 am