The unknown man, now fondly known as the 'bitcoin sign guy', is receiving a lot of love from the cryptocurrency community and is being showered with a lot of bitcoins

As US Federal Reserve chief Janet Yellen gave her testimony on Wednesday, a man sitting behind her raised a signpost saying 'Buy Bitcoin' during the live telecast.

The unknown man, now fondly known as the 'bitcoin sign guy', is receiving a lot of love from the cryptocurrency community and is showered with praises.

Good job, anonymous sign guy. May many BTC rain down upon you. pic.twitter.com/svX8sr5xmh

After this harmless stunt, a friend of his shared a picture of him holding a yellow notepad that had 'buy bitcoin' scribbled on it, along with his bitcoin wallet address. 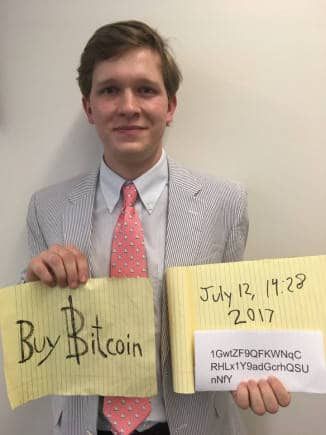 The crypto-community showed no restraint in rewarding him, in fact, many sent him bitcoins as a reward, one can say, for photobombing Janet Yellen.

At the time of filing this report, bitcoins worth about USD 11,000 (4.5 BTC) were sent to him by generous donors, and it has not stopped yet.

There has been a steady pullback in major cryptocurrencies since June, but they saw a a sharp correction since Monday — wherein the investors lost USD 16 billion. Cryptocurrencies have officially entered a bear market, going by conventional definition.