As Pakistan goes to polls today, here's a look at what's at stake

Pakistan’s history has been marred by episodic tiffs between the elected government and the military establishment, resulting in ambivalent policies, and an atmosphere of perpetual intrigue where civilian legislators have been made to feel beholden to the military for their continuance in office.

Pakistan goes to polls today to elect a new government. No prime minister in the country’s history has ever completed a five-year term. What is also noteworthy is that, if all goes to plan, this will only be the second transfer of power between two civilian governments after a full term.

In its 70-year history, Pakistan has alternated between civilian and military governments. It is imperative that after spending the better part of a century torn by strife, extremism and internal instability, the seeds of democracy take root in one of the largest Muslim-majority nations in the world. Pakistan is also a nuclear state, and is strategically located at the crossroads of the Indian subcontinent, the Middle East and Central Asia.

The campaign trail for the elections has been a bloody affair. There have been allegations of interference by the military, silencing of the media, political parties flirting with extremist ideologues, all of which culminated in a series of attacks on candidates, including one that claimed 151 lives.

Election to provincial assemblies will be held on the same day. Balochistan, Khyber Pakhtunkhwa, Sindh and Punjab will elect leaders to their provincial senates as well as the National Assembly on Wednesday.

The Parliament of Pakistan, also known as the Majlis ê Shura Pākistan, is a bicameral federal legislature. The lower house of Parliament consists of 342 members, of which 10 are reserved for religious minorities, and 60 for women.

Like the electoral system followed in India, polls in Pakistan are fought according to the first-past-the-post (FPTP) system. In the FPTP method, voters indicate their preference for a single candidate, and the one with the most votes wins. To achieve a majority in the House and form a government, a party needs to clinch 172 seats in the lower house, also known as the Qaumi Assembly. The incumbent coalition had secured 199 seats, of which Pakistan Muslim League (Nawaz) won 178 seats.

Data furnished by the Election Commission of Pakistan (ECP) reveals that this election will be hotly contested. At least 3,459 candidates are in the fray for 342 seats in the National Assembly, while 8,396 will contest for seats in the four provincial assemblies.

Lay of the land 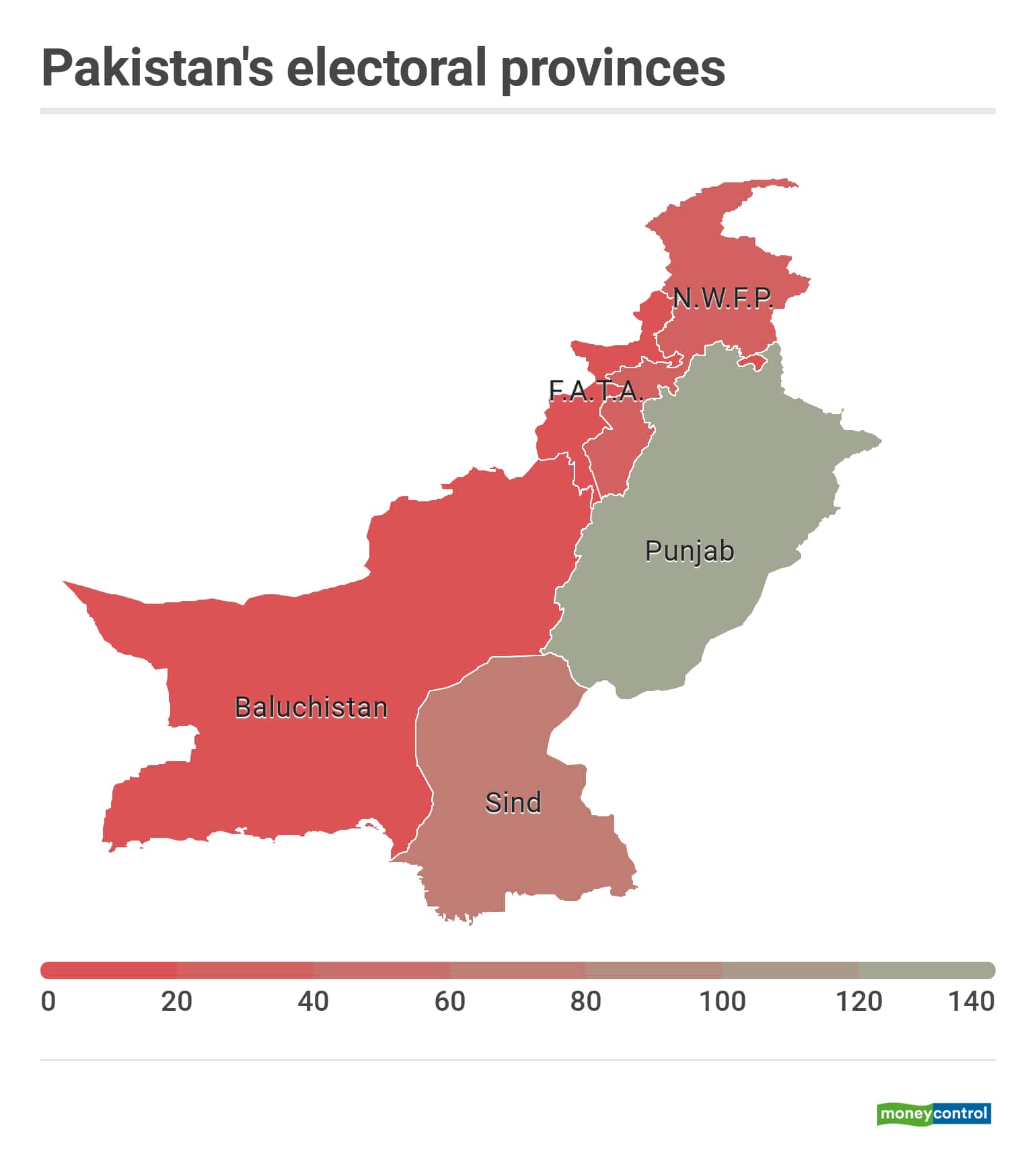 The National Assembly has 272 directly elected seats. Cumulatively, 70 seats are reserved for women and religious minorities. Nawaz Sharif’s homeland, Punjab, is the most populous province, and sends 141 representatives to the National Assembly.

Sharif’s indictment in corruption cases has cast a cloud over his popularity. Imran Khan’s Pakistan Tehreek-e-Insaf (PTI) party will sense an opportunity to make inroads into the PML(N)’s stronghold to stake a claim to form the government. The PTI performed well in the Khyber Pakhtunkhwa province in the previous election. The Pakistan People's Party (PPP) has historically performed well in Sindh, and also rural constituencies in other provinces.

What is at stake?

Pakistan’s history has been marred by episodic tiffs between the elected government and the military establishment, resulting in ambivalent policies, and an atmosphere of perpetual intrigue where civilian legislators have been made to feel beholden to the military for their continuance in office. Nawaz Sharif is no stranger to the wiles of the military, having been deposed in a bloodless coup by the then-Chief of Army Staff, General Pervez Musharraf, in 1999.

The latter end of the incumbent government’s tenure was marked by a falling out between the ruling coalition led by the PML(N) and the military. The mood has been fraught with tension, with the PML(N) accusing the military of a crackdown, aided by the cooperation of a pliant judiciary. Nearly 17,000 party members are facing criminal charges. Former Prime Minister Nawaz Sharif and his daughter, Maryam, are in jail. There are also reports that the military is employing strong-arm tactics to steer the electoral process in favour of candidates aligned with their worldview. The Human Rights Commission of Pakistan went on record to say there have been "blatant, aggressive and unabashed attempts" to manipulate elections, with "alarming implications for Pakistan's transition to an effective democracy".

Pakistan’s generals have ruled the country for the better part of a century, either directly, or by proxy, propping up governments that were malleable to inputs from the military.

Censorship of newspapers, TV channels and social media had picked up in the months leading to the polls. However, the origin of these restrictions on political opinion is hard to pinpoint since the military establishment is at loggerheads with the party in power. This has led to a blanket ban on certain media organizations whose editorial policies are inimical to the interests of parties staking a claim to power, both through direct involvement in the elections, and also covertly.

Dawn, Pakistan’s largest English-language newspaper, has disappeared from newsstands. Ironically, the newspaper, that has earned the ire of the powers-that-be, was founded by Mohammad Ali Jinnah, the first Governor-General of Pakistan. Dawn had for long been considered an establishment newspaper owing to its roots that can be traced back to the freedom struggle, and the creation of the modern nation state of Pakistan. But not anymore.

The establishment has harassed reporters, intimidated editors and banned hawkers from distributing the newspaper in many parts of the country. In order to silence the newspaper, advertisers have also been asked to refrain from promoting their wares in Dawn.

Factual and uncompromising reporting had helped the newspaper claim a loyal following among the nation’s English-speaking elite. The very virtues that shaped its identity are now liabilities in its quest for survival. The present standoff with the establishment was a long time coming, but the situation boiled over when the newspaper adhered to the journalistic code by refusing to divulge sources.

Other media organizations have also been caught in the headlights. The prominent television station Geo TV and its sister concern, the Urdu-language daily, Jang, were subject to stinging financial pressure that forced them to delay payments to staff for three months. However, a compromise seems to have been worked out. The impact on news coverage remains to be seen.

Independent journalists and bloggers have also been targeted. The authorities have taken to surveillance of social media to curb ‘anti-state propaganda’.

Pakistan continues to remain an ally of the United States, but relations have been estranged since Donald Trump took over the presidency. Trade relations with China have picked up. Pakistan is an integral part of China’s ambitious Belt and Road Initiative.

The United States has foolishly given Pakistan more than 33 billion dollars in aid over the last 15 years, and they have given us nothing but lies & deceit, thinking of our leaders as fools. They give safe haven to the terrorists we hunt in Afghanistan, with little help. No more!

Despite, gradual gains in institution building over the years, Pakistan has always been at risk of imploding. The country was a spectator as the United States waged a war in neighbouring Afghanistan. Osama bin Laden, the mastermind of the 9/11 terror attacks, was traced to a plot in a heavily fortified military colony in Pakistan’s Abbottabad, where he was killed by Navy Seals.

The relationship between the military and terrorist organizations operating out of Pakistani soil is hazy. The country has sheltered militant groups that have attacked India, and also targeted religious minorities in Pakistan. The rise of extremism will be a concern for foreign investors in Pakistan.

However, Pakistan’s military establishment is seen as a bulwark against elements like the Islamic State (IS). Among other things, the elections will be a referendum on the role of the army in public life.

In spite of the country’s strategic location as the bridge between south Asia and the Middle East, Pakistan’s economy has never really taken off. Sluggish growth owing to rampant corruption has resulted in high unemployment. 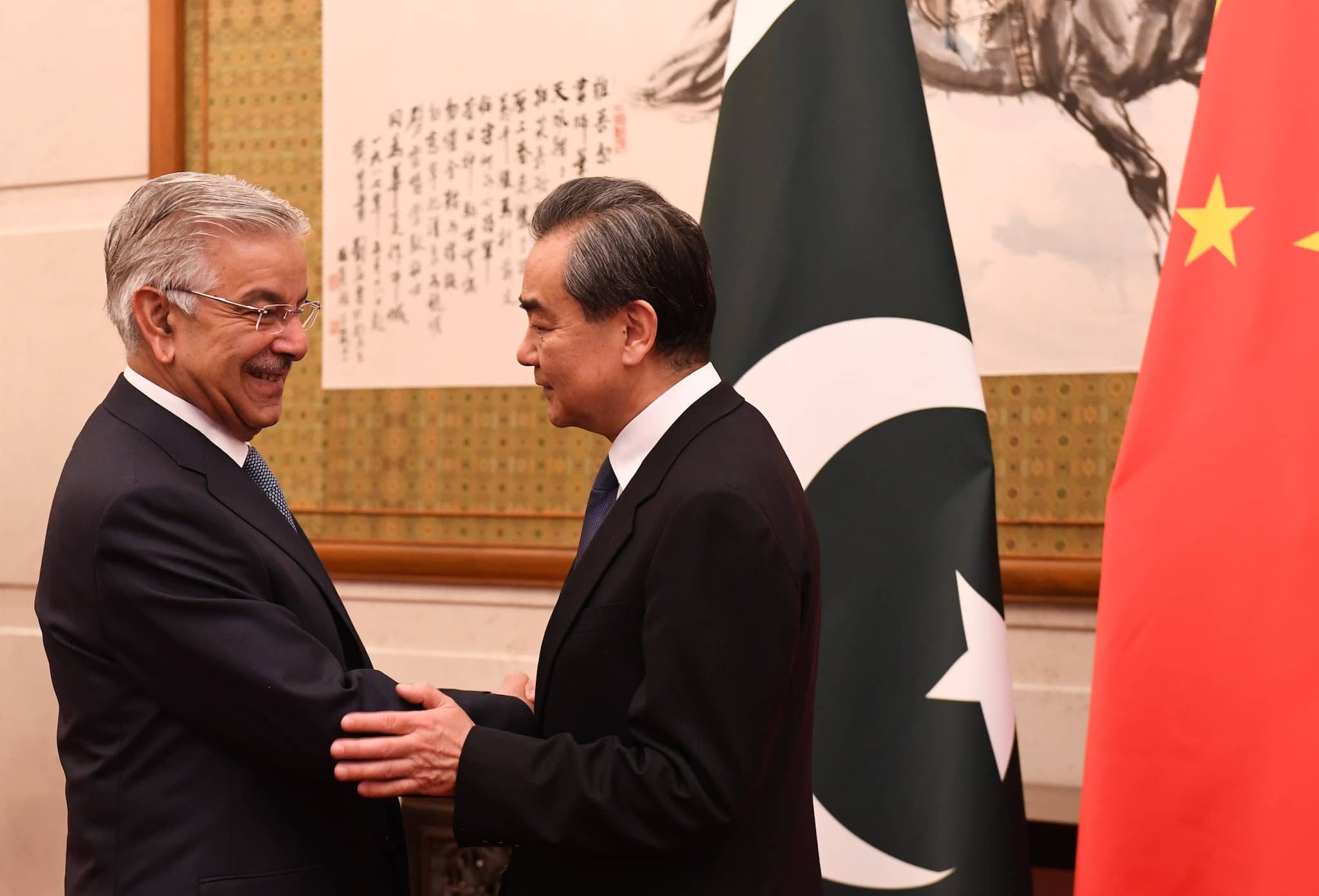 The perception that Pakistan is not doing enough to combat terrorist organizations operating from its territory has caused Western allies to reduce aid, or suspend economic support altogether. This has resulted in Pakistan turning to its all-weather ally China to fund infrastructure projects and sustain its economy. However, the debt accumulated by borrowing from China has reached worrisome proportions.

Pakistan was recently added to the Financial Action Task Force’s grey list for funding organizations with links to terrorist groups. The resulting sanctions will take a toll on the economy, with funds from international countries getting hard to come by.

However, the upcoming polls have reinforced the international community’s infavourable opinion of Pakistan’s approach towards extremism. The country’s election commission has given the green signal to candidates with a history of extremist links to run for office. Affording banned groups the garb of legitimacy by letting them contest polls could be detrimental for the economy.

All the 122 parties fielding candidates in the election have promised social welfare schemes to woo voters. However, fears remain that the invisible hand of the military could steer the electoral process in a direction tangential to that of public opinion. Imran Khan is a former international cricketer who is seen as the frontrunner in these elections. Supporters of PML(N) have alleged that he has the support of the military, and that the democratic process will be subverted to ensure a victory for the cricketer-turned-politician. Khan dismissed the accusations as a case of sour grapes.

The PTI won a majority in the Khyber Pakhtunkhwa province in the last election, and will be hoping to better its tally in other provinces. Imran Khan’s personal life was also in the limelight for the wrong reasons following the release of his second wife, Reham Khan’s autobiography. With Nawaz Sharif incapacitated from contesting the polls on account of a conviction on counts of corruption, the mantle has fallen on the shoulders of his younger brother Shehbaz Sharif. The younger Sharif is currently the leader of the PML(N) and was previously the Chief Minister of Punjab.

He was lined up for the Prime Minister’s post after the conviction of Nawaz Sharif, but the job went to Shahid Khaqan Abbasi instead. Sharif alleged that the military had blocked the government’s efforts at reasserting itself in matters of defence and foreign policy. Bilawal Bhutto Zardari is the scion of one of the most influential political dynasties in South Asia. If the PPP were to win the elections, the 29-year-old Oxford educated Bilawal will be the latest in the line of Bhuttos to occupy the highest office in the land. His mother, Benazir was Prime Minister, as was his grandfather, Zulfiqar. However, it is believed that his father, Asif Ali Zardari actually wields power in the party.
Rohan Abraham
Tags: #Donald Trump #Imran Khan #Nawaz Sharif #Pakistan #pakistan election #Pakistan military #PML(N) #PPP party #PTI
first published: Jul 25, 2018 08:56 am