The two blockbuster affairs that are ready to arrive are Akshay Kumar's Sooryavanshi and Ranveer Singh's '83. 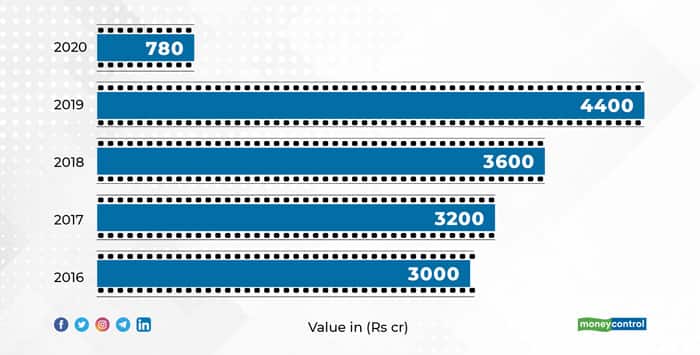 That is the kind of haul that Bollywood box office enjoyed in the last five years. Though growth from 2016 to 2017, and then from 2017 to 2018 was not really phenomenal, the good part was that there was an increase evidenced for sure. However, what happened between 2018 and 2019 was out of the world and hence 2020 was being looked at with great expectations.

Alas, but it all came down with a thud with the pandemic showing its ugly face, as a result of which films ceased to release from mid-March onwards, and as a result the collections stayed way below even the 1000 crores mark.

Nonetheless, with the New Year round the corner, one waits to see how box office turnaround takes place with theatres finally opening up. That said, one thing is quite clear and that's that it would be impossible for box office to go back to even 2016 levels by the time 2021 comes to a close.

The reasons are aplenty.

First and foremost, it is yet uncertain when would the biggies start releasing again in theatres. The two blockbuster affairs that are ready to arrive are Akshay Kumar's Sooryavanshi and Ranveer Singh's '83. Both films have waited for around nine months to arrive at the big screen but Reliance, the producers of the films, are yet to announce the release dates. A lot would depend on the announcement coming around these Rohit Shetty and Kabir Khan biggies as that would pave the way for other movies to arrive too.

Secondly, there is no relaxation in sight around the 50 percent occupancy rule. Considering the fact that theatres would need to continue to operate at half their occupancy, there is still apprehension amongst exhibitors as well as distributors when it comes to releasing biggies. It's a different matter if a smaller or mid-budget film is released with such restrictions but when it comes to big ticket films like these or Salman Khan's Radhe - Your Most Wanted Bhai, Ranbir Kapoor's Brahmastra or John Abraham's Mumbai Saga, these things need to be factored.

Thirdly, for any film to do major business, a lot boils down to students frequenting cinemas. Considering the fact that schools and colleges are still closed, and students are stuck home, one cannot expect parents to allow their kids to venture out for a cinema experience, especially if studies are at the backburner. Youth makes for over 50 percent of audiences when it comes to a 'masala' film and hence its presence is paramount for a biggie to be successful.

Of course, with all such factors coming into play, the biggest conversion could well be brought by the advent of vaccines. Fortunately, while the USA and Europe have started rolling out the vaccination plans, it is not too far away for India as well. This means that by mid-2021, a substantial population would be administered the vaccine. Also, the good news is that even otherwise the pandemic is on a decline and markets are opening up in a big way. As a result, at least the mid-budget films would start making it to theatres in some time for now.

Though that would mean that the first quarter of 2021 would still stay on to be relatively low, things should start looking up from the second quarter onwards with a clearer picture around the aforementioned three pointers. As is the saying, 'a hit film further attracts a hit film', and hence it would boil down to two or three biggies striking gold, which should definitely rejuvenate the industry for a better release planning in the third quarter (around Independence Day, Raksha Bandhan, Ganesh Chathurthi) and the fourth (Dusshehra, Diwali, Christmas).

While that should ensure that 2021 closes on a better note, it would still be unfair to expect it to be anywhere close to even 2016 haul of 3000 crores as the industry is far away from that. If one looks at how Bollywood has fared since the start of the decade, the overall box office stands like this: As long as Bollywood can touch even the 2012 milestone of Rs 2,300 crores by the close of 2021, it would be a win big enough.
Joginder Tuteja is a trade expert and film critic, and loves to talk and write about anything that is related to films. Views are personal.
Tags: #Bollywood
first published: Dec 30, 2020 02:43 pm